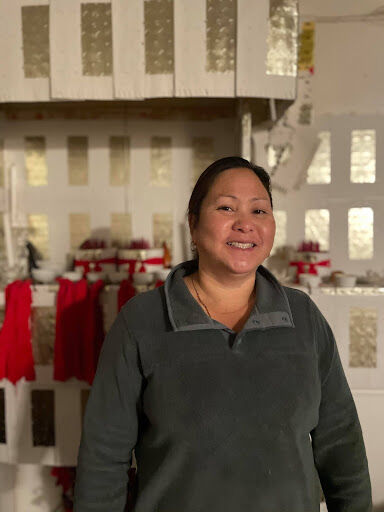 May Yang stands proudly in front of her altar. (Photo courtesy of Alina Yang) 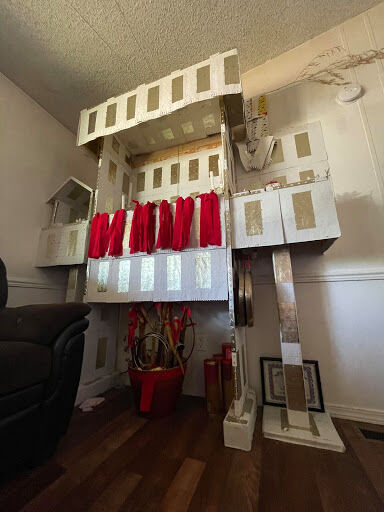 May Yang (author's mother) is a Hmong shaman from Merced, California who many people from the Hmong community have turned to for help when they’re sick, which have become common during the coronavirus pandemic.

Yang began her spiritual journey at 16 years old, when she was forced to deal with illnesses, aches and pains that would not be healed with medicine. Yang seeked help from a local shaman, who revealed to her that she herself had the strength to become a shaman and that it was the only way for her to heal from her aches and pains.

A shaman is someone who has the capabilities of being a physician, dream reader, and a portal to both spiritual and physical worlds. However, she initially ignored the advice. “I was embarrassed and shy. I also didn’t have much guidance as a little girl,” Yang explained.

After finally accepting herself as a shaman at the age of 30, Yang’s illnesses had been healed.

Yang’s ceremonies can go on for hours. During these hours, she is dressed up in traditional Hmong clothing with a red cloth covering her face, and four bells on her fingers. During her performances, she says that there is something in her heart that guides her throughout, referring to them as her healing spirits, called, “Qhua neeb” (kh-ua n-ay).  She chants undecipherable words that could not be understood by the human ear, which she describes as “a song you really love, you want to sing all the lyrics to itt. She also added that there is a never ending list of things to learn, some comes naturally, and some takes time.

A shaman can only do so much themselves, so assistants are necessary for this job. In this case,

On weekdays, Cha is an auto mechanic at Rich’s Auto Body in Merced, California, and on weekends (if scheduled), he is the person who supports May in her healing ceremonies. He explains that the transition into becoming a shaman's assistant is not easy. “You have to not be lazy… you feel tired [but] you have to be responsible for everything.” he said.

During the ceremony Cha has different duties, such as beating the drum, keeping a watch on the shaman while they’re jumping and shaking, burning incense and paper money to send to the spiritual world, and also keeping an eye out for any trespassing people that is going between the shaman and its alter.

An intersection between the shaman and their altar during a ceremony could cause the ceremony to stop and also be very dangerous for the shaman. There are also sacrifices included, such as pigs, cows and chickens.

Cha explained that, at first, he had hard times preparing the altar before a ceremony, as he wanted to make sure everything was absolutely perfect.

When asked about what the hardest part about being an assistant is, he joked, saying that, “Well it seems like everything is hard.”

Cha says that the most important part of being an assistant is making sure the shaman eats well so that they will be healthy enough to help others.

While the shaman is gifted with the ability to communicate with the spiritual world, the assistant is not, but they are still necessary to complete the ceremony.

Many Yang (author's cousin) is a Stan State student who attends these ceremonies. Many first seeked help from May when she was beginning to lose weight for no reason and her taste buds were not working well. After meeting with May, it was said that a ceremony had to be done.

After the ceremony, Many’s taste buds returned and she was able to eat, resulting in her regaining the weight and thus improving her overall health. “I felt much better and relaxed… probably even a little healthier than before,” Many explained.

Another one of May’s clients is Zam Lor, an elderly woman in her 80’s. She explains that she had been dealing with pain in her arms. She said that, because of her old age, she hardly does anything, so she didn;t understand why it hurt so much. She immediately sought out help from a shaman, saying, “For us Hmong people, if we are sick, it comes from our spirit,” and that if medicine wasn’t working, it’s best to ask a shaman for help.

When asked about her experience with May’s healing, Zam said that her arms were relieved of the pain and was able to continue with her everyday tasks and chores again.

Professor Seng Alex Vang, an Ethnic Studies professor at Stan State, is a Hmong man who has grown up around shamans his entire life. Vang and each of the interviewees agreed that shaman healing should not be reserved for members of the Hmong community

“Shamanism is a belief. If you believe it works, it will help, but just like western medicine, it will not heal everything. It is something that can provide spiritual support for some to complement regular medical check-ups and treatment not against it,” Vang said.