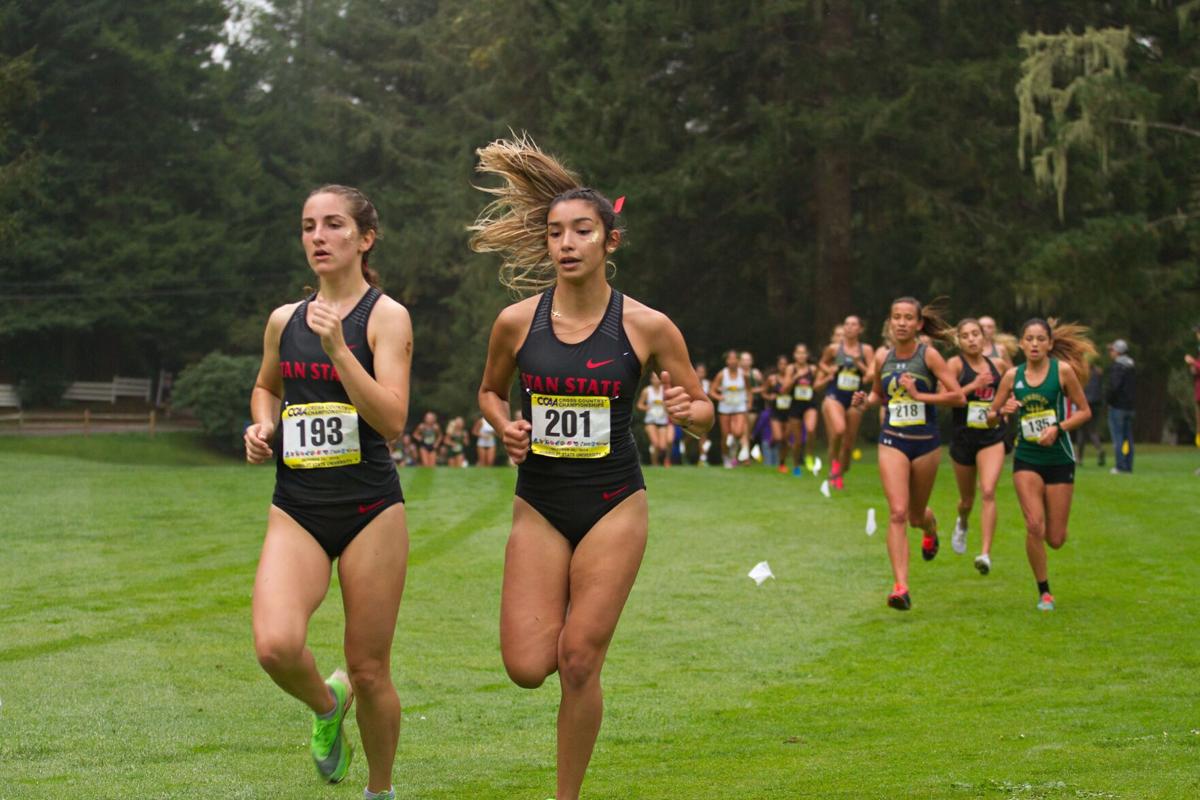 Cross country is one sport that will not have a championship to compete for and may have to wait to compete this school year because of the ongoing pandemic. (Photo courtesy of Warrior Athletics) 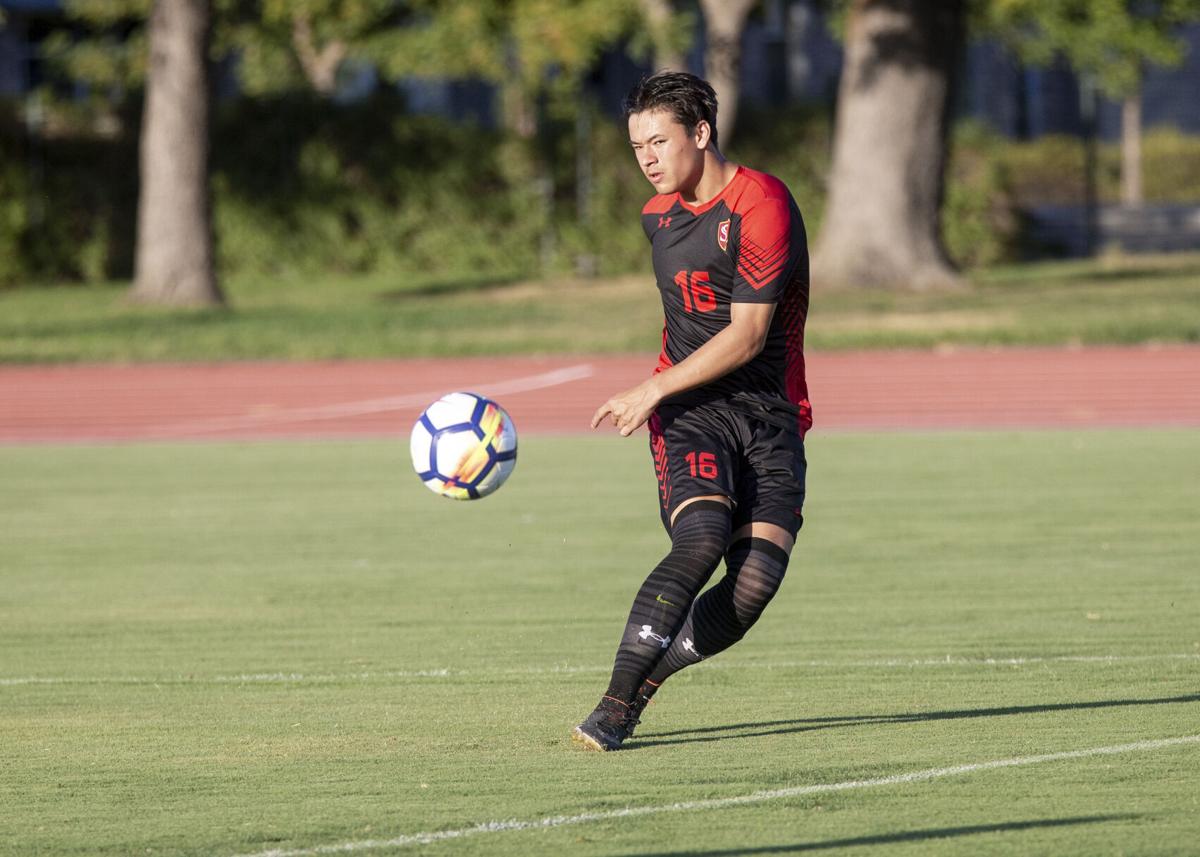 Men's head soccer coach Morgan Cathey says that it's unfortunate that there won't be a championship to compete for this season, but looks forward to when they will be able to compete again. (Photo courtesy of Warrior Athletics)

On August 5, the National Collegiate Athletics Association (NCAA) Division II Presidents Council announced that all fall sports championships would be cancelled because of the ongoing COVID-19 pandemic. The decision came nearly a month after the California Collegiate Athletics Association (CCAA), the division in which Stan State athletics compete in, announced that there would be no sports being played this fall.

“Personally, I am devastated for our student-athletes,” said Stan State athletics director Terry Donovan. “They train vigorously every day to compete in sports they love. Athletics evokes passion for a campus community and our students. I’m heartbroken for our seniors who have spent several years of their lives for a magical year but may miss the opportunity to compete."

Stanislaus State has a total of five fall sports teams, which are men’s and women’s soccer, men’s and women’s cross country, and women’s volleyball. Although these teams are not allowed to play in the fall and there will be no official championship to compete for, they may still be able to play during the spring if it is “deemed safe and appropriate” by the NCAA and the CCAA.

“I feel we have a great head-start on this concept over most conferences across the nation since we suspended fall competition so early. I do think there is a pathway for fall sports to compete in the spring,” Donovan explained. “Our goal is to provide a championship experience for our student-athletes even if it is not what we all envisioned six months ago.”

Morgan Cathey was one person who envisioned this season looking a lot different when he was named Stan State’s new head coach for men’s soccer in January. “It is obviously disappointing for all of the fall sports to have to postpone competing. We love the game and love to be around each other as a team … to have those great parts of the collegiate experience delayed is sad,” said Cathey.

Although it is unfortunate for Cathey to not be able to have his team compete for a championship in his first season as head coach, he says he understands that the decisions were made in an attempt to protect student-athletes. Nevertheless, Cathey is hopeful that by January of next year, students can return to campus and continue to build towards their goals and aspirations.

Donovan says that all athletic directors in the CCAA are currently working to figure out the details of how practices and competitions would look like if it is finally allowed. “We are preparing for various scenarios, but all are cognizant of the NCAA, CCAA, and local health guidelines. We are committed to the health, safety, and well-being of our students. Any pathway towards resumption of competition would begin with the safety of students in mind,” Donovan says.

Sabrina Garcia (senior, Biology) is a member of Stan State’s cross-country team. Like Cathey, Garcia was initially upset upon hearing the news, but she says she wasn’t surprised. “I guess the sudden cancelation of the spring sports [last semester] and the way things were going throughout the summer kind of cushioned the blow.”

Garcia is optimistic that all fall sports, especially cross country, can have the opportunity to compete to some extent at later dates. “I definitely think we could work something out for the spring. Our sport is year-round with cross country in the fall and track in the winter and spring, so it may be difficult to squeeze in a series of cross country meets… if they can somehow work out a schedule for us to compete in the spring, then we will be ready for it.”

In the meantime, the CCAA will give schools and teams the opportunity to move forward with training and practices if given permission by the state and public health experts. “Team activities, practice and training opportunities will be determined and defined by each member institution with the approval of the University president and the Cal State system and shall adhere to local and state public health regulations. All applicable NCAA playing and practice season rules will be followed,” the CCAA’s statement explained.

As to whether Stan State’s fall sports teams will actually try to practice and train through the fall, Donovan says that he would love for that to happen. “As an athletics department, there is nothing we would like more than to resume normal operations and compete,” Donovan said. “There are many studies [and] surveys nationwide that show damaging effects on student-athletes’ mental health due to cancelling sports. We need to resume athletics participation for the well-being of our staff, coaches, and student-athletes. I would absolutely welcome student-athletes back on campus,” Donovan continued.

While Donovan would like to have students back on campus and to have student-athletes competing, he believes that it’s not close to happening anytime soon considering Stanislaus County’s high infection and transmission rates.

“Data on Covid-19 seemingly changes weekly, so if our region slows the infection rate, it is possible President Junn and the University cabinet permits student-athletes back on campus for the spring in the weeks and months ahead. If it is still unsafe to do so, then we will continue to provide instruction to our student-athletes in a virtual environment,” Donovan explained.

Garcia has a similar view when it comes to returning to campus. “As much as I would love to train alongside all of my teammates, it would be very difficult for me to do that just because I live at home with my family,” Garcia said. “It's a decision that we would all have to discuss together. At the end of the day, I will always put the health and safety of my family and teammates first.”

Garcia says that she and her teammates have found success communicating, training and preparing for a potential season in the department’s remote format. “This year was a bit different due to the social distancing guidelines, so we were not able to train together as we would have liked,” Garcia explained. “Workouts have been similar to what we would be doing if we still had a normal season. All in all, in terms of training and preparing for the season, things have been business as usual.”

In terms of eligibility, the Division II Administrative Committee approved waivers which state that Division II student-athletes will not be charged with the use of a season for the 2020-21 academic year if their team only plays 50% or less of their seasons due to the COVID-19 pandemic. Student-athletes who qualify for this waiver will also receive an extension of their 10 semesters/15 quarters of eligibility if the student-athlete would have been eligible to compete during the 2020-21 academic year.

Cathey is hopeful that everyone can do what is needed to help slow the spread of the virus so that teams can compete to some extent in the coming months. “We are hoping that the protocols and processes will continue to move into place that would allow us to practice and compete in the Spring. This would obviously ensue only if this virus is under control and we hope everyone involved can put in the collective efforts to ensure we do our part.”

Donovan had a similar and sterner message for the community regarding efforts being made to slow the spread of the virus. “If you want to see athletics resume at Stan State, as well as sports on a national level, everyone should wear a mask. I consider wearing a mask a minor inconvenience, but well worth it if it slows the spread of this deadly disease.”

Garcia says that she is thankful for her coaching staff and the athletic department as a whole for doing their best to keep student-athletes informed and prepared throughout the pandemic. “There is no handbook for things like this, and it has been a blessing to have such amazing people there to help us out,” Garcia said.

The campus community is encouraged to regularly check the Warrior Athletics, CCAA, and NCAA Division II websites and social media accounts for up to the minute updates regarding the status of athletic competition amid the ongoing pandemic.