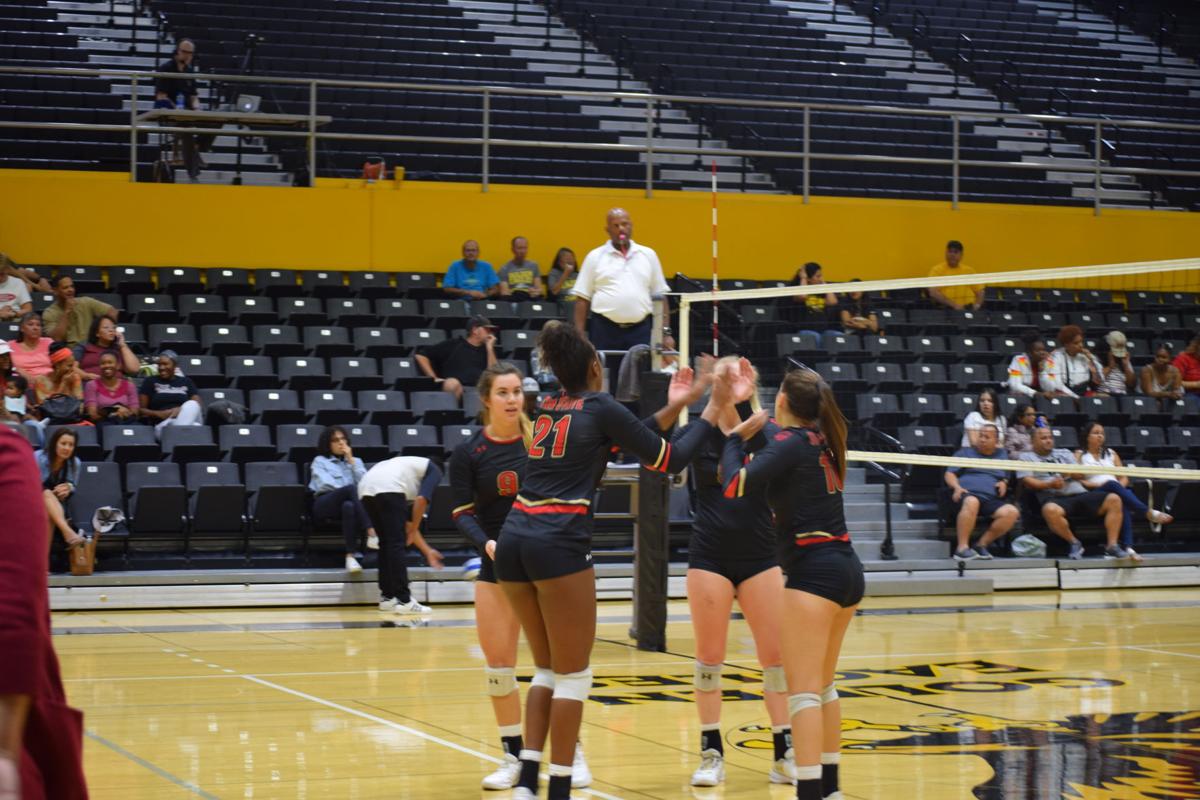 Despite facing a hard loss, the Warriors chose to stick together and be a team. 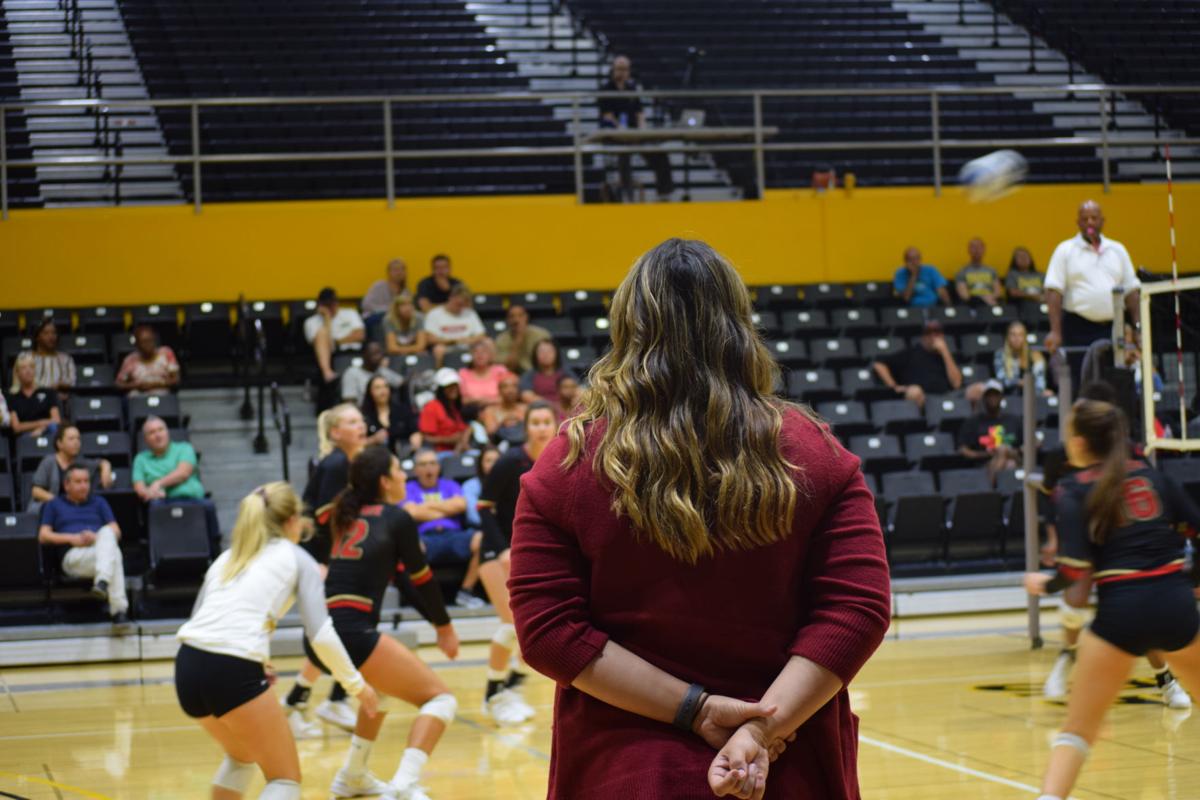 Coach Mallori watching her athletes attentively from the sidelines. Whenever her team began to lose energy, she became the motivator. She is consistently great at reenergizing the women that play for her and reminding them of their strengths and capabilities.

The CSU Stanislaus Warriors Volleyball Team traveled to Southern California to face CSU Los Angeles’s Golden Eagles on Saturday, October 20, 2018. This match was a three up, three down situation in sets. Only three sets were played and all of them were won by the Golden Eagles. This team has only lost one match during its entire season.

When asked if knowing the record of the opposing team had an effect on the Warriors’ gameplay, some of the women on the team agreed that it did not.

Alana Wilson-Reid (Senior, Criminal Justice Major), said, “In the beginning, I believe their record did make us go into the game knowing that it would be a tough match.” This was Wilson-Reid’s initial thought, then she and the rest of her teammates watched film of CSULA and her mind was quickly changed. “We are totally capable of competing with CSULA and even possibly coming out with a huge win.”

Wilson-Reid’s teammate, Yisel Perez (Sophomore, Kinesiology), had different reasons for believing that her team had the potential of achieving a victory on the road. “We know the capabilities of our own team if we just play OUR game. I think we were mentally prepared for the game, but once we started playing it felt less energetic which caused us to fall behind.”

Any fan of the Warriors’ volleyball team would have been able to notice that something was off. Perez would also agree and say, “The inconsistency and energy are what went wrong. Our weakness would have to have been the urgency to compete and put a ball away.”

Mackenzie Morris (Freshman, Chemistry Major), said the team’s weaknesses varied throughout the sets. She said that it seemed to be the basic fundamentals that were missing.

Wilson-Reid would agree with Morris about the weaknesses changing throughout the night. “It varied each set, starting with our defense and receiving, then once we got that under control our offense began to struggle.” She continued saying, “Also, we were missing some key players this weekend due to injury. Without Sierra or Mya, we had few options to make changes when players were struggling. Also, Sierra has been our kill leader in the last few weeks of our season averaging 20+ kills per game. Our offense was definitely missing her."

Despite varying opinions on what the team’s weakness was, the women were on the same page when it came to their strength. Despite not winning, the women stuck together for a team and kept pushing each other and cheering one another on.

One athlete that stuck out for her communication was Wilson-Reid. Some fans in the audience mentioned how they enjoyed her communication with teammates and encouragement for them from the sidelines. When Wilson-Reid heard this she was surprised as she didn’t realize people were watching her so closely. “It makes me feel really good to know that people see who I am for my team. As a leader on the team, I am constantly trying to keep my team motivated. Volleyball has been my life for a long time and I know that I can help my team both on and off the court. I always try to focus on my game and do the things that I know I can do to support my team and help us win. I don't let mistakes, mine or my teams, ride on me to take me out of the game. I keep my head in the game and constantly look at how we can improve.” She wants to say thank you to those who complimented her for their kind words.

Another athlete who stuck out in this game, for her performance rather than her communication, was Ramey Gardner (Senior, Business Administration Major). Her teammates complimented her aggressiveness, consistency, and drive.

Morris said this of her teammate, “She always gives her 110% effort and she was really scoring points for us.”

When word got back to Gardner of her team’s unanimous decision on her performance she was honored. “It feels really good to know that my teammates see me as all of those things. I try to give back to the team in whatever way I can and it is always great to hear their positive feedback.”

Another driving force for the team was their coach, Mallori Gibson-Rossi. Coach Gibson-Rossi was constantly motivating her team to be the best players that she knows they can be. She also was pushing them to keep up their levels of aggression when attacking the ball to make a kill.

Wilson-Reid said this of her coach’s support. “Coach Mallori just kept telling us to stay confident, believe in ourselves, and to show heart.”

There was a young fan in the audience who traveled from Murrieta to watch this game. It was the first college game that she attended. Zoe Piche is twelve years old and currently plays club volleyball. She got the opportunity to meet both head coach, Mallori Gibson-Rossi, and assistant coach, Megan Powell. She was so awestruck that she did not have much to say or ask. However, some of the women on the team had advice to offer her and other young volleyball players.

Wilson-Reid said, “My biggest piece of advice is to surround yourself with people who are better than you to push you to achieve the next highest level. When you are surrounded with people who play at a higher level than you, you keep striving to meet their level which makes you improve. Also, keep loving the game. Watch collegiate volleyball, learn volleyball, ask questions, get extra coaching. Remember that when you are resting, someone else is practicing/learning the game.”

Perez offered this advice, “My advice to her or other young aspiring volleyball players would be to take advantage of every rep(opportunity or play) at practice and never get complacent because you can always be better. Don’t work until you do something right, work until you don’t get it wrong.”

Morris shared this tip, “To young volleyball players, I would say to start networking with coaches in your early years of high school, and just to have fun and play the game. Always be open to taking in new information, and the fundamentals, even though they may seem boring, are what make a volleyball player great.”

Gardner said, “Honestly, my advice to her and to all young athletes would be the same thing that my parents always told me; do the extra. My parents would always tell me that if I wanted to be successful, I needed to do more than what everyone else is doing. Whether it is going in for extra reps in the gym, doing extra workouts, watching film on your own time, mentally prepping before a game, etc. Those are the things that make the biggest differences and that set you apart from the crowd.”

The team then traveled to San Francisco State University on Tuesday to face the team for the second time. Despite beating this team in the first match-up, they fell short this time around. The Warriors lost three sets to one. It was a hard loss, but the women are choosing to stay strong and keep working hard for the games coming up this weekend. They will be spending part of the week focusing on going into games with a clear head and strong mentality.