You are the owner of this article.
Edit Article Add New Article
Stan State News
Campus Culture ▼
Neighborhood
La Letra Ñ ▼
Opinion ▼
E-Edition ▼
Archive
Multimedia ▼
About Us ▼
Share This
1 of 7 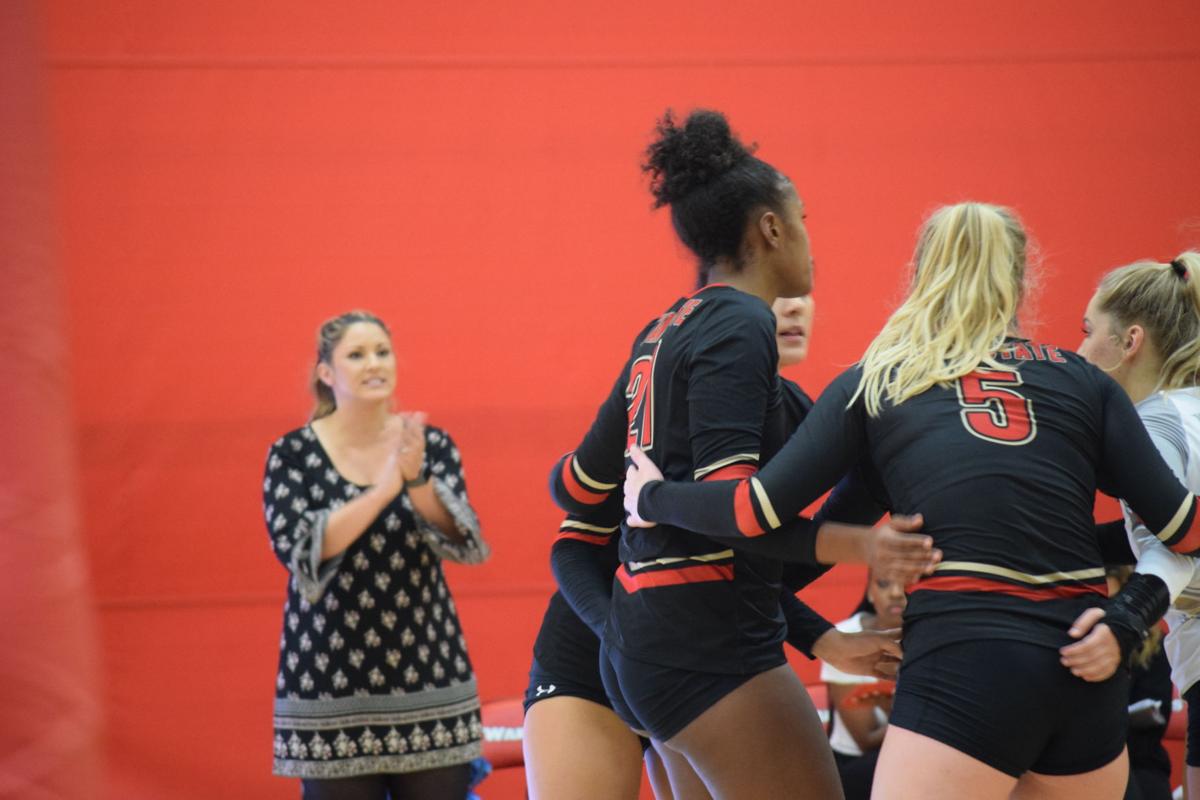 Coach Mallori standing proudly on the sidelines. "On Saturday morning I sent a text to the team which included 10 characteristics of a champion from an article I read. I encouraged them to focus on those leadership qualities as it would help us to be fierce warriors on the court. I believe our team not only read those qualities but also soaked up a deeper meaning of each of those qualities. During several of those moments where the sets were tied or within a couple points of each other, I reminded them of some of those championship behavior words like fierce, relentless, fearless, tenacious, supportive, competitive. It kept the focus on things we could control rather than the unpredictable results of our sport." 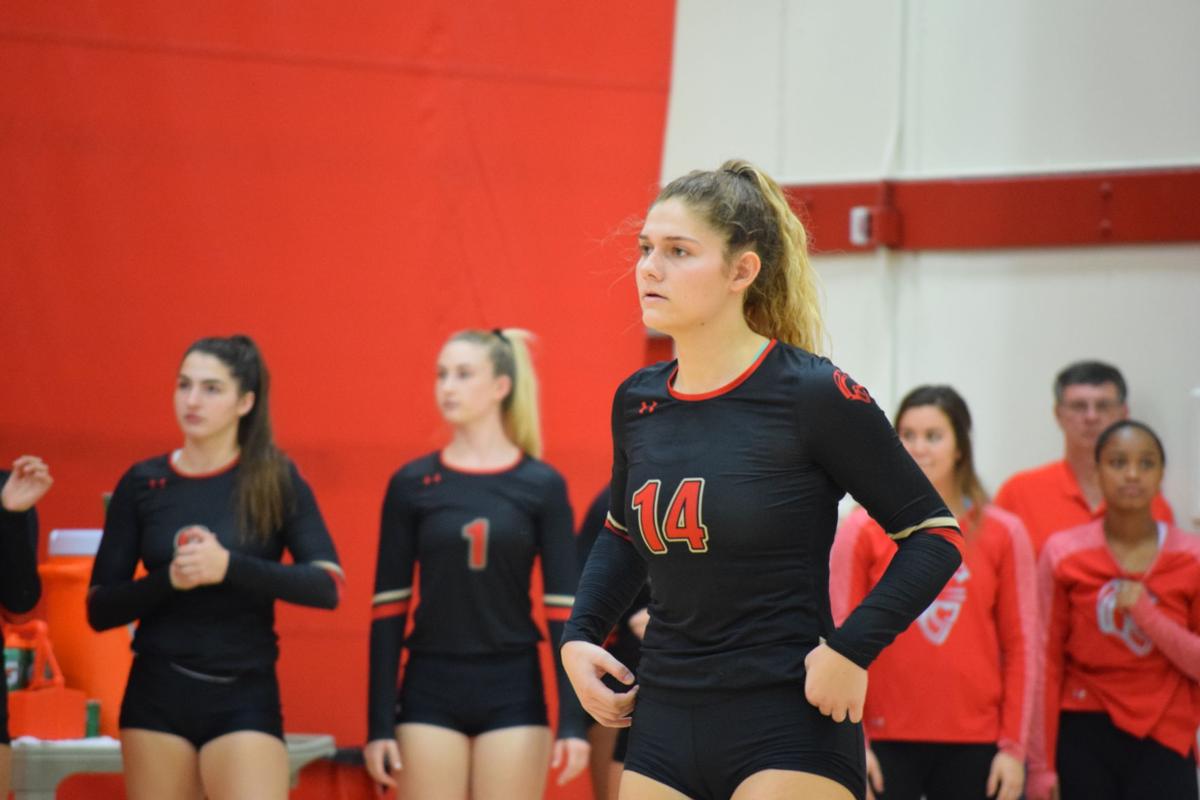 Klopfer recounted, "The intensity and motivation comes from us loving the game of volleyball. We have talked so much about what we need to do to compete but the #1 thing we needed was to remember how much we love volleyball and the rest will follow." 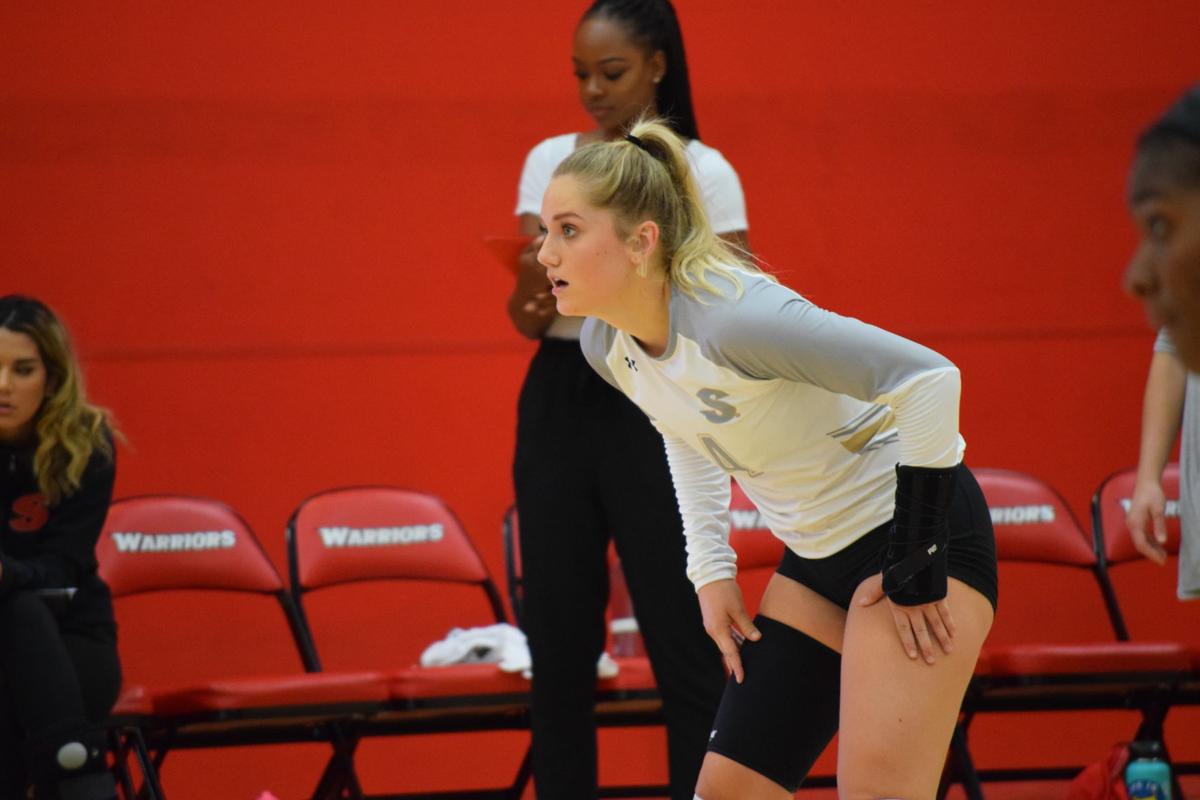 Chelsey Berry staying focused on the sport that she loves. She said that communication is a key fundamental in this sport. "Usually in between servers we are talking about open spots to hit to so I’ll give them spots or shots to hit. The constant communication is what helps us play our game and get inside the other team’s head and shuts them down." 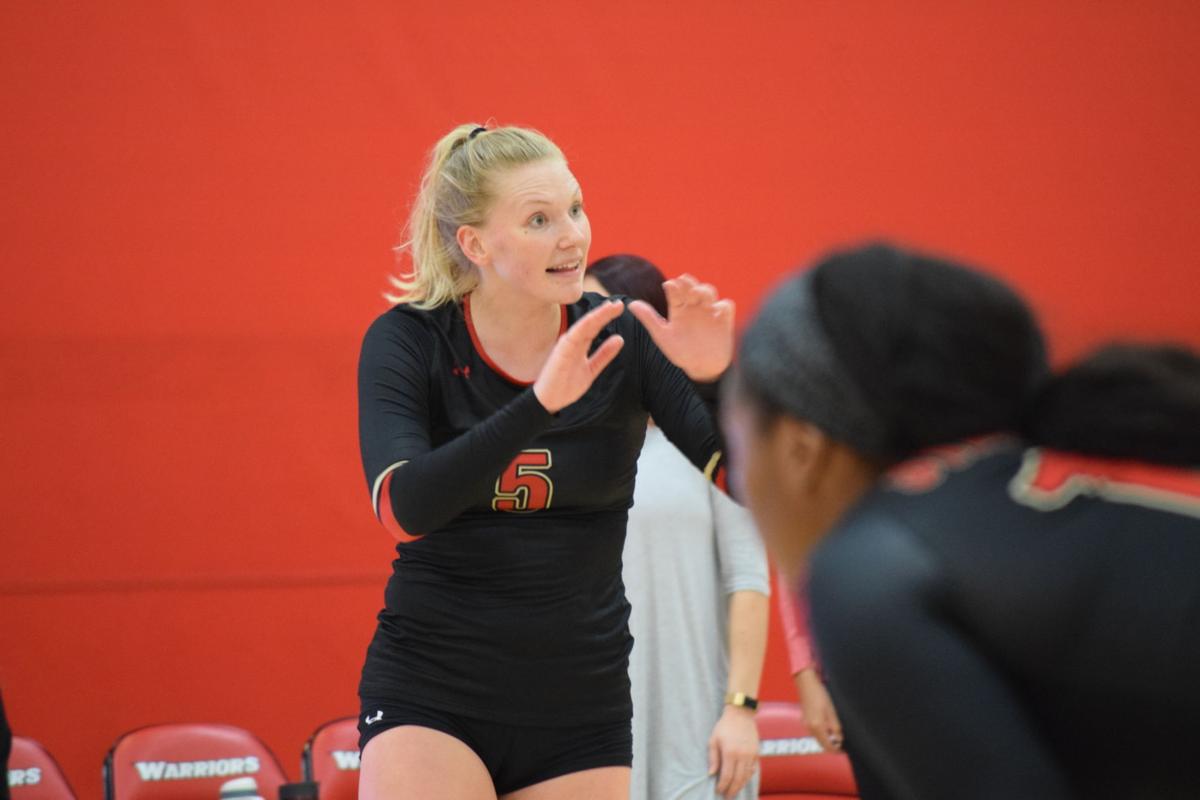 Ramey Gardner communicating with her team. "Volleyball at this level is such a mental sport, so any time that we talk between points its mostly to just refocus. A lot of times I try to give the passers confidence and remind them not to focus on their mistakes. Same thing with the hitters; if our offense is lacking, I try to keep the hitters accountable and make sure that they are staying aggressive. This is also a reminder for myself to make sure that I am doing my job, and that everyone is on the same page." 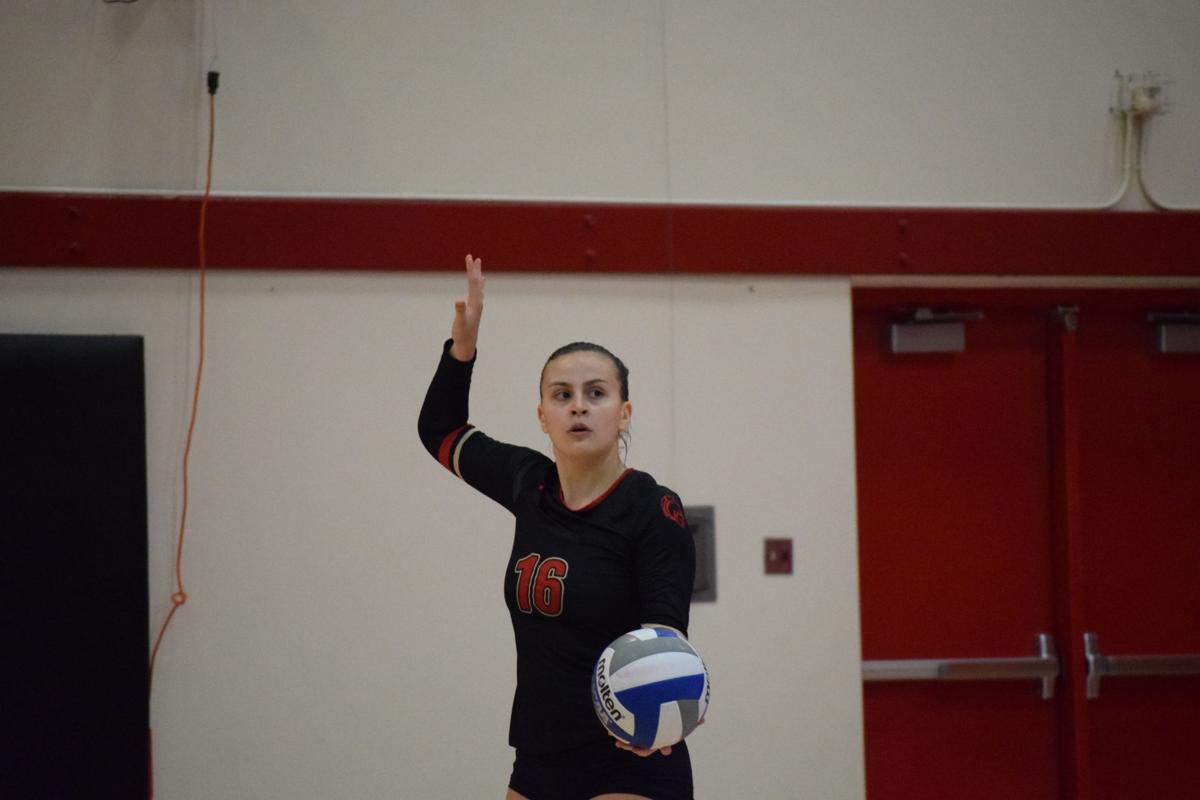 Breanna Cannon preparing to put the ball into action. 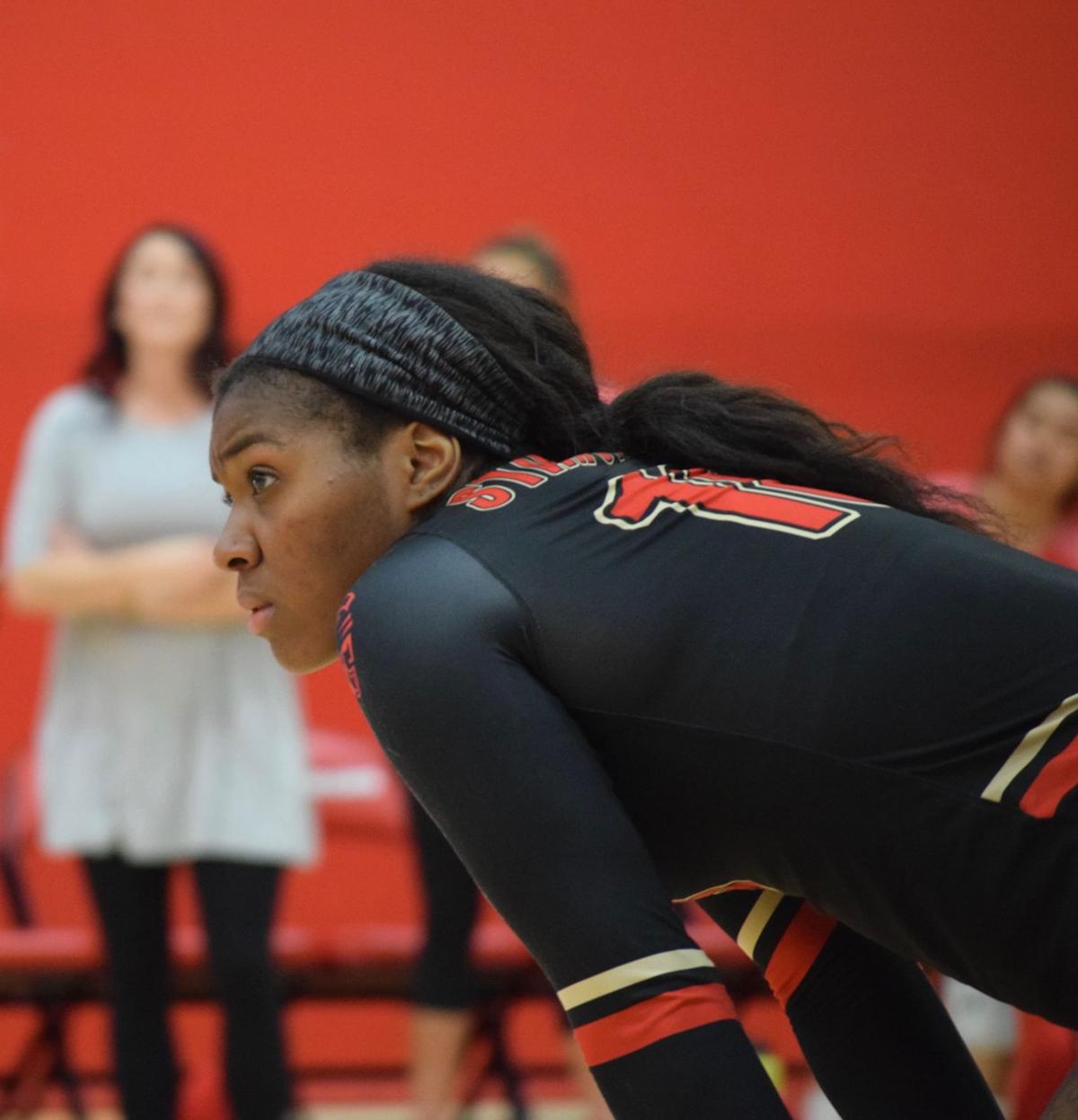 Up close and personal with Sierra Adams. She remains focused on the game and determined for success. Both of these paid off and Adams went on to beat her own personal best for most kills in a single game. 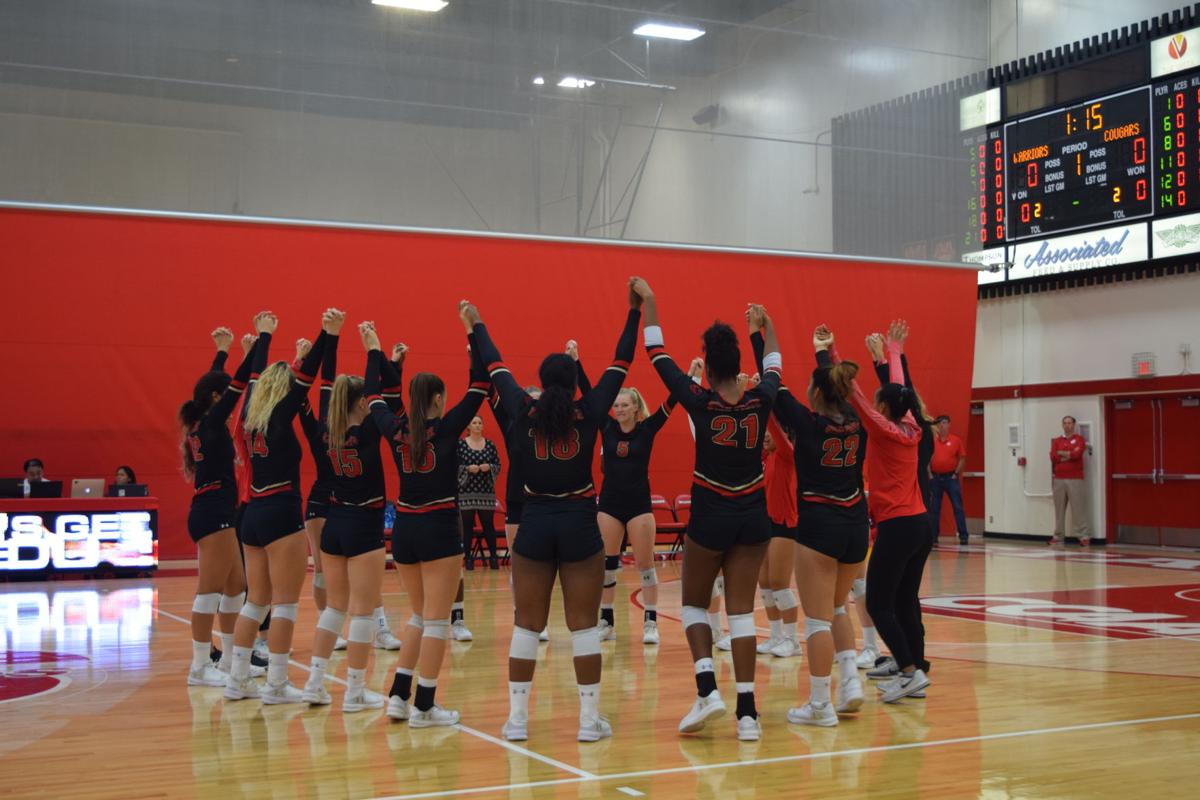 The women stand together in unity for a pre-game team huddle.

The Stan State Warriors faced the CSU San Marcos Cougars on Saturday, October 13, 2018. The Warriors started out strong and swept the floor with the sleeping Cougars in the first set. In set two, the Cougars woke up and took the win. Sets three and four were won by the Warriors, but not without a close battle. This put the Warriors up three sets to one, thus taking a big victory.

The team has struggled in the past few games with their defense, maintaining intensity levels, staying mentally strong, working together as a team, and finding their momentum. Coach Mallori Gibson-Rossi agrees that these were issues for her team. “Against CSUMB, the lack of mental focus caused us to play as 6 individuals on the court rather than one team. We weren’t staying present or focused so then we focused too much on mistakes from the last rally or the last set which caused us to be out of position. Last week in practice, we went back to the basics to focus more on the process and less on the outcome. This approach allowed us to improve our mental focus in our matches against UCSD and San Marcos and resulted in us being fundamentally sound.”

None of those were the case in this game. The women came out strong and ready for a fight. They were ready to have the taste of sweet victory once again, and boy, was it sweet!

Rachel Klopfer (Sophomore, Physical Sciences Major) said, “It always is such a great feeling to get back to winning after taking a couple of losses in a row. The biggest change between our last two losses and Saturday's win was just our mentality! We came and we did what we needed to do. We never broke our focus.”

Coach Mallori was especially proud of her team’s performance. “We could have responded two different ways after the loss on Saturday. We could have been discouraged and still thinking about the loss, or we could see San Marcos as another opportunity to achieve excellence. I am very impressed our team chose the latter option. We created a sense of urgency on Saturday to take care of business.”

While the victory was sweet, it was not earned without a fight. The Cougars brought their game, but their fans that brought their noise. Their fans traveled well as there was a medium-sized group in the stands. They were so loud and made the large crowd of Warriors’ fans seem tiny. Their noise was distinctive from the stands, but the women on the team disagree.

Chelsey Berry (Sophomore, Communication Studies Major) never noticed the cheers of the Cougars’ fans. “I don’t think their energy affected us in any way.”

Ramey Gardner (Senior, Business Administration Major) said, “Honestly when you are on the court it is hard to tell what side the noise of the crowd is coming from.” Her teammates Breanna Cannon and Rachel Klopfer agree. Klopfer says, “We try to take whatever energy is in the gym and use it to our advantage. So even when we are at away games or any games that have a big, loud crowd for our opponent, we just try to absorb the energy and use it for ourselves, rather than focus on who's cheering for who.”

Coach Mallori heard the noise from the crowd and was able to distinguish the difference between the cheers.

Coach Mallori on the Crowd's Volume

“It seems like San Marcos always has a good crowd traveling with them on the road. I don’t think that them being loud had an effect on our team, but I do believe that our team was motivated to work harder once our home crowd got louder. On one of our set points, the San Marcos player missed her serve which gave us the win for that set. As I reached to grab my folder I told my assistant “That point goes to the crowd” because they were on their feet and fired up which created a little more pressure on the San Marcos server.”

It wasn’t until set three that things in the stands really took a turn. The Warriors’ fans grew frustrated with the volume of the Cougars’ fans and started to increase their volume. The women found their momentum on their own, and the crowd helped them maintain it.

Gardner said, “The more noise the better. I like it when the crowd gets involved, and I'd say that our team feels the same way. We feed off of the energy. We love and appreciate the support.”

Klopfer said, “We definitely can feel when the energy in the crowd shifts! It always gives us a little extra push and encouragement when we see friends, family, and other students in the stands cheering us on!”

Breanna Cannon (Sophomore, Chemistry Major) said, “I did notice the shift in energy once the match got close in the third set and we won. It's always encouraging knowing that my friends and family are watching.” Cannon is one of the many athletes on the team that is from out of state. “It motivates me to do better, especially with my parents watching all the way from Arizona online. I love knowing that even from another state they are still cheering me on.”

While many enjoy a “blowout” match, those can get boring fast because you can guess the final outcome. That is why this game was so exciting. It was too close to be able to predict the winner. Fans of both teams were on the edges of their seats. The energy in the Fitzpatrick Arena was absolutely electric.

Warrior Rewind was also there covering the game. The reporting team was front and center getting footage for this week’s episode. Head producer, Megan Lavilla (Senior, Communication Studies Major) was cheering loud for her team. When she was asked about the game she too enjoyed the electricity in the air. “The game was intense, like freaking intense. I liked that throughout the third set how even when we were a little bit behind we still found a way to come back and tie the game, and eventually win it all.”

In the end, the women worked hard, and they did so as a team. According to Coach Mallori, Cannon was leading the offense and ended up providing her team with fifty-four assists. She continued on that Cannon’s teammates Sierra Adams and Ramey Gardner were able to capitalize on these assists and turn them into kills. Gardner finished the night with eighteen kills and a hitting percentage of .293. Adams was able to complete twenty-four kills at a .468 hitting percentage. She not only achieved a personal best, but she was also one kill away from tying Stan State’s record for most kills in a single game. In addition to Cannon’s assists, the Warriors’ offense was strengthened by Berry’s consistent passing. Berry’s passing game allowed the rest of her teammates to be able to focus on the other aspects of the game.

Klopfer was excited for the accomplishments of her teammates. “The highlight of the game for me was near the end when Sierra was getting close to breaking the record for kills! Everyone was so excited and cheering as hard as they could as she got closer and closer! One of the best things about this team is that we all genuinely are rooting for each other’s individual success.”

While each of these women had an impressive game, it is when their personal successes were combined that they became really significant. They took the win, and they did it as a mentally sound team!

The Warriors will be on the road this weekend. They will face CSU Dominguez Hills on Friday, October 19 at 7 p.m. Then on Saturday, October 20, at 5 p.m., the Stan State Warriors will head to CSU Los Angeles to compete against the Golden Eagles.

The women have found their drive and want to keep it. Coach Mallori is happy that her athletes have found their momentum again, and she has plans on keeping it. “I have learned that our team thrives best when given mini process goals that lead us to our ultimate goal. I plan to keep the focus on tasks we can control such as our work ethic, energy, and attitude."