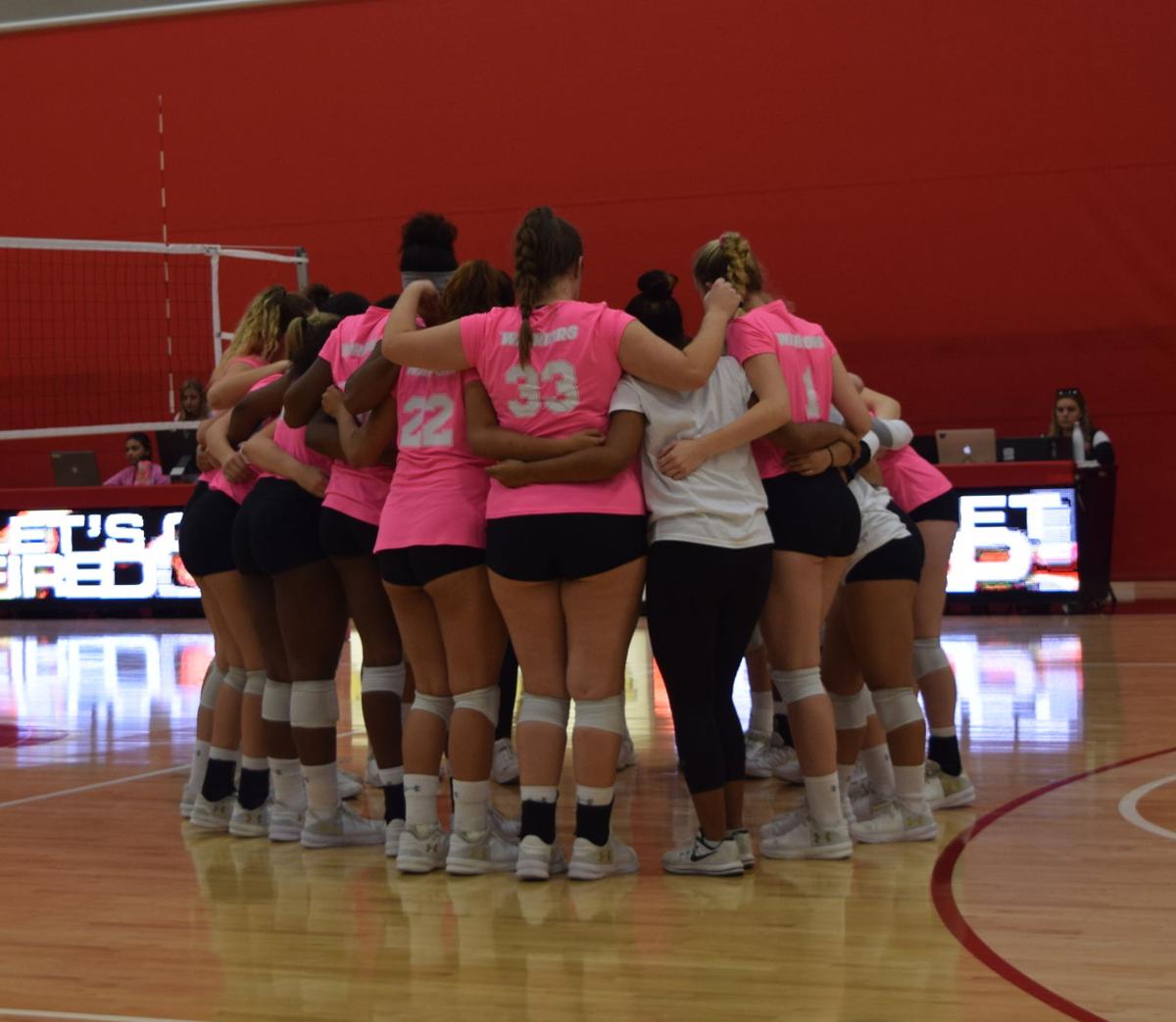 The Warriors stand together before the game starts. They take this time to get mentally prepared for the game that they are about to play. 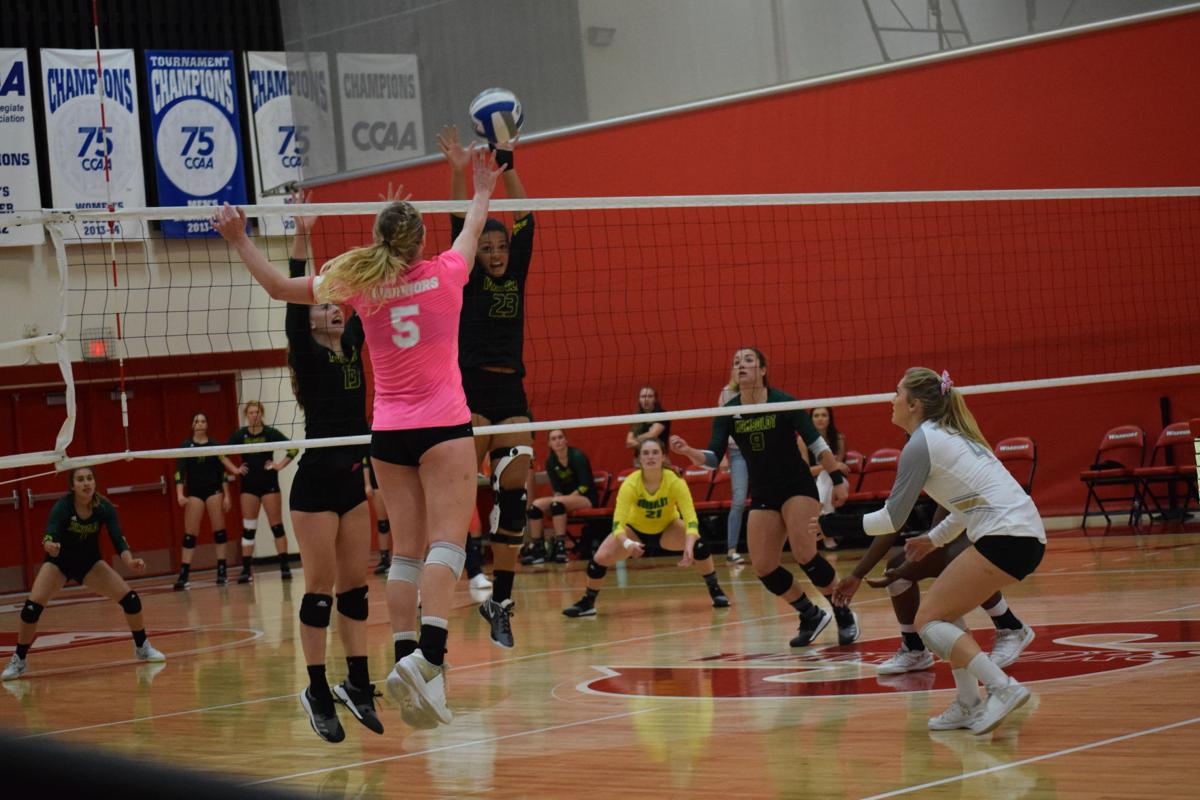 Ramey Gardner tippng the ball over the heads of the Jacks' players in order to earn her team a kill! 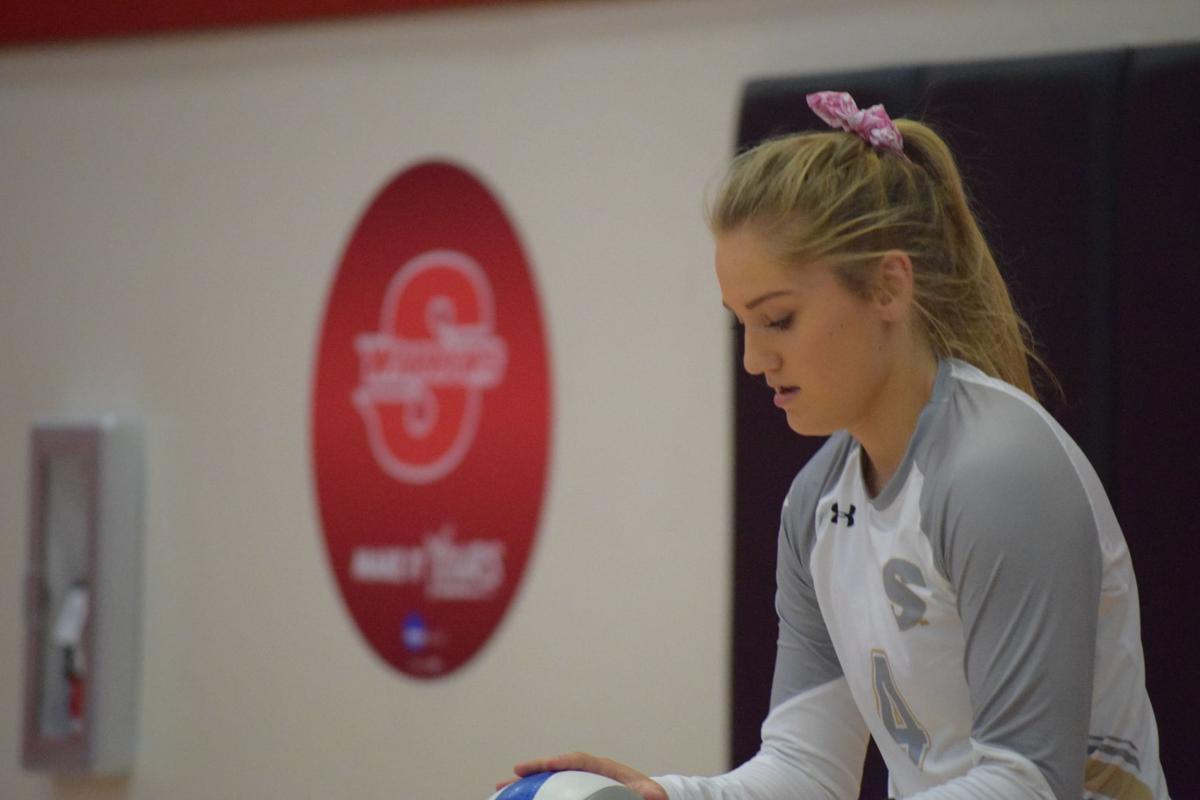 Chelsey Berry believes that team chemistry is crucial in the sport of volleyball. "You are playing for the person next to you to make sure they get a good set, and get a good hit and so on it’s like a chain reaction. I have so much love for the girls and one thing that I did for the starters is make hand shakes with them to show that we are in this game together and it’s also gets us pumped up but also shows the chemistry. 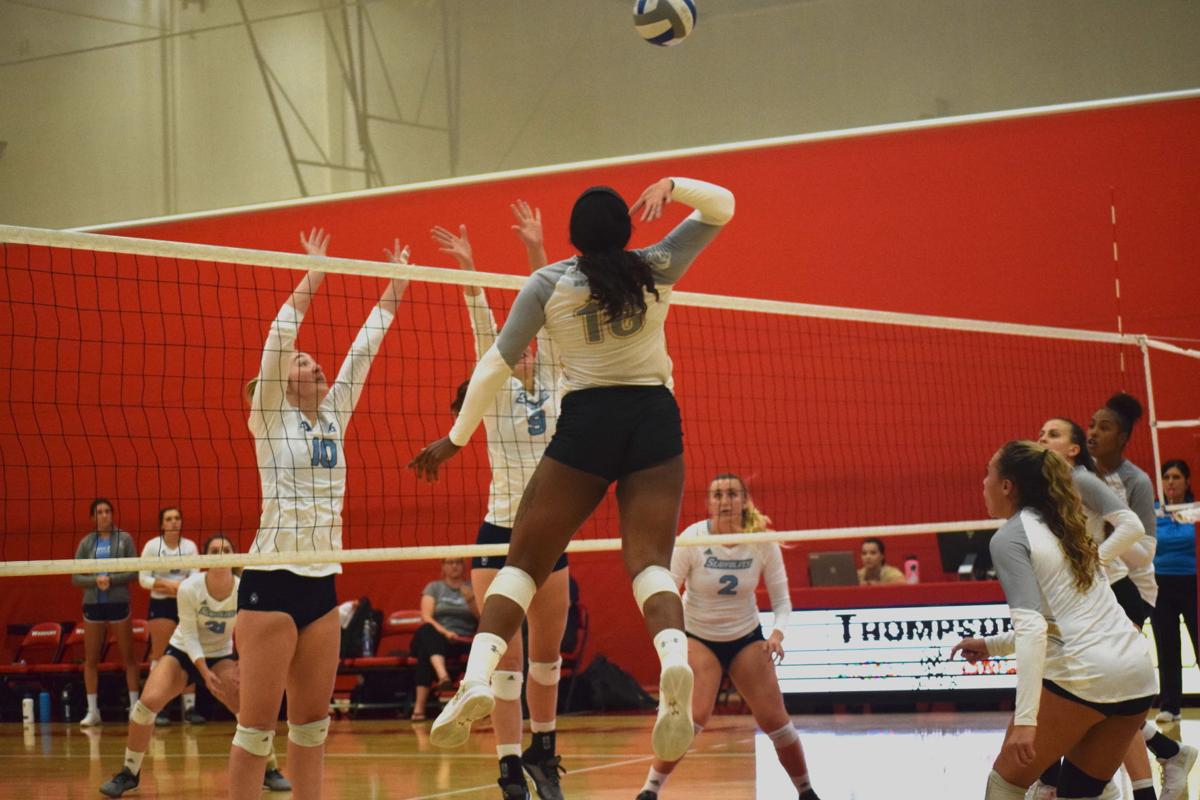 Sierra Adams had two great back-to-back games this weekend. She led in kills both nights. "I am trying to be at the top of the CCAA for Kills and every weekend I am trying to achieve that goal. Last weekend I was one step closer and it is exciting. It feels amazing knowing that I had a high contribution to the team’s success, Mallori always tells us to go out and be rockets on defense and to have a killer instinct at the net and that is what I strive to do." 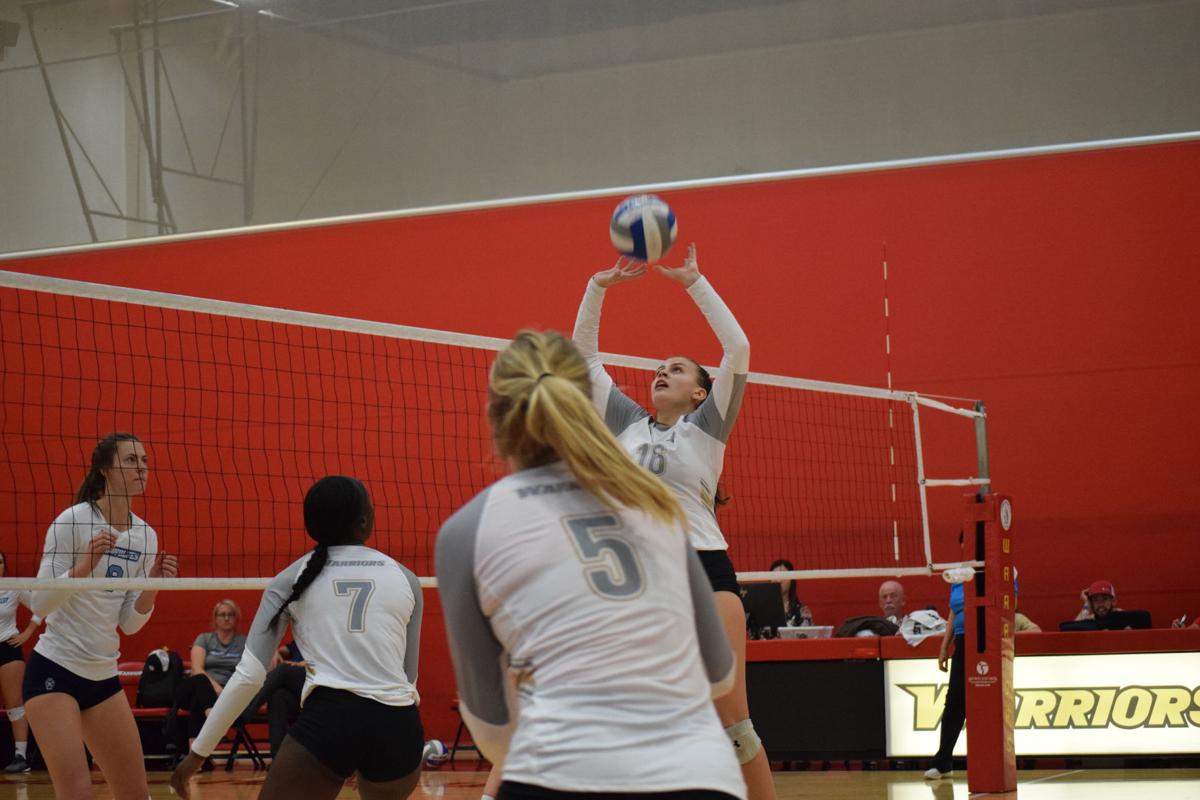 Breanna Cannon had a strong couple of games by leading in sets. "My hitter's success is my success. So, knowing that their high performance mixed with my higher assist number created such a nice flow and offense keeps me motivated to keep working hard and doing whatever I can to help our success. I was very proud of my work last night and getting constant feedback and encouragement from my hitters kept me focused on pushing myself to do even better each set." 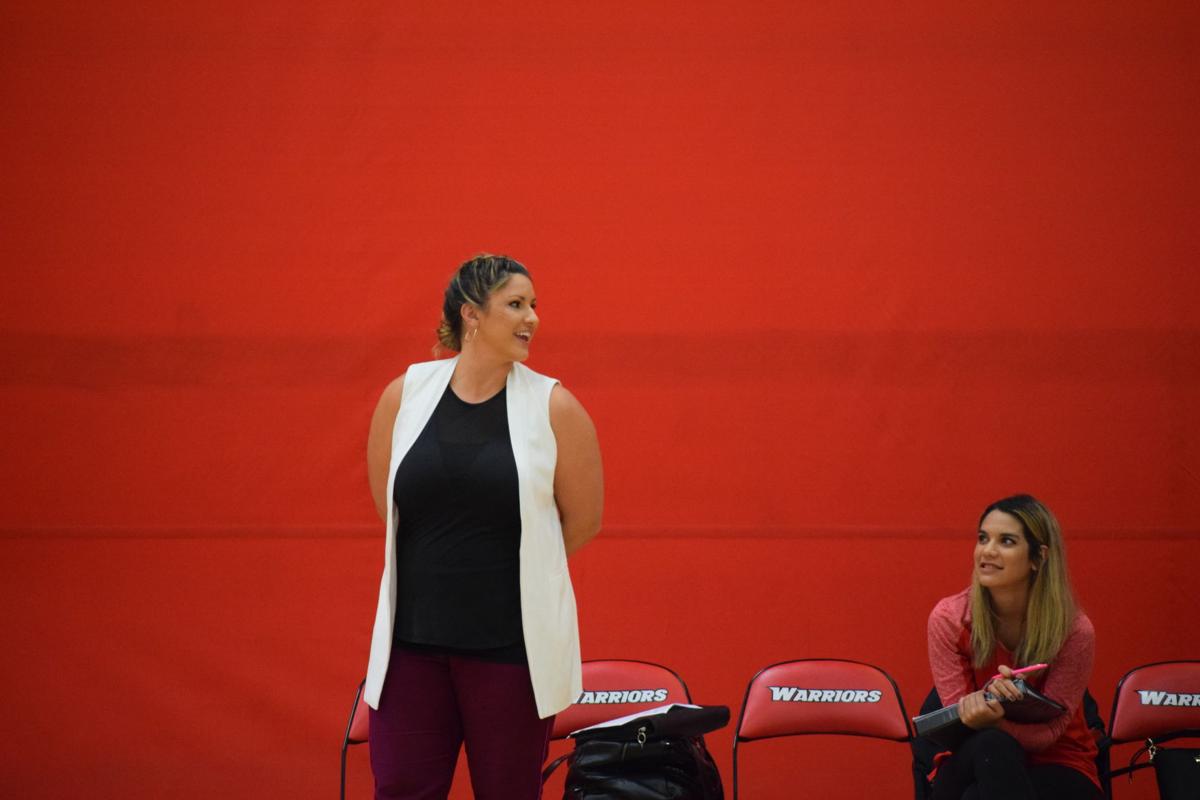 Coach Mallori could not have been more excited to see her team's hard work finally pay off.

The Warriors faced the Jacks from Humboldt State for the second time this season on Friday, October 26, 2018. The Warriors took the win. The sets in this match were three up and three down. This win was especially sweet as it pulled the Stan State Volleyball Team out of a three-game losing streak.

This match was also the Breast Cancer Awareness match for the volleyball team. They titled it “Dig for a Cure.” Before the match started, they had pink shirts for sale that said “Warriors” on them. The shirts ran for $10 each, and all of the proceeds went back into cancer research.

Ramey Gardner (Senior, Business) felt especially connected to the cause behind Friday’s match. “Playing for this cause is such an honor and so important. My Nana is actually a breast cancer survivor...so this game does mean a lot to me...This match is so much more than just wearing a pink jersey, it signifies a lot for many people and I am glad that I get to be a part of it each year.”

The team’s victory at this match seems to have been a symbol for a victory against cancer. You need to win the battle before you can win the war. That is exactly what the team did in claiming the win in this match. The season isn’t over yet, but they are one step closer.

The Warriors took part in their second game of the weekend on Saturday, October 27, 2018. In this match, they faced Sonoma State’s Seawolves. For the second night in a row, the Warriors emerged victorious, winning three sets to zero.

After a season long battle with finding the team’s strong defense, things fell into place. The women on the team played with great chemistry and communication between each other. Their hard work had finally paid off.

Sierra Adams (Junior, Psychology) said, “We have been working hard on and off the court –between watching film and constantly making each other better at practice. For it to finally come together was encouraging. It makes us feel like all of our hard work is paying off.”

Breanna Cannon (Sophomore, Chemistry) agreed with Adams about having the team’s hard work finally pay off. However, she felt that part of the team’s defensive strength stemmed from the team’s ability to adapt quickly and make needed adjustments.

Chelsey Berry (Sophomore, Communication Studies) was excited about her team’s performance over the weekend. “Our defense was on fire which helped with running our offense. It’s crazy how we can dominate as a unit and have everyone doing their jobs because it really takes everyone’s physical and mental ability.”

Most of the action in Saturday night’s match took place at, or near, the net. This is what required the Warriors’ defense to step up and protect their territory.

Coach Mallori Gibson-Rossi kept her team motivated. She continued to encourage them to take each set one point at a time. The team also took each match, one at a time.