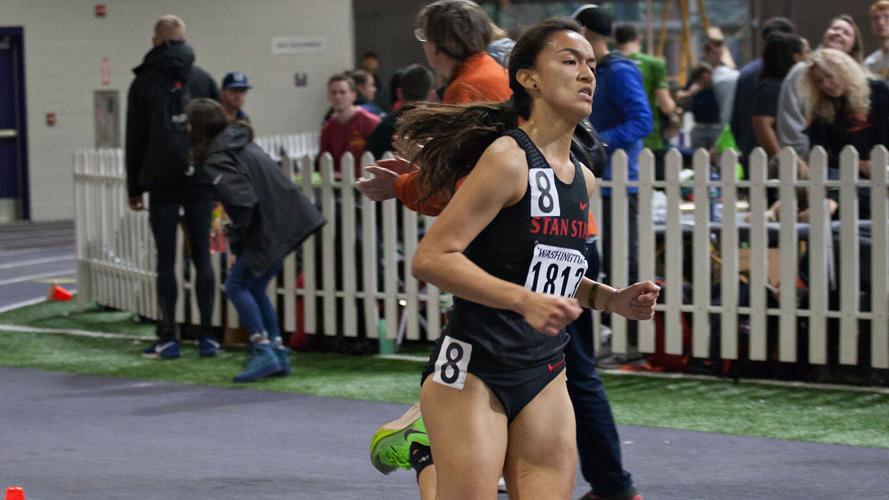 Cynthia Mejia was one of the most dominant runners at Stan State during her time at Stan State. (Photo courtesy of Stanislaus State Athletics) 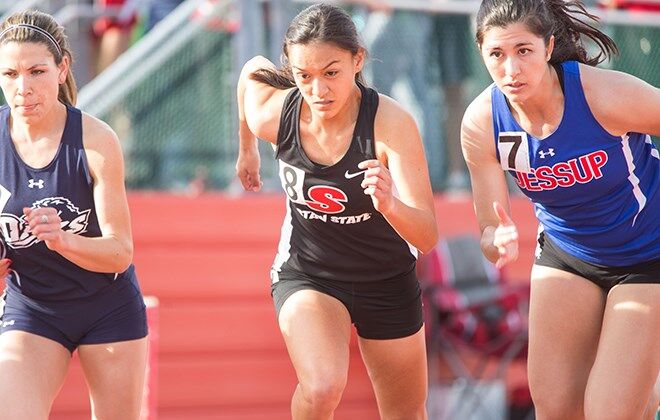 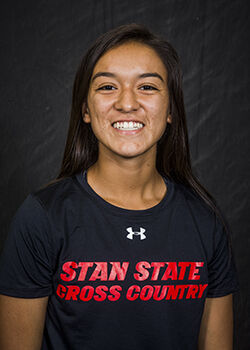 Mejia explained that she was overwhelmed with excitement and was honored upon hearing of her nomination.

“I had many other fellow women student-athletes that just as easily could have been nominated. so the fact that the department thought of me was really heartwarming,” Mejia said. “It made me feel like everything I had done at Stan State and the journey I went through as an individual did not go unnoticed and that I made a difference at the university for the better.”

Mejia, a four-year Dean’s List member and Presidential Scholar-Athlete who graduated with a 3.46 GPA from Stan State in 2020 as a Business Administration major and Communication Studies minor, was one of the most dominant runners during her four years at Stan State.

In 2019, Mejia posted the 12th fastest time in the country in the 5,000-meter. In 2020, she earned All-American honors in the 3,000-meter and 5,000-meter races during the indoor track & field season. She qualified for nationals in both events and was a favorite heading into the championships the COVID-19 pandemic cut the season short.

Mejia even had her fair share of record-breaking performances as a Warrior. Her 4:55.39 mile time at the 2020 Seattle Pacific Final Qualifier and her 35:47.34 10K time at the 2020 Kim Duyst Invitational were both Stanislaus State school records that still stand to this day.

In February of 2020, Mejia had the opportunity to play a part in coordinating Stan State’s first-ever National Girls and Women in Sports Day event.

“I was able to help the marketing team in the athletic department reach out to local elementary schools and get kids involved in the event day,” Mejia explained. “I had a lot of fun helping out and it was a very rewarding experience at the end of it all.”

Mejia also volunteered with the track and field team for the Kayla Bee Positive Fun Run 5K during her freshman year in 2016 and had the honor of attending one of the committee meetings alongside Kim Duyst.

“It was very moving to hear the story behind the Kayla Bee run and made me realize that sport goes beyond competition; it brings communities together,” said Mejia.

“Playing sports teaches life lessons that will carry on with you throughout your entire life. It teaches you discipline, respect for others, how to set goals, grittiness, and my favorite, how to fail or have a rough day while still knowing how to get up and do it again the next morning,” Mejia added. “No matter what was going on in my day, I knew that when I went on a run, that’s all that I had to focus on, nothing else mattered.”

The moments Mejia shared with her teammates, coaches and Stan State athletics staff are things she will always treasure.

“One thing that I will miss forever is finding myself running on the canal on Taylor Road at 6 a.m. with the sun coming up and 10 of my teammates half asleep next to me. I will never forget the feeling of togetherness and being in that moment with them.”

Mejia’s journey in the world of athletics is far from over. She is currently living in Los Angeles and is enrolled in the Masters of Sport Management Program at University of San Francisco through the institution’s Orange County campus. She is also balancing three sports internships with UCLA and the Los Angeles Rams.

“I am a volunteer intern for UCLA’s Then, Now, Forever Football alumni tent on game days at the Rose Bowl. I love working with UCLA staff and learning about what it takes to put on a Power 5 football game. I’m also an intern with the Los Angeles Rams where I get to troubleshoot mobile ticketing issues and help customers find their way around the brand new SoFi Stadium. My third internship is an Academic Mentor in UCLA Athletics Academic and Student Services Department where I get to work one on one with a group of student athletes at UCLA and mentor them to be successful both academically and athletically,” said Mejia.

Mejia explained that one of the biggest reasons she wanted to go into Academic and Student Services at the collegiate level was because of the impact Stan State’s Alissa Aragon had on her. Aragon is the former athletics academic advisor and is the current assistant athletics director and senior woman administrator. She was also the first person to notify Mejia that she was a CCAA nominee for Woman of the Year.

“Alissa was my mentor and saw my journey from when I came to Stan at 17, to when I graduated at 22. She’s one of the biggest reasons I want to go into Academic and Student Services at the collegiate level because I’ve seen the impact that administrators can do in that area of athletics,” Mejia said. “Alissa and I still talk to this day and I’m constantly sending her updates about internships and classes I am taking at the graduate level.”

Aragon was also joyous upon hearing of Mejia’s nomination.

“I was not shocked that Cynthia was chosen as a finalist. She really embodies leadership, teamwork, academics, and service which is what this award is all about. I am so very proud to have Cynthia represent Warrior Athletics at Stan State and the CCAA,” Aragon said. “I have watched Cynthia develop into a confident leader for her teammates and mentor to her fellow classmates. To have been even a small part of her journey has been my privilege. She left a positive impression on myself, the Athletics department, the campus and our record books.”

The NCAA Woman of the Year was created in 1991. Every year, all collegiate schools from each of the three NCAA divisions nominate a female student-athlete from their program for the award. The athletic conferences in which the nominees compete in then review the nominations and select two to represent their conference.

“Representation matters, which is why honoring the success of female student-athletes and highlighting their accomplishments in the classroom, in their sport, and in their community is so important,” Aragon said. “It is also important to amplify women’s accomplishments in athletics because participation in athletics builds confidence, leadership, strength and resilience – they are role models for future female student-athletes.”

For more additional news and information on the NCAA Woman of the Year and to view lists of past winners and nominees, head to https://www.ncaa.org/ncaa-woman-of-the-year.