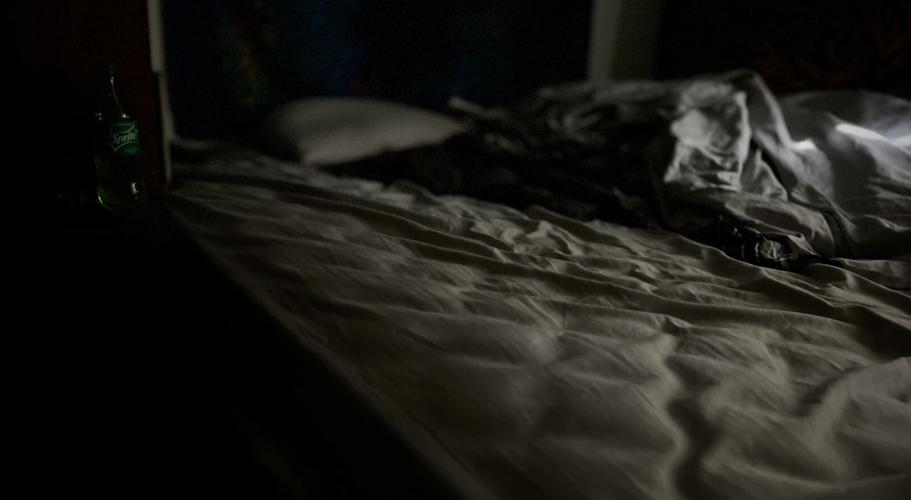 “Are you ok?,” I’m asked from the bathroom door. I say I’m fine, but I’m clutching my chest dreading the next round of toxic yellow bile making its way up my esophagus.

“Ok, let me know if you need anything,” says my mom before walking away, I hear her shoes echo down the hallway as she walks away. I flush the toilet, brush my teeth trying to erase the taste that’s painted in my mouth, and curl back in bed for what felt like the hundredth time since I closed my eyes the night before.

It was October 5 and in-person instruction at Stan State had just returned. "Fantastic," I thought as I lay there trying to get my eyes to stay closed, "I’m definitely going to miss class today and probably tomorrow as well."

I toss and turn trying to sleep, but my mind is racing like the Daytona 500 around all the things I needed to do that day and the following days. I just couldn’t afford to be sick during the semester.

A year ago, I would have worried about being sick with Covid, it would have been my first thought. Since being vaccinated, that anxiety has dissipated quite a bit. I still worry about getting sick, but for different reasons now.

Testing positive for Covid-19 has a whole new mess of troubles these days. Testing positive means losing tips at the restaurant where I work, which just got its regular customer base back, not being able to go to class discussions on campus and the worst of all, isolating myself for two weeks. All these thoughts came rushing in at once as I laid there trying to regain the sleep that was stolen the night before.

I immediately scrambled for my phone, googling “Covid symptoms.” Honestly, I already knew that nausea, vomiting and diarrhea were on the list, but my eyes scanned their way down that list provided by the CDC hoping they had been removed. They were still there, the last two on the list. I would have thrown my phone against the wall if the stupid thing didn’t cost as much as a beater car off Craigslist.

It was time to deal with this. I sipped some Sprite and worked up the courage to get out of bed and at least take my temperature. I aimed the contactless thermometer I had bought in the begging of Covid at my forehead and let the laser do whatever it does. 98.3 it read blinking at me. Good, I thought only a few measly points above 97.7, my usual temperature.

Ok, now for the real test the taste test. I didn’t know a single person who had been sick with Covid that could still taste and smell properly. Nevertheless, my scrambled eggs tasted like eggs, coffee smelled like coffee, and toast still tasted how it should. My mind was at ease, so I set alarms for 30 minutes before my classes and attempted to save the day by going back to sleep. That didn’t happen either.

Alarms went off and I reached for my phone to send messages through Canvas saying, “I won’t be in class today, I have caught a stomach bug. I plan to return to class on Thursday.” My Tuesday was over.

The next day, the light came through the space my curtains didn’t occupy, and I sat up from bed feeling empty, but much better. I immediately logged onto my computer and started trying to make up for lost time. I ate some breakfast and sighed with relief an hour later when nothing made a come-back on me.

By Thursday, I felt completely restored. I was scrambling to make up the time I lost sleeping instead of reading and doing class assignments, but I was back to normal.

At this time, the thought began to arise that I should get tested before going back to campus. I didn’t want to if I’m being honest, as a positive test could send me into isolation once more. I ignored those festering thoughts for the morning, but by lunch I was asking my friends, family and professors what they thought I should do. I didn’t hear what I had hoped to hear and I was nervous to lose the freedom I felt like I had just gained. The next morning, I went to get tested at Stanislaus State free testing site.

I woke up, my stomach uneasy the way it is before taking a final that will either make or break my grade, grabbed my keys and went down to the campus. I had multiple Covid scares in the begging of Covid and wasn’t thrilled I'd have to wait for results again.

This was my first time getting tested at this site and had no idea what to do, so I pulled into the parking lot and made my way through a {thankfully} empty line, until I was stopped by a sign. It was at this moment that I realized I hadn’t even checked to see if there was anything I was supposed to do before just showing up.

I had felt a bit foolish, but thankfully all was not lost. I parked my car trying to rush through the steps that had to be completed on my phone. At this time, I started becoming anxious. What if someone pulls up behind me and they are prepared? I’m just in the way and I better move, I thought. I decided to pull into an available space until I finished the questionnaire, and just in time as two cars were entering the line behind me.

As I sat in an empty parking space, the cars behind me also stopped at the sign. I imagine that they also scrambled to complete the steps necessary to get tested.  I was slightly disappointed when they pulled up to the line at the pop-up tent where the testing was being done.

It was at this moment that I noticed one of the testers walking up to my car. I frantically searched for a mask and rolled my window down. “Don’t park there,” she said, “It will confuse the other people getting tested.” I apologized and said I hadn’t completed the form yet. “Don’t worry you can finish it in line, we will come to your window when you’re ready," she responded.

I sat there feeling a little bit silly that I had jammed up their operation, but she reassured me that it was ok and that it happened all the time. I took my place back in line of the cars and killed the engine as she had requested. I stuck the swab up each nostril until my eyes filled with tears and waited for her to tell me I could switch sides. All in all, the process maybe took half an hour to complete and was relatively painless, minus the slight embarrassment of not being prepared.

I returned home and began to work on the assignments I had neglected while my stomach bug worked its course. The next morning, I got a text message stating that I was Covid free. I breathed a sigh of relief and started to text all the people I had asked about getting tested.

The following week, I set foot on campus for the first time as a Stan State student. Two years ago, I wouldn’t have believed it if you told me that I would miss hunting for free parking spots or speed walking around trying to find a building I had only heard of and not seen. For the first time since I transferred to Stan State in 2020, I felt like a real college student again. The only difference was that I wore a mask that constantly fogged up my glasses, and held my phone, the screen green like a compass out in front of me ready to be shown to anyone that asked, a price Im willing to pay if it means taking steps towards repopulation.

I enjoy the outdoors, great food, and a good book. I am an editor at the Signal in my final semester at CSU Stanislaus.