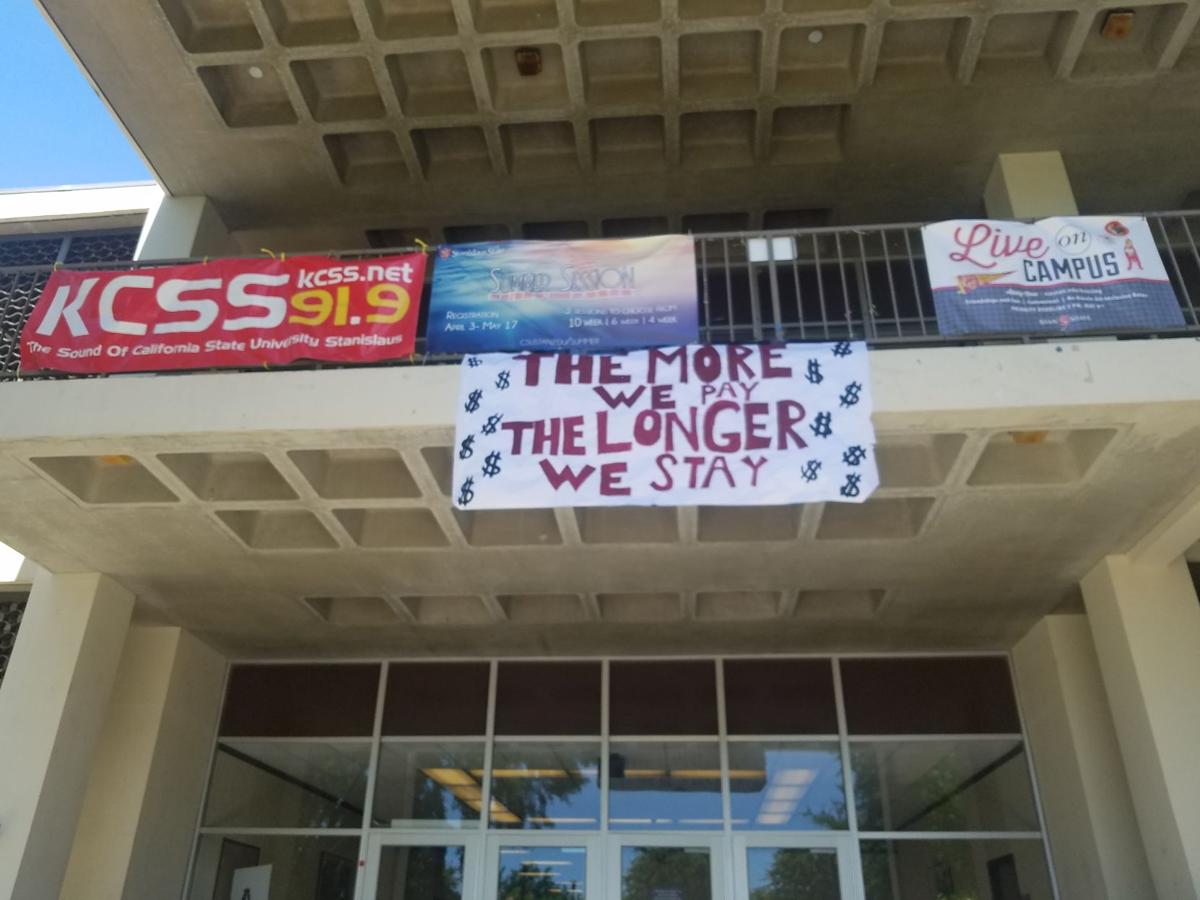 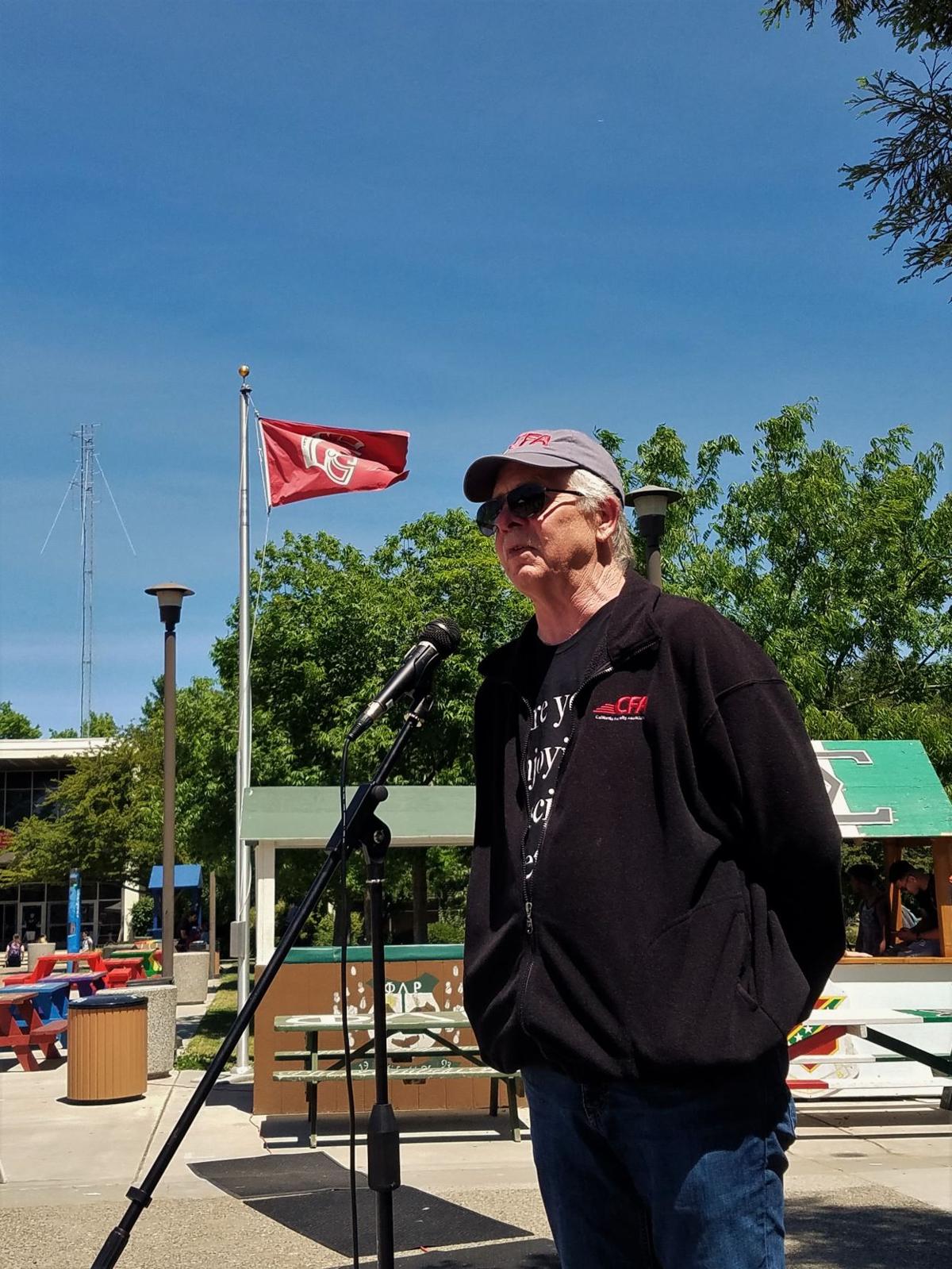 Jon Grammatico, who is a student of Master’s in Social Work and the SQE lead intern, approached the microphone and stated that the tuition increase would affect undergraduate, graduate and credential students.

“$270 is how much tuition is going to go up for undergrads, $312 for credential students and $438 for graduate students,” Grammatico stated.

As a graduate student, Gramatico expressed that $438 is more than he pays in books in a semester and rent,

He continued to speak on his experience as a freshman after he ran out of financial aid.

“It was winter break…I remember looking at my bank account and seeing five dollars left to my name. If tuition had gone up $270 I wouldn’t have had those five dollars in my account,” Gramatico said.

Many other SQE members approached the stage to speak about how the tuition increase will affect them as well as other students at the Stan State campus.

“I cannot imagine having the burden of being undocumented, having to pay more per semester and on top of that having a white supremacist  on campus,”  SQE member Yevett Shopp (senior, Communication Studies) said.

She expressed that she already feels unsafe as a person of color, however, she further stated that she couldn’t imagine what it would be like to have to worry about other things as well.

Moreover, another student, Andrew Isa (junior, Kinesiology) was given a chance to approach the microphone to express how he felt about creating a free university system.

“Pay attention to things around you… If you watch the news they [ask] you how can you afford to pay for free tuition? They always tell you that we will have to increase taxes, but they [will] never give a reason [as to how] we can afford to pay for a war?,” Isa said.

“The Iraq war, the Afghanistan war ant the bombings of Syria, Pakistan and Yemen. They never ask how we can afford that,” Isa expressed. “We are in trillions of dollars in debt because of that.”

He expressed his frustration with the argument against free tuition by saying comparing the investment value of sending people to war versus providing a free education.

“Creating free tuition systems is not going to be cheap, but what’s a better investment? Wars and the destruction of people’s homes, [creating] death and poverty? Or is it investing on our youth and the people who are looking to better themselves to reach their potential?,” Isa expressed.

Dr. Steven Filling, President of the California Faculty Association (CFA) Stan State Chapter, was present for the rally.When he spoke he made a point that the CFA donated $35,000 to the Warrior food pantry and to an emergency loan fund for students.

“We didn’t do that because students are so well off that they can afford to pay the state more money, we did it because out students need money,” Dr. Filling said. “The notion that the state should look to you for money is silly, when you are looking for money you look at places that it is, not in our student’s pockets.”

He encouraged students to support Assembly bills AB21, and AB393 by signing the petition present at the rally.

AB21 which is currently sitting in the committee, seeks to mitigate the impacts of potential federal changes to immigration enforcement policies, including Deferred Action for Childhood Arrivals (DACA) program.

While AB393 requires that tuition and mandatory systemwide fees for CSU students, and enrollment fees charged to CA community college students may not be increased from the amounts charge as of  Dec. 31.

Dr. Filling emphasized AB393, that will put a freeze on the California State University Board of Trustees decision to raise fees.

“Our undocumented students deserve every damn right to as much bit of education as the rest of us.” Dr. Filling said regarding AB21.

Wonuola Olagunju (sophomore, Biology) feels that Immigration and Customs Enforcement (ICE) agents do not need to be a presence on college campuses.

“They do not need to be on campus disturbing students just trying to learn and better themselves,” Olagunju said. “Having [I.C.E] on campus is not going to help the situation… Students deserve to have a sanctuary where they can feel safe and learn.”