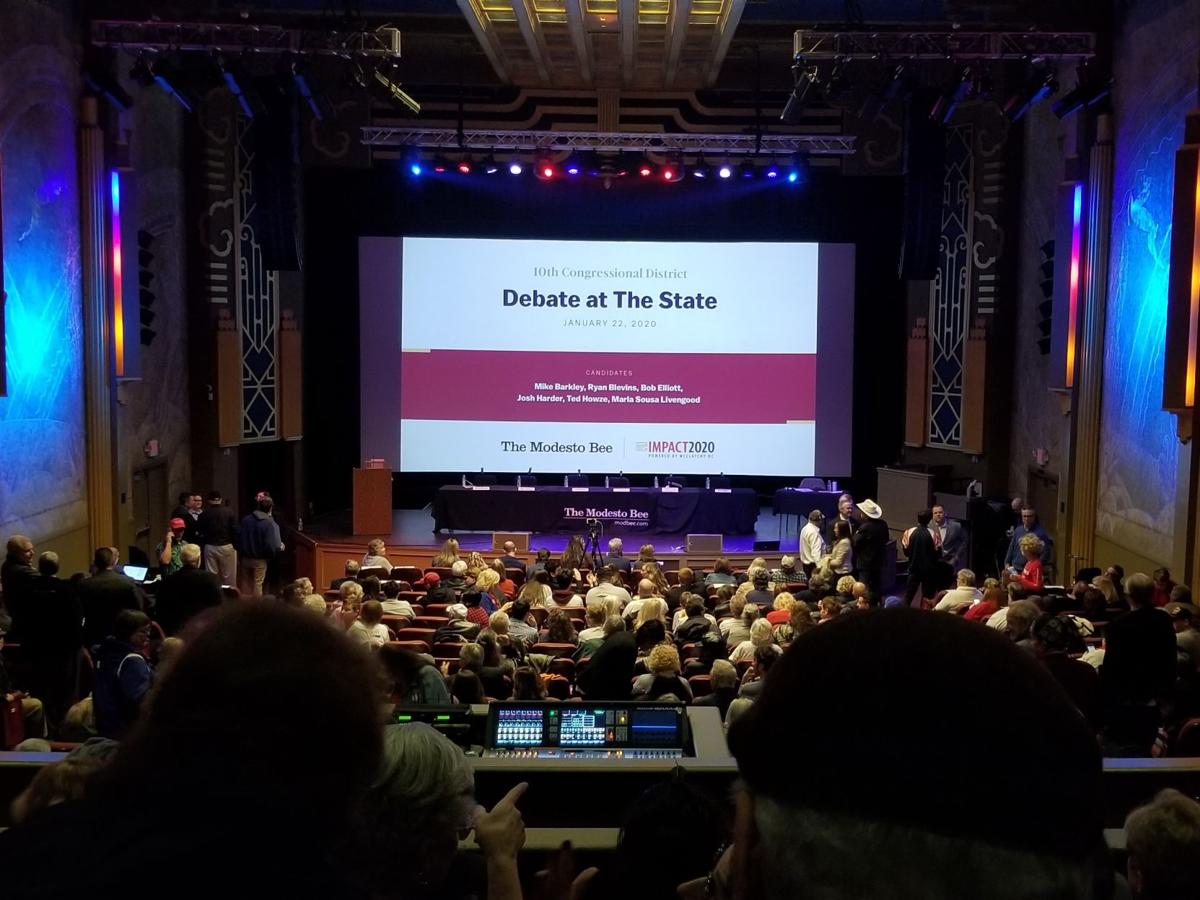 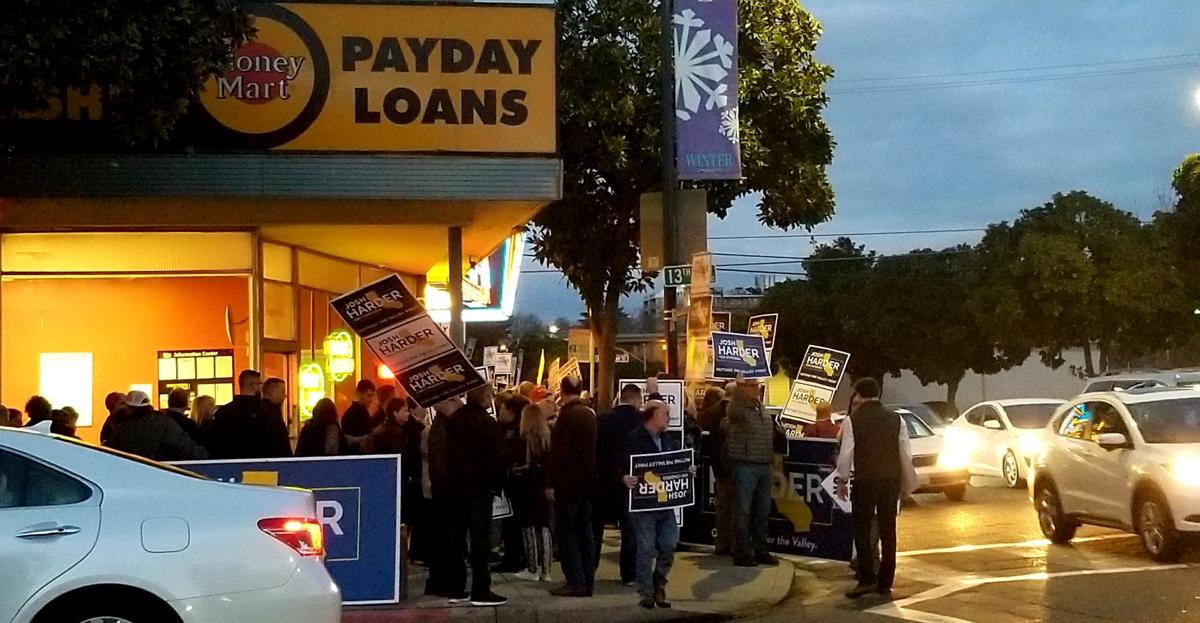 Demonstrators for several candidates arrived to the State Theatre hours prior to the start time of the debate. (Signal Photo/Christopher Correa) 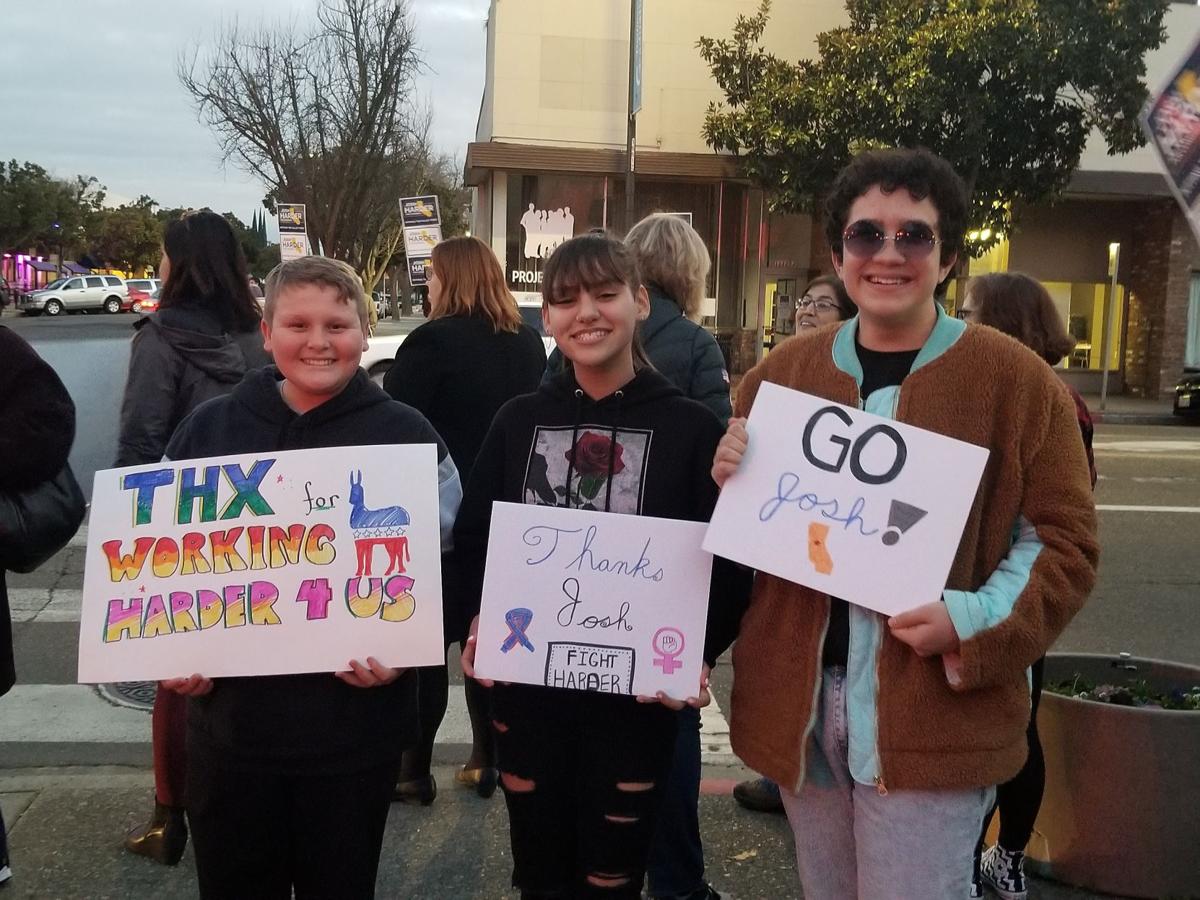 Cameron Nycum (left), Mikayla Ruiz (middle), and Micah Littlepage (right) of Pitman High School were one of many who showed up to the State Theatre to show their support for candidate incumbent Josh Harder. (Signal Photo/Christopher Correa) 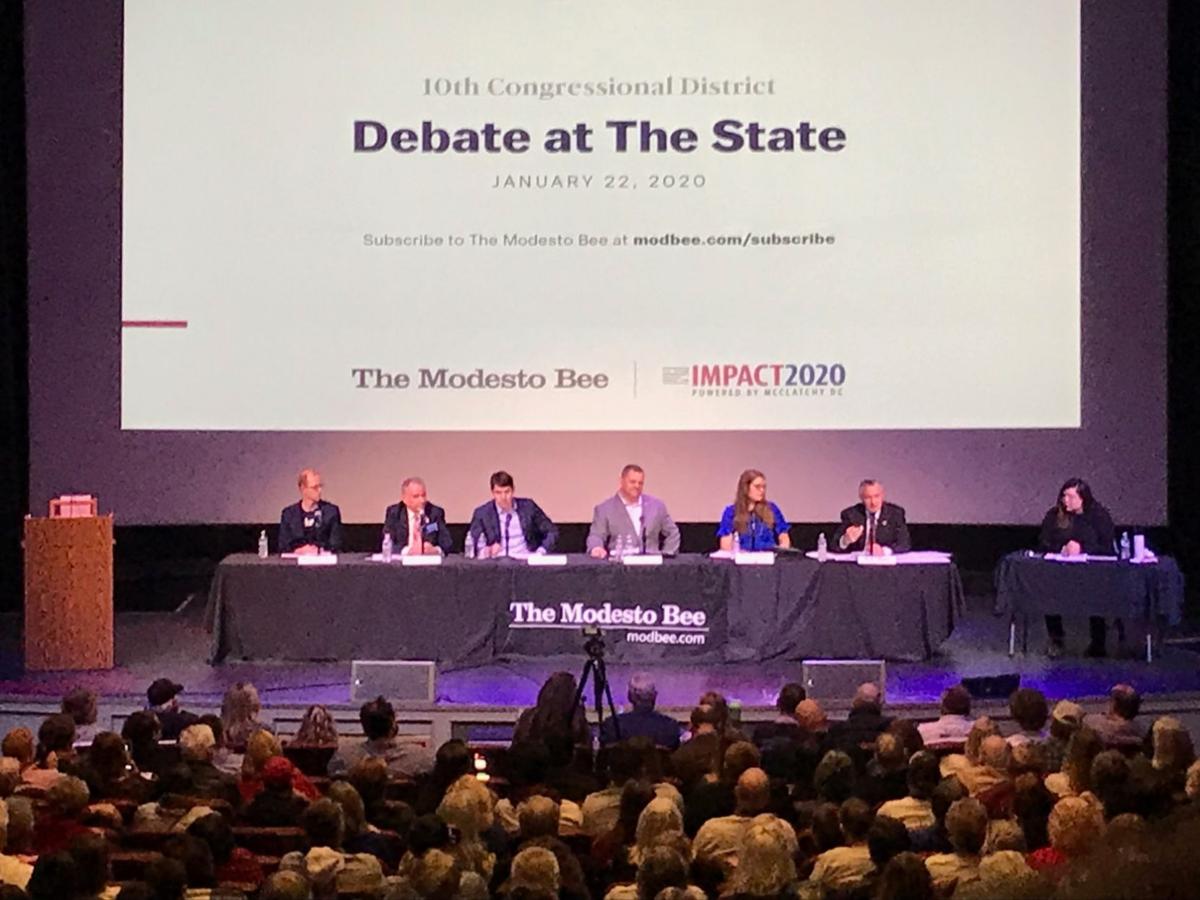 The Modesto Bee hosted a debate between all candidates running for California’s 10th Congressional District seat on Wednesday night at the State Theatre in downtown Modesto.

This debate was open to the public and gave all six candidates the opportunity to answer questions from the audience, which were submitted beforehand. The six candidates are incumbent Josh Harder (D), Ted Howze (R), Mike Barkley (D), Bob Elliott (R), Ryan Blevins (D) and Marla Sousa Livengood (R).

Stanislaus County, home of Stanislaus State, is a part of California’s current 10th congressional district. According to the institution’s enrollment demographics, almost 50 percent of those currently enrolled at Stan State are from Stanislaus County.

Turnout for the event was overwhelming as the theatre’s 550 seat capacity was filled, with many attendees arriving outside the venue several hours early to demonstrate. The audience was clearly politically split between the left and the right, which created a tense and emotional environment throughout the evening.

It was also noticeable that the vast majority of the crowd were primarily of an older demographic. Nevertheless, there was a young presence in the room.

Micah Littlepage of Pitman High School’s Young Democrats club was one attendee who represented a younger generation at the event. He and some of his classmates were among those who arrived early to show their support for their candidate of choice. He explained that his advisor encouraged the group to attend and be more involved in local politics. “We are so lucky to live in our democracy, and any chance we get, we should embrace that,” Littlepage explained. “Young people need to realize that it’s not only about the presidency, it’s about every level,” he continued.

Littlepage also voiced his opinion on those who choose to not vote, but go on to criticize the government. “If you’re able to vote and you don’t vote, I don’t want to hear anything from you,” he said.

The audience was clearly passionate about the topics that were being discussed on stage, as many voiced their opinions by shouting, cheering, booing, and even cursing in the middle of candidate statements. These interruptions led to several, short delays. Some of the many topics that were discussed included DACA and the Dream Act, student employment and gun control.

The question of whether candidates were supportive of DACA and Dreamers was submitted by the Signal, and each candidate had similar stances on the issue.

All six candidates agreed that DACA should be reinstated and that Dreamers should have protection and be given visas, but disagreements arose when discussing why there has been no solution to this issue.

The three Democratic candidates all said that they are in support of those who were brought to the United States by their parents or guardians at a young age, but Livengood claimed that those in office have not taken any real action to help solve the problem. This prompted a response from Harder, saying that he has backed up his support for Dreamers by actually voting for the Dream Act.

Elliott took the criticism of those who have held office a bit further, citing President Trump’s most recent efforts to work with Democrats. “President Trump, some time ago, offered to make a deal with democrats in congress,” Elliott said. “He offered to solve the DACA problem if they would give him the money he requested for the wall, and they refused.”

Elliott’s mention of the southern border wall was met with significant opposition from the audience.

Barkley made the point that we need to recognize the difference between immigrants and refugees. “[We need to] start treating refugees with the respect that they deserve and allowing them into our country and stop tormenting these people.”

Many students struggle with finding employment after graduation. The question of how to improve job security for the younger population of the 10th District was also submitted by the Signal.

Once again, all candidates agreed that they want to bring more jobs to the valley and that we should invest more into our education system, but there were some drastically different ideas presented by Blevins, Barkley and Harder on how that could be accomplished.

Blevins, who is a robotics engineer, has made technology a major point of focus in his campaign. He said that with his familiarity with in Silicon Valley, he can help create jobs. “I have heard from businesses in Silicon Valley that don’t move jobs to the valley because they do not believe that we have the necessary education,” Blevins claimed. “They want to be near these very successful UC and CS colleges, so if we expand enrollment in our colleges, we will get more jobs to the valley,” he continued.

Barkley responded to the question by making a proposal that Stanislaus needs to add a full size engineering school, as there is a growing demand for engineers.

Harder answered the question by stating that there are already good businesses here in the valley. He explained that we should work on expanding those businesses and that he already has a plan to accomplish that. “One of the bills that I put forward would make sure that we are creating more partnerships between companies like Gallo Wine and Foster Farms to work directly with community colleges and high schools to train folks in the skills that they need.”

Harder also stressed the importance of investing in all types of education. He explained how we need to make the same federal scholarships that are available to four years available to short term programs, as well.

A question regarding gun control in our country was one of the more animated and emotional topics that was discussed during the debate.

All three Republican candidates showed their support for the Second Amendment, but opinions towards who should be able to have guns varied.

Elliott cited his 30 year military service and his lifelong National Rifle Association (NRA) membership as to why he believes that guns can be beneficial and why he is a strong supporter of the second amendment. Elliott added that, although he supports the amendment, he finds background checks necessary and that the country should take the necessary measures to make sure guns don’t end up in the wrong hands.

Howze voiced his support for the Second Amendment very clearly. For the most part, the crowd heard him out, until he began using recent tragic events (including gun violence in schools) as an example as to why our country should have more guns.

Livengood had similar views to Howze. She explained that her three children participate in active shooter drills at their schools, and that she feels that what they are doing is not enough to protect them. She believes that more guns should be available so that people can better protect themselves in times of need. Her statement drew several negative comments from the crowd, including one young man in the upper rows of the theatre yelling, “I don’t want my teacher to have a gun!”

Harder decided to stay on the subject of children and school safety when discussing guns. After meeting with students during his campaign, Harder said that he finds it “incredible” that there are people who still don’t support universal background checks. “We did a town hall earlier this year, and we invited every high school student across the district to rank their concerns. Number one was gun violence,” Harder explained. “I don’t think the number one selling item for back to school should be a bulletproof backpack.”

Blevins also showed his support for the Second Amendment, but agreed that not all people should be allowed to own firearms.

Barkley’s thoughts on gun control was the one that received the most reaction from the lively crowd. He believes that owning a gun should be a privilege in the country and that there should be a full repeal of the Second Amendment.

As Barkley was saying this, his voice was drowned out with opposing yells and boos from the audience. Terms such as “tyrant” and “traitor” were some of the yells that stood out the most clearly.

Barkley responded to the harsh criticism by saying, “It’s most likely going to take 100 years to get done, but eventually we’re going to get tired of all our neighbors getting shot.”

For those interested in hearing what the six candidates had to say about additional topics that were discussed, but not mentioned in this article, a video recording of the entire 90-minute debate can be found here.

Voting for the 10th Congressional District will take place during the primary election on March 3rd. The top two vote-receivers of the March primary, regardless of their party, will move on to the November 3rd general election.