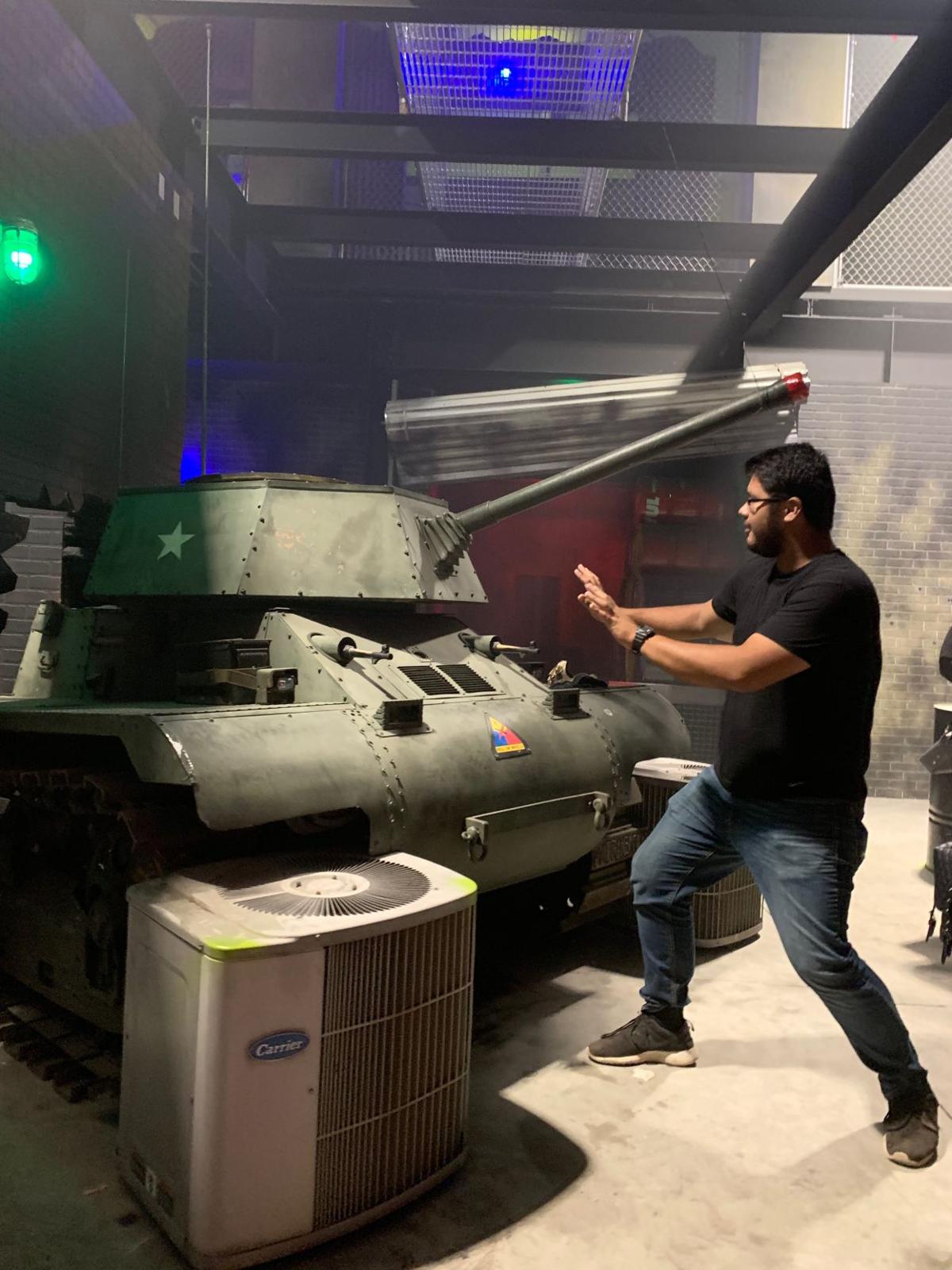 The tank busted through the wall but our editor Juan was ready to stop it mid tracks. 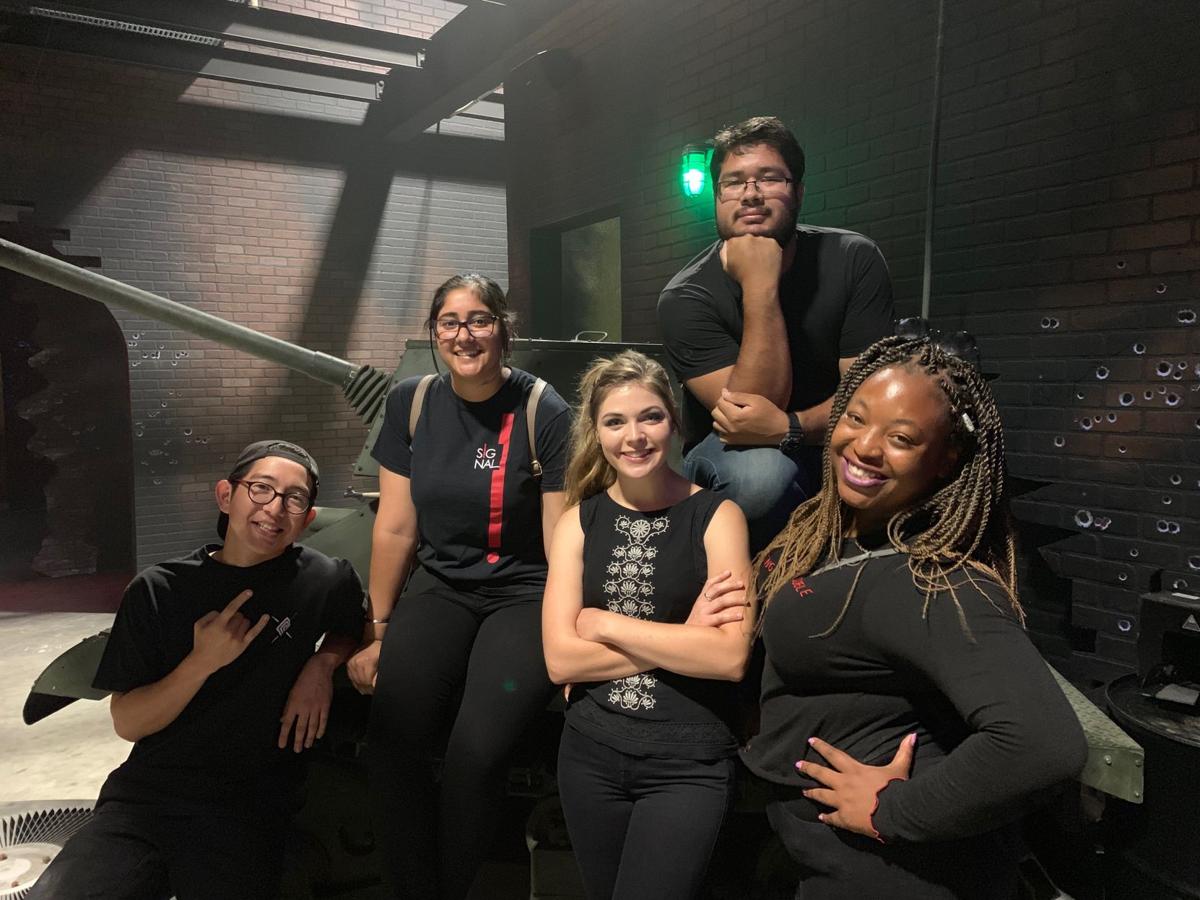 The Signal Crew was out and about the arena showing the Turlock Journal how it's done! 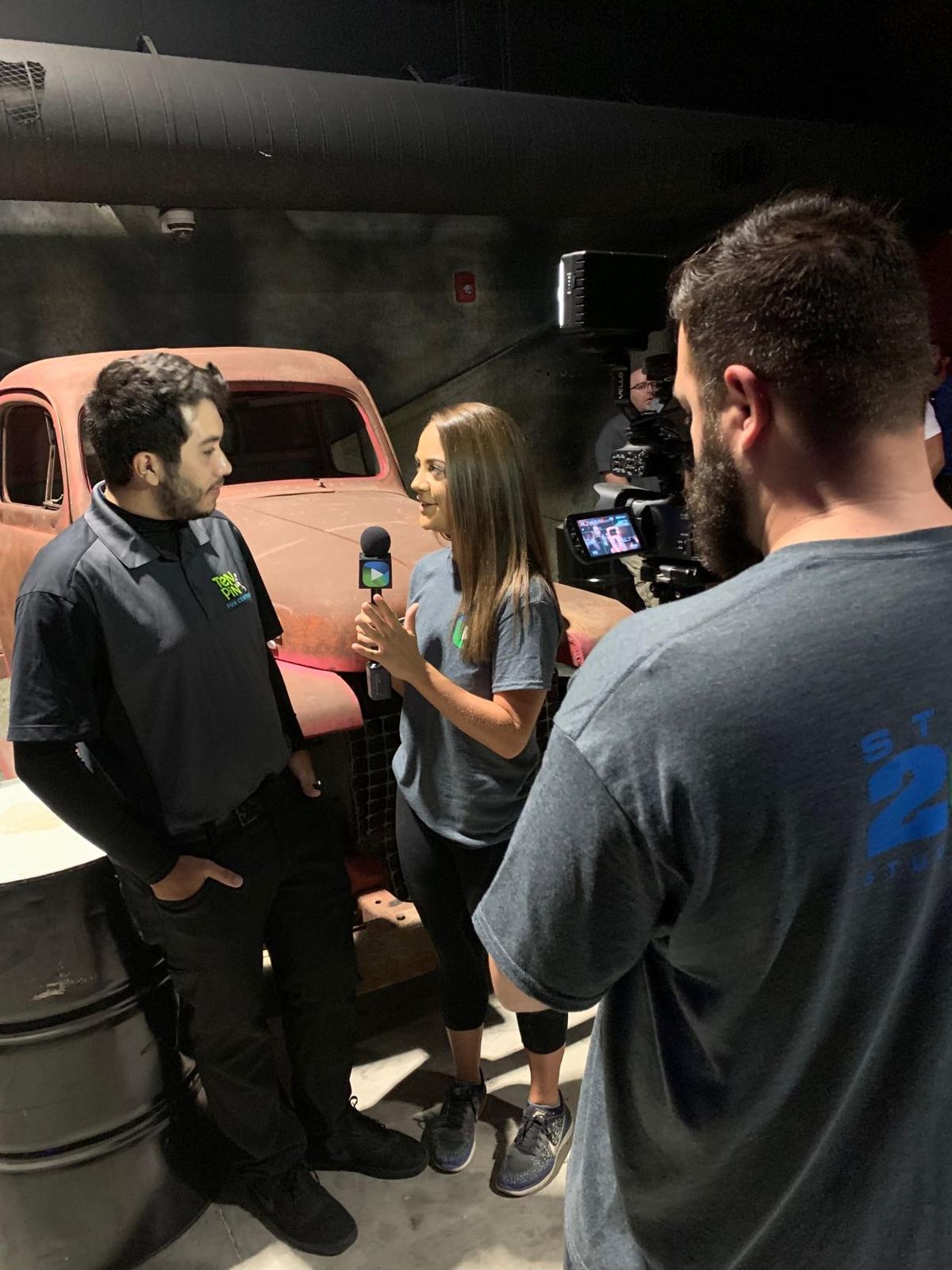 Irizarry getting interviewed by Turlock Journal's very own Angelina Martin.

The Ten Pin Fun Center is Turlock’s most recent and successful additions to the city and now that the fair is all done, the community is searching for something new to do. This is where Ten Pin will come in.

The arena officially opens, the once taped off doors, to the public today Thursday, the 24th, and can be found not far from the main entrance through the arcade.

Ten Pin opened just over two months ago and since then has been drawing in the community with its bowling lanes, multiple bars, and colorful arcade. Since opening, the laser tag sign has been dimmed but today will finally be lit!

Jose Irizarry is a sophomore Music Tech from Stan State and is the brains behind not just the Laser Tag attraction but also the arcade, bowling, and other technical parts of the Fun Center. He says that he started work here about a week ago but since then, he’s learned everything he had to help master this attraction.

Irizarry has a one of a kind job because unlike other laser tag places around here, he is able to completely change the format of the game whenever he likes. He says that “when I go into the computer, I am able to create custom game modes that have different objectives and I’m able to create all different weapons. Some weapons have different recoil levels, different sounds, different accuracy levels...it’s insane the amount of detail I can go into with these weapons.”

Much like a video game, players will soon be able to build up their “character” and see their progress over time playing. Irizarry is excited about this component because “people can come back a week later and still see their progress from last time.”

Another state of the art aspect of this new addition to the Fun Center is that anyone can play at the laser tag. If someone is a laser tag enthusiast or never played before, there are different guns for different levels. For older players, the guns are more realistic because when they’re out of ammo they do have to flip the mag to reload, unlike the gun provided for younger kids. Irizarry says that these are simpler for beginners and that, “these are easier to use because all players have to do is just point and shoot.”

No matter if the player is young or older, they can definitely appreciate not just the layout of the arena but also the time it took to make it perfect. Construction finished not too long ago but with the opening of the arena marks the completion of the $18 million Ten Pin Fun Center.

Nathan Straubinger, Senior Advisor, is optimistic to see the public’s reaction to the opening. He says, “Laser tag will be open during the regular hours Sunday to Thursday from 11 am to 11 pm and also Friday through Saturday from 11 am to 2 am” He went on to say that a game will be $9 Monday to Thursday and then $12 on the weekend starting Friday after 5 pm.

Straubinger was happy to have the public see what they have in store for them. Dead center of the arena is a life-size tank in front of an old pickup that was told to have been found locally. He said that “Daryl Patrias, found it randomly in a junkyard and said he had to have it been in the space.” As of right now, the 10,000-square foot space can house up to 24 players at a time but sadly the truck and tank are off-limits. Irizarry said, “we will be closing off the truck so nobody tries to climb on or hide in it during a game.”

Even though taking away the truck takes away one spot to hide during a match, there are plenty more spots to take a break and reload at. The two-story arena is filled with spots to hide and shoot from both on the first and second floor. There is a metal catwalk that connects both sides of the arena on the second floor, which can be both the perfect spot to sniper off of but also the most targeted zones in the arena.

No matter the gun-type or player’s style, the new laser tag arena at Ten Pin is the perfect location to host parties, meetings, or even tournaments.

Gary Soiseth, Ten Pin’s Public Information Officer, said that in the near future they look forward to hosting tournaments. “We are planning to have ‘Warrior Wednesday’ deals for Stan State students, which is where they can get discounts on games and food. We are hoping to start tournaments and see clubs and teams show up to play, once the semester begins.”

Like the staff at Ten Pin and the Turlock Journal, we are looking forward to the opening of laser tag and will definitely be back for a game or two.