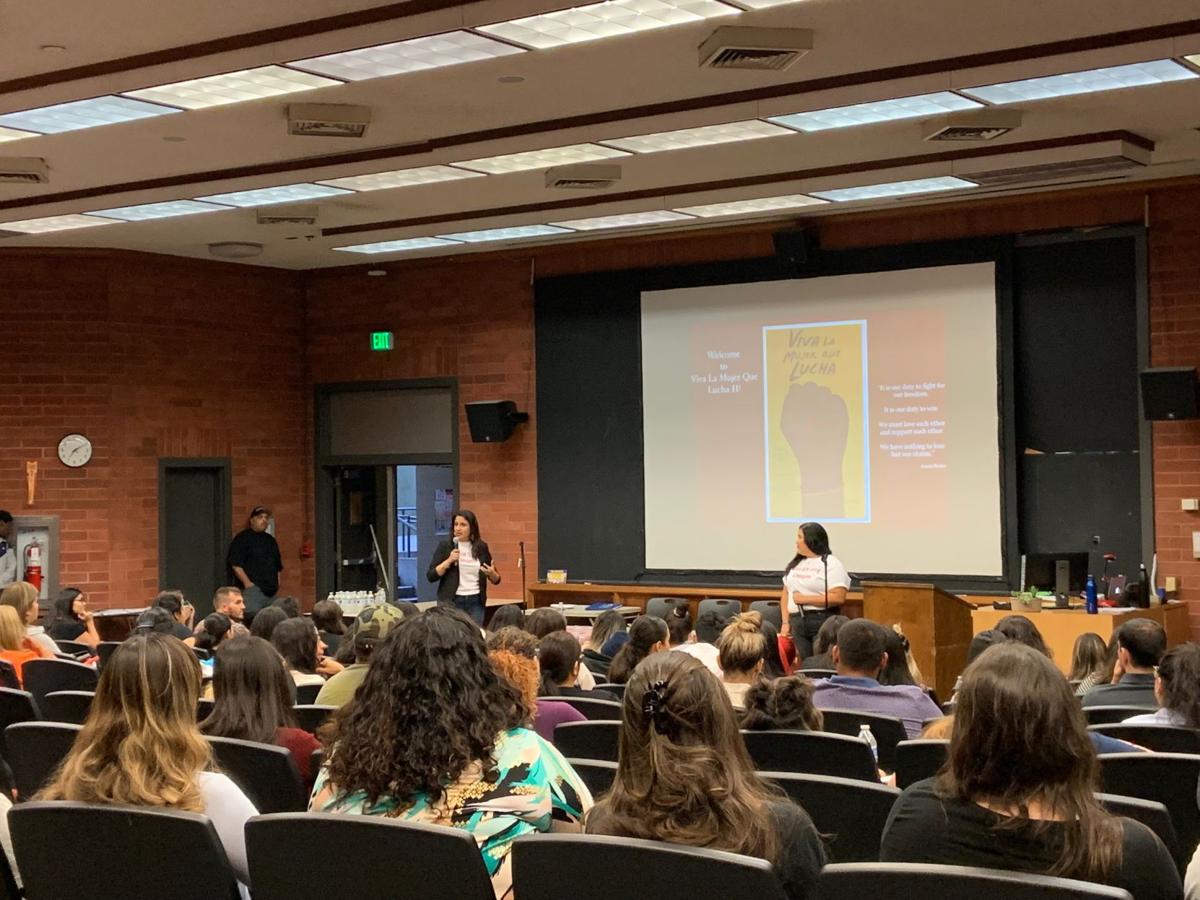 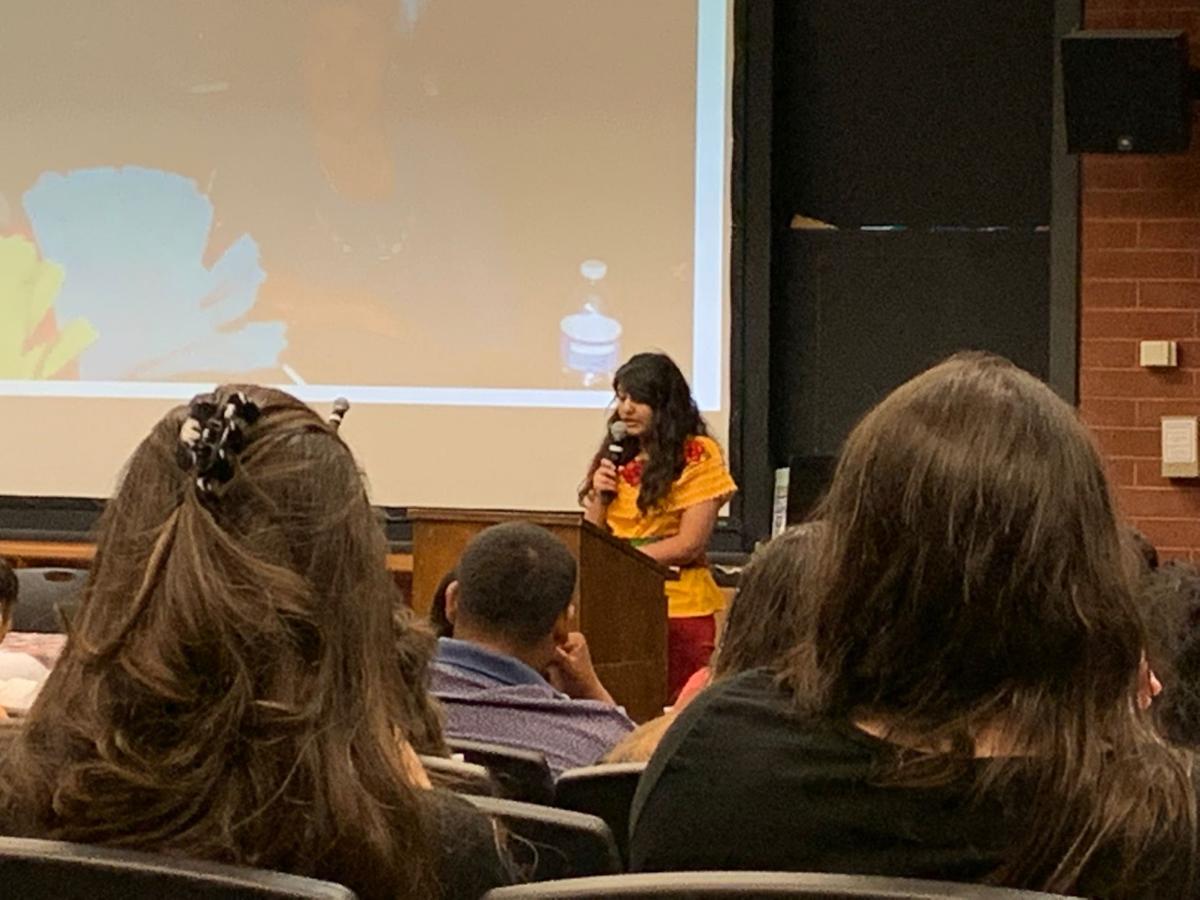 Julissa Ruiz-Ramirez (senior, Political Science, Ethnic Studies) expressing her life story and why she choose to be a student activist. (Signal Photo/Sandra Plascencia-Rodriguez). 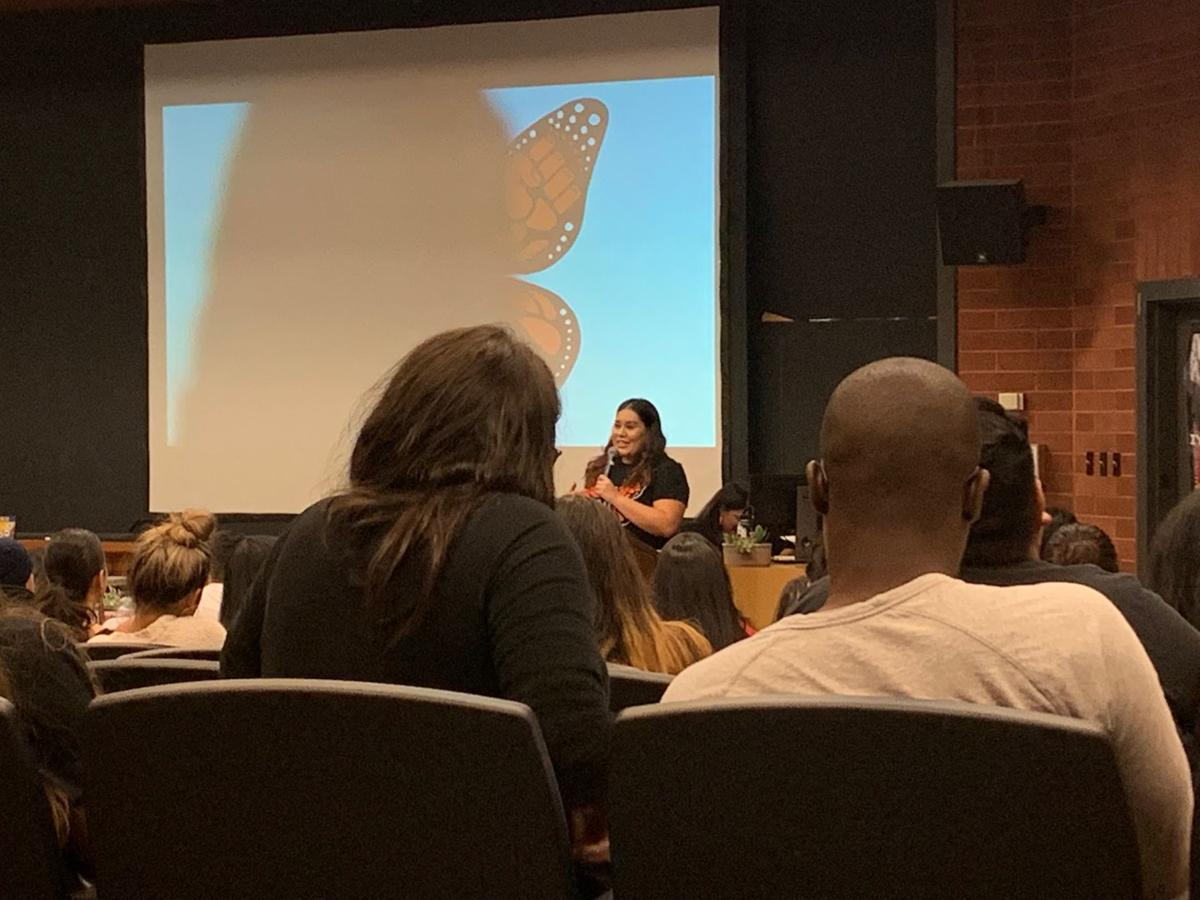 Natalie Perez from Brown Issues explaining why she got involved in Brown Issues and why she brought it back to Modesto. (Signal Photo/Sandra Plascencia-Rodriguez).

Julissa Ruiz-Ramirez (senior, Political Science, Ethnic Studies) expressing her life story and why she choose to be a student activist. (Signal Photo/Sandra Plascencia-Rodriguez).

Natalie Perez from Brown Issues explaining why she got involved in Brown Issues and why she brought it back to Modesto. (Signal Photo/Sandra Plascencia-Rodriguez).

The organizers of the event were Dr. Melanie Berru, a professor of Sociology at MJC, Lorenza Figueroa, who currently works at a Crisis Shelter helping the youth and Naomie Gutierrez, a local activist and future transfer student at Stan State.

The event kicked off with a blessing and acknowledgment of the Indigenous Yokut land occupied by the event.

Dr. Berru and Gutierrez introduced the event, its importance and why it was started.

“In order to learn about our history, we have to take an elective course in college,” said Gutierrez.

They highlighted particularly how the education system neglected their culture until they began college.

“I learned more in 4 months about my cultura [culture] than I did in kindergarten to 12th grade,” said Berru.

The event’s three main focuses were representation, activism, and healing work. It all centered around being in college and keeping activism alive and bringing it back in the Central Valley.

Natalie Perez is a senior at Sacramento State who was born in Modesto and decided to bring her education and activism back to the place she called home. She began a Brown Issues chapter at MJC in which she coordinates and advises.

“I stumbled upon this organization one day, it was called Brown Issues. I loved what they represented. What I saw is what I wish I had when I was younger. It would have been very instrumental in my development, just to see a positive representation of Brown folks. I came up with this crazy idea to bring that back to the Central Valley,” said Perez.

The second speaker was Julissa Ruiz-Ramirez (senior, Political Science, Ethnic Studies). Immensely involved in both the community and campus, she is Co-President of MEChA, a CA Democratic Party Delegate and a community organizer that fights to represent any marginalized groups.

“I would start by joining the local protests that other folks were organizing against Trump, immigration and white supremacy. I quickly realized that those community groups that were already in place were not a space for me. They were typical liberal, white, male-dominated groups and were not representative of my struggle,” said Ruiz-Ramirez.

Seeing protests against white supremacy on Stan State’s campus, led by students is what inspired her to become a student organizer and activist herself.

After a short break, the event continued with a talking table between Natalie and Lorenza Figueroa. Natalie Vargas works at the Havens Women's Center and Figueroa works at a Crisis Shelter in which they focused on the idea of mental health and empathize with the youth they help.

“There is some misconnection because the things I experienced as a teenager shouldn’t be what the teenagers of today experience,” Vargas stated.

Similarly, Figueroa expressed how she relates to the youth because she was in the same steps as them when she was younger. In order to help the youth, they use forms of self-love.

“Activism looks different, and it can be through self-love. As an educator, I have a lot of students who say ‘well I don’t know how to love myself’ and even just talking about that is a form of resistance because we are taught so early on to hate ourselves,” Vargas explained.

“This event signifies that the Central Valley is needing change and now it manifests that. I know the event was put on last year, and this year it was stronger so I hope it continues that way,” said Guadalupe Piceno (junior, Business).

Lurdes Carrillo-Alvarado (junior, Child Development) expressed her concern for the lack of activism in the Central Valley and how she was hopeful to finally see some change.

“I don’t really see activism here in the Central Valley, so knowing there is grassroots and amazing women of color fighting for us gives me hope to possibly see change in the future," said Carillo-Alvarado.

Carrillo-Alvarado is not the only student concerned with a lack of activism in the Central Valley.

“The Central Valley is one of those places that always gets ignored. The only time we are not ignored is when we are being exploited and oppressed. It is a whole new world organizing in big cities than in small cities. Our people are leaving the valley in search of opportunities elsewhere, so what else can I do instead of stay here and fight” said Ruiz-Ramirez.