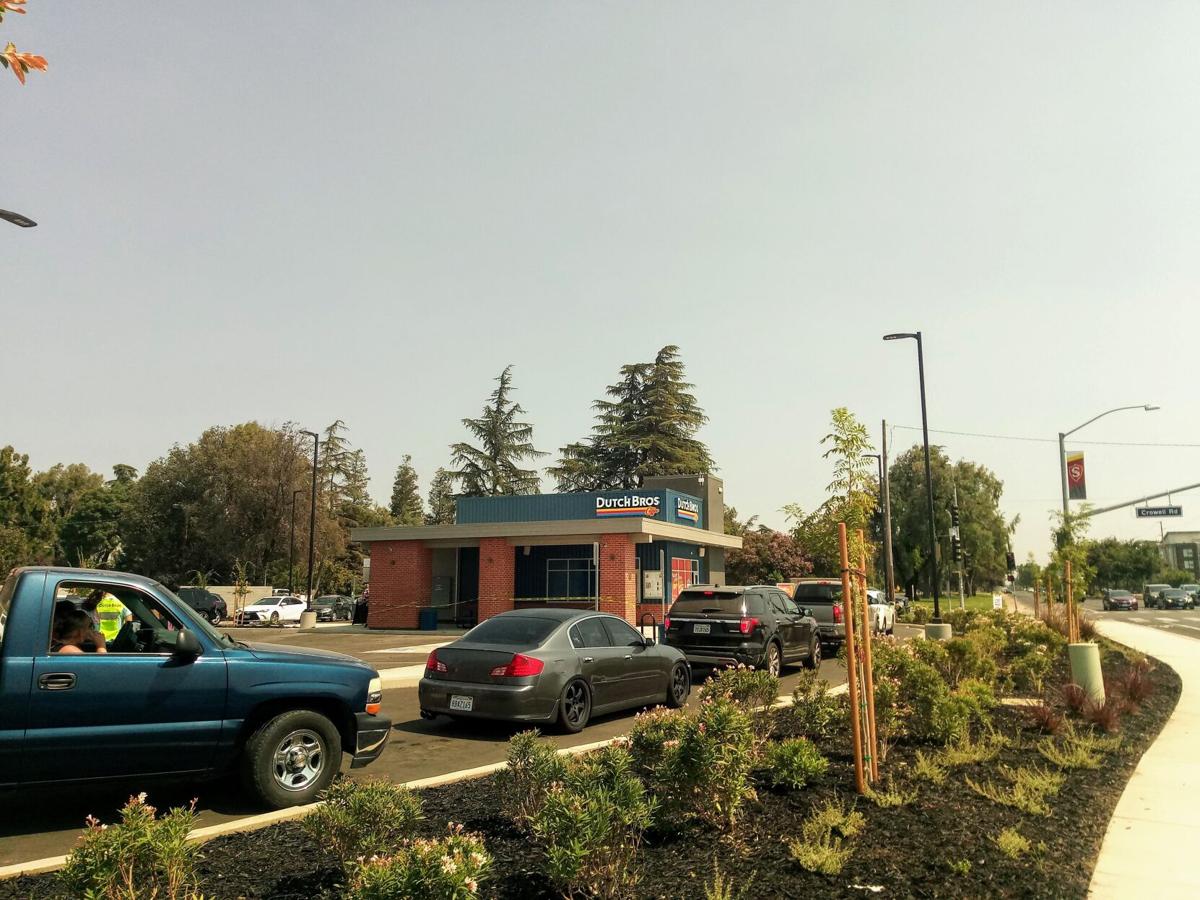 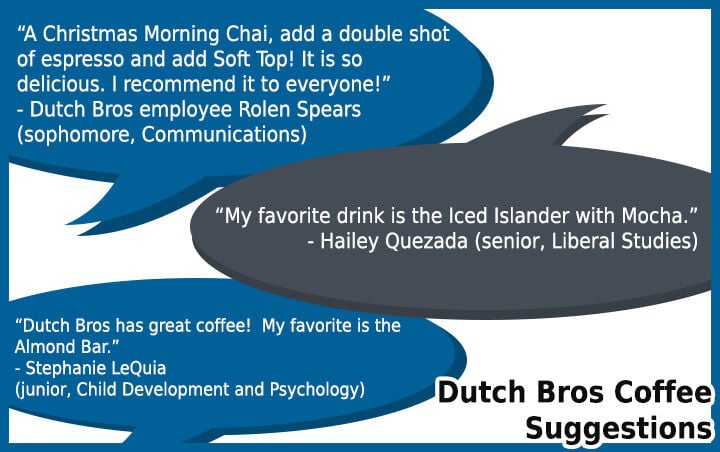 If you're having trouble choosing a drink, try some of these suggestions from Stan students! (Illustration by Ethan Hunt)

New locations of the Oregon-based coffee drive-thru, Dutch Bros, have been spreading rapidly over the past few years; the Central Valley has been no exception to the influence of Dutch Bros.

Just this past week, the new location in Turlock bordering the Stan State campus opened up to the public. The soft opening of the new location on West Monte Vista Avenue was a major success last Wednesday, September 2.

The line wrapped around to the street at many points throughout the day and stretched down Crowell Road, an occurrence that was repeated on the official opening day Friday, September 4 when the line measured nearly half a mile at one point in time. This is quite impressive being that the Stan State campus is not currently teeming with students like it normally would be (in the pre-pandemic glory days).  We can only wonder how long that line to order is going to stretch when everyone is back to in-person learning.

Rolen Spears (sophomore, Communications), a student at Stan State and employee at the Turlock Dutch Bros - who was trained at the Oakdale location - is very optimistic about the success of the new location.  Spears says that “When we’re back to in-person class, it is going to boom! I’m so excited to be able to open up our walk-up window and have fun conversations with students and the community while we make them a drink.”  He adds, “My favorite thing about working for Dutch Bros is how fun it is. I love the atmosphere and the fast-paced energy and serving the customers that come through, especially some familiar faces now that I’m at Turlock.”

One possible concern that has arisen with the installation of Dutch Bros right across from campus is its impact on traffic and parking.  Stan State student Hailey Quezada (senior, Liberal Studies) has expressed her thoughts on the matter, stating that “I don’t think that any Dutch Bros are put in the best location so I think that the traffic will be worse trying to get to Stan.”

However, Quezada does not foresee the parking situation on campus changing much.  Spears affirms that traffic surrounding Stan State will likely be affected, but Dutch Bros is set up to minimize this. "The benefit of a drive-thru coffee shop is that it allows us to serve people faster and be able to share our awesome drinks with the community and students. So, students should expect some increases in traffic around the campus, but likely no difference in parking,” Spears says.

This increase is of little concern to Turlock resident Cheyenne Borba, who lives in the Park Place Apartment Complex neighboring the shop. “All of the streets around the school are always busy, so you get used to having to hunt around for parking. I don’t like the idea of even more traffic in front of where people live but if the drive through is fast enough, it might work!”

Some other factors to be considered with the addition of Dutch Bros are mentioned by Stan State transfer student Allie Kozicki (senior, English): “Having it on campus would be good because it would give more students job opportunities. Also, coffee is literally what students thrive on.  I would go if they had some nice vegan options.”

In answer to Kozicki’s inquiry, Dutch Bros does offer vegan and dairy free options! This is verified on their FAQs page online, linked here: https://www.dutchbros.com/faqs/

Overall, there is a great deal of optimism surrounding the Turlock addition of the popular coffee chain; Dutch Bros is likely to become the newest hot spot amongst students.  Hailey Quezada says that “I think that having a Dutch Bros close to campus will allow future students and current students to be excited for the growth around the campus. I personally got very excited when I heard a Dutch Bros was coming to Turlock, because they are not typically around here. If we go back to in-person learning I will most definitely be going to Dutch Bros at least once a week.”

Spears sums up the unique atmosphere of Dutch Bros, saying, “Dutch is different because we are loud, crazy, and fun. I still love the calm and laid-back aesthetic of other coffee shops, but I love the difference we bring by being so out there and loud.”

Whether you are making do with a homemade coffee from your kitchen and craving a richer kind of espresso, or living on campus and desperate for a new beverage place to check out, be sure to stop by the new Dutch Bros when you can! Take a look at their vast online menu, linked below.