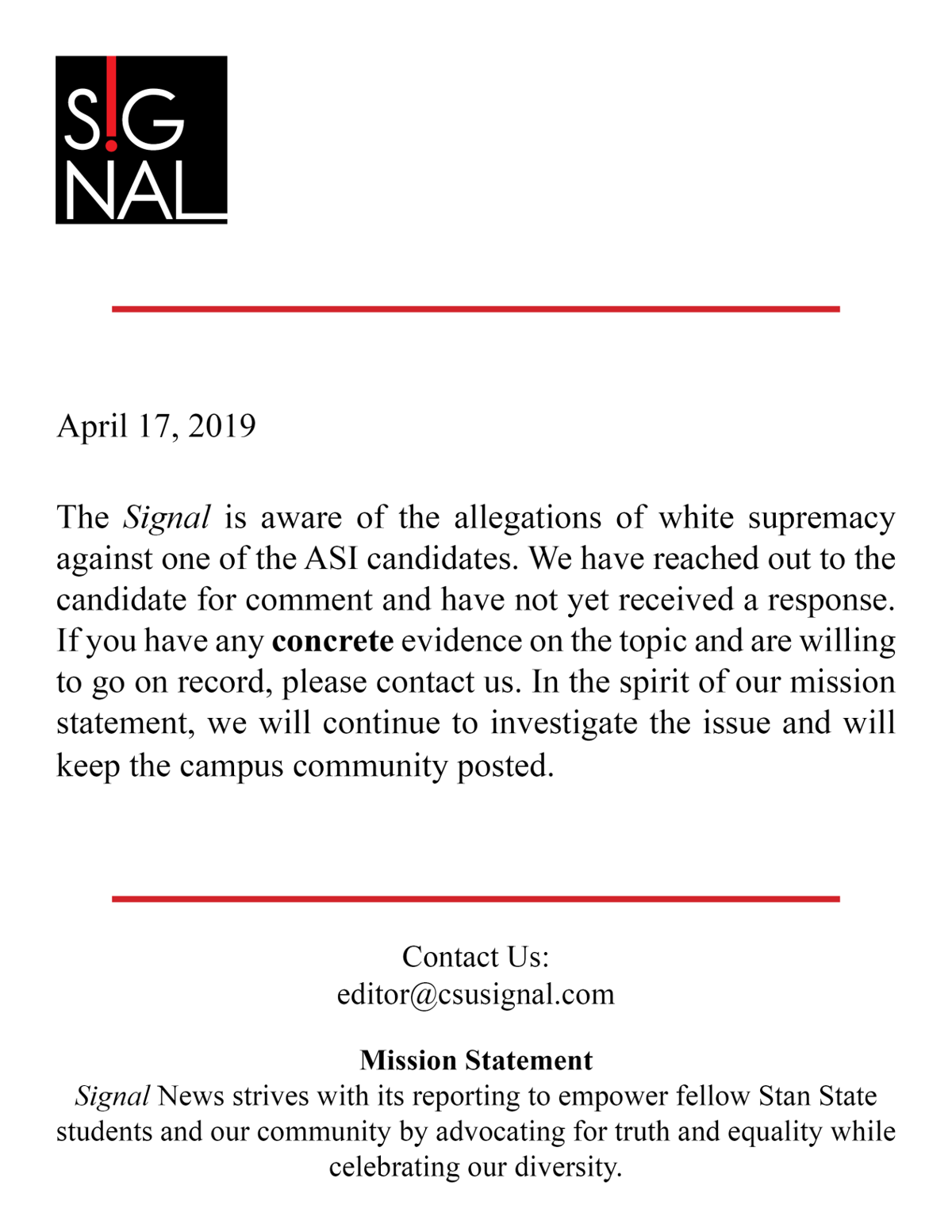 Tuesday evening, the day before Stan State’s ASI elections, an anonymous blog post was released speculating that Christopher Thompson, a candidate for the Director of the College of Business, was a member of the white supremacy group Identity Evropa.

The marker of a good journalist, and a good news outlet, is a refusal to get swept up in rumors when things like this go viral. The Signal received numerous messages on social media Wednesday requesting that we write on the topic.

The Nocara site’s information is not news nor is it true journalism. The blog (and this is a blog post, not a news article) draws conclusions from information on the chat site Discord.

Discord is an anonymous chat site, and to base conclusions about this candidate without other supporting evidence is not ethical journalism. Currently, there is no way to definitively know that “Chris N.” from the Discord chat is Christopher Thompson. “Chris N.” could be anyone. He could be an opposing candidate, an ex-friend, or anyone who has some general knowledge on Chris Thompson’s life. Of course, “Chris N.” could be Chris Thompson, too, but anonymous chat logs are not sufficient enough evidence for us, as a news outlet, to make that claim.

We needed, and now have, a statement from Chris Thompson and are working to collect other statements from a variety of sources on campus. We are working to gather all sides of the story.

In fact, if the Signal were to publish something similar to what Nocara did, we could open ourselves up to claims of libel.

To Stan State students reading the Nocara site, the evidence presented may seem concrete; however, to a journalist, it is not concrete enough to publish without supporting evidence.

Yesterday I worked with my coworkers at the Signal to write a press release explaining why we have not yet published an article about the allegations against Thompson. We asked for concrete evidence, for quotes from people willing to go on the record, so that we can gather as much information as possible.

I’m sad that I have to say this, but the Signal does not in any sense support white supremacy or want to defend white supremacists. We’ve published numerous articles covering the Identity Evropa posters on campus and the subsequent teach out. In fact, our commitment to diversity is even written into our mission statement.

However, the Signal also will not publish allegations, claims, or accusations without supporting evidence. No reputable news outlet will.

I’m proud to work for a news organization that is committed to truth, honesty, and integrity. I’m proud that we are choosing to research all sides of the issue before we publish information. I’m proud that we celebrate and protect our team’s and our campus’ diversity.

The Signal is continuing to gather interviews and investigate the allegations against Thompson. We will continue to keep the campus community informed. We are not yet taking a stand for or against this candidate.

Until then, I encourage the campus community to band together against racism and white supremacy, to support each other in the face of the hate that has appeared on campus, but also to think critically about this issue before drawing conclusions.

Great work. Thank you for helping to clear Chris's name. As a friend of his it has been awful watching how much hate has poured in from posts that could so easily be faked. This is heartwarming to see.