Skip to main content
You have permission to edit this article.
Edit
News ▼
Arts & Entertainment ▼
Sports
La Letra Ñ ▼
Opinion ▼
E-Edition ▼
Archive
Multimedia ▼
About Us ▼
Share This
1 of 2 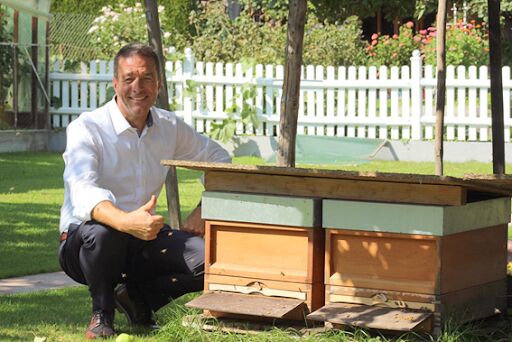 Beekeeper Peter Baur in front of some of his hives in a small town in Bavaria, Germany. (Photo by Julia Lorenz) 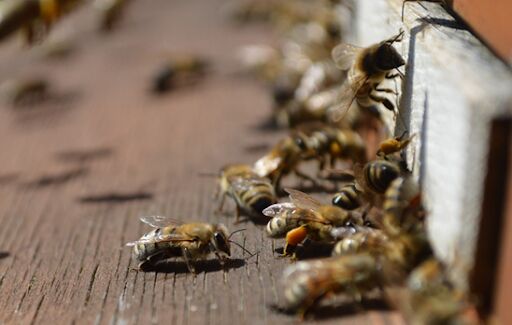 Bees in front of the hive with orange shining "pollen panties.” (Photo by Julia Lorenz)

Peter Baur, a hobby beekeeper from Bavaria, Germany, has been producing certified organic honey for 8 years now. Because dealing with animals always accompanied him, especially in his youth, he discovered beekeeping for himself.

Apart from working with the animals, Baur also wants to give young people more knowledge about the subject through his Instagram account @89284_honey, where he informs followers about the life of the bee and the work of the beekeeper.

Honey has numerous vitamins, minerals and anti-inflammatory substances, which is why Baur feels it is so important to create more awareness about quality.

"Many don't realize how harmful colorings and flavorings are in the fake product,” said Daisy Pena (freshman, Nursing).

In Germany, the main focus of beekeeping is honey production. In the United States, the focus is usually on the love of the animal and not on the economic profit from the honey. However, this is not the case everywhere, because the value of the pollination service of honeybees exceeds the value of the production of honey by a factor of 10 to 15.

"The honey yield is not the really important contribution of bees - rather it is the pollination service," explained Baur.

In the USA, for example, beekeepers can be found who focus exclusively on the pollination performance of bees. The background to this branch of the economy lies in huge monoculture areas, such as those found in California's Central Valley. Here, some 60 million almond trees grow over an area of 1,000 square miles. Since these are not self-pollinating, honeybees are an essential part of commercial almond production, which accounts for between 50 and 80% of world production.

Migratory Bees in the United States

Within the two-week almond bloom period, approximately 1.8 million hives, each with 50,000 bees, are transported to plantations in the Central Valley. According to the American Beekeeping Federation, this provides pollination for nearly one million acres of almond acreage. It is not possible for the bees to settle in this area year-round, as the nectar-seeking livestock would not find food outside of the two-week flowering period. Therefore, the colonies spend the fall and winter in climatically mild Florida where they are fed to accelerate colony growth. Finally, the first pollination stop follows in the Central Valley.

Mael Le Breton, who studies agriculture at Stan State, believes that the school’s Sustainable Garden on campus would be a very good opportunity to teach students about bees. Not only would students learn more about the animals, but they would also be able to have their own planted produce pollinated quite automatically.

"Bees on campus would be a great way to give young people more of a connection to our natural world and in general to planting, to pollinating, as well as harvesting," said Le Breton.

Another benefit would be the collected pollen from the bees. The consumption of bee pollen has numerous health benefits due to the variety of antioxidants, amino acids, and micronutrients contained in the pollen. It is used all over the world for medicinal and therapeutic purposes. Eating it strengthens the immune system, reduces inflammation, and counteracts allergies. This would allow students at Stan State to cultivate their own healthy garden.

"Without question, natural produce is the best thing to ingest," emphasized Pena.

Not All Honey is Made the Same

On the list of the world's most frequently adulterated foods, honey ranks third (after olive oil and milk). Its definition, according to the American Honey Producers Association, is simple and beautiful: honey is the sweet substance that bees produce by ingesting nectar or honeydew, enriching it with endogenous substances, changing it in their bodies, storing it in honeycombs and allowing it to ripen. Nothing may be added to it, and nothing removed from it. However, there is even "honey" that is produced entirely without bees.

You can find honey in some places as a single portion on breakfast buffets or as a bottle on the supermarket shelf: pure sugar syrup with colorant and honey flavor.

Marina Poe (junior, Anthropology) considers the quality of her honey "really important." For this reason, she prefers to shop at local markets, because here she can find honey that is not sugar syrup.

What is Fake Honey?

Fake honey is any honey that has been altered or has additives. It looks very similar to real honey - often the only way to figure it out is to test it. Bees produce pure honey, while some companies make their own honey or dilute the pure honey produced by bees. Fake honey contains additives such as syrup, molasses, water, etc. and does not have some of the properties of real honey such as taste, aroma and shelf life.

How to Test Your Honey

When collecting nectar, the bee carries the sticky pollen grains on its legs from flower to flower and finally into the hive. The pollen analysis of a honey therefore reveals which flowers have been flown to. In this way, false information about the origin or variety can be tracked down.

"Organic honey is more expensive than regular honey because of compliance with regulations, including animal welfare," Baur explained.

When purchased at drugstores such as Walgreens, Rite Aid and CVS, the error rate of honey analysis was 100%! This means that the product has nothing to do with honey. The good news: The samples purchased at farmers markets and health food stores were enriched with pollen.

You don't have to go to the lab every time to have your honey tested. With the tests presented below, you can find out for yourself if your honey is a true natural product or a modified product.

Now you have a few possibilities to find out whether your honey is real liquid gold or an unhealthy alternative. If you want to learn more about the topic, there are a number of resources, including the documentary "More Than Honey" by Markus Imhoof.