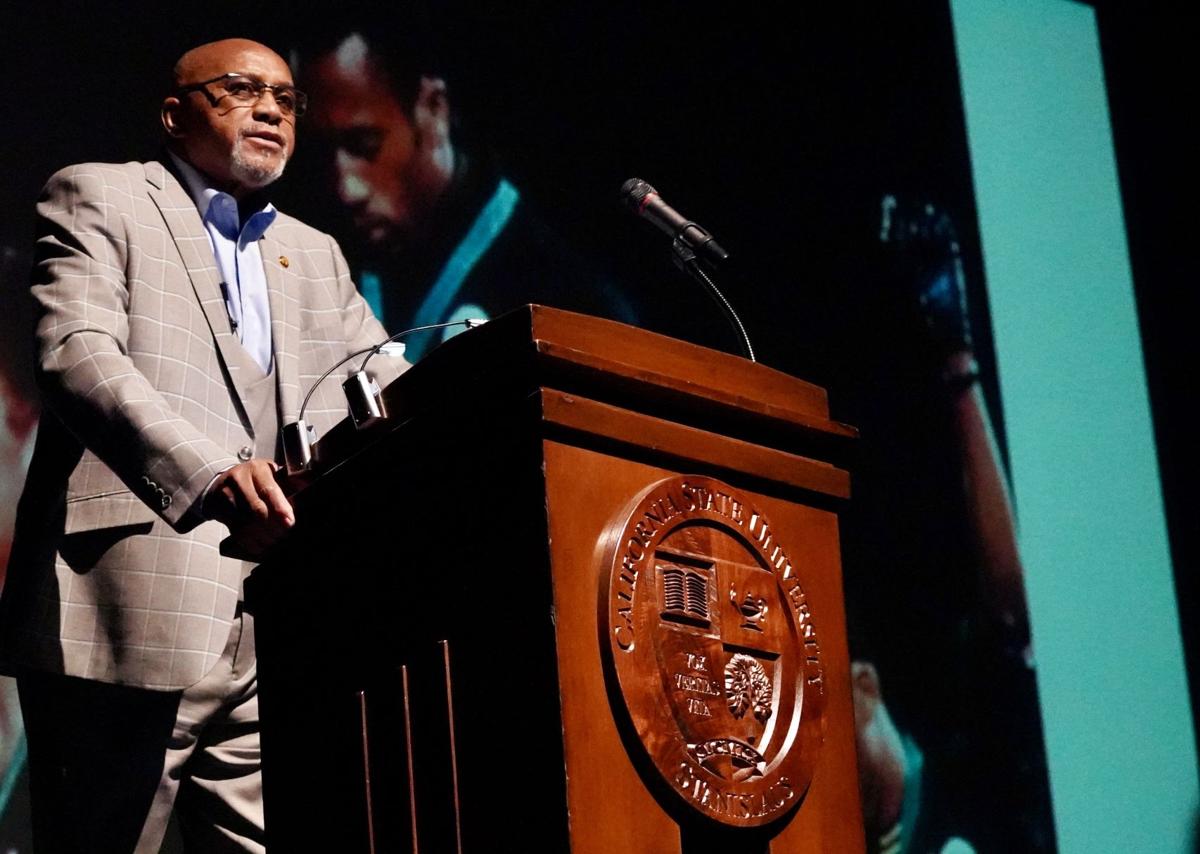 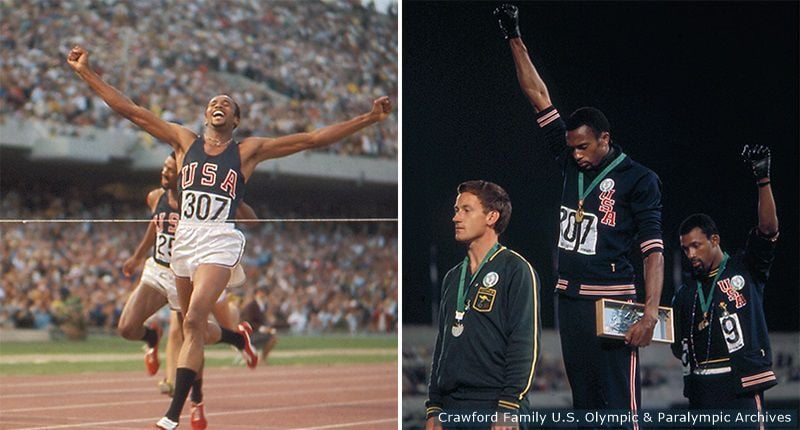 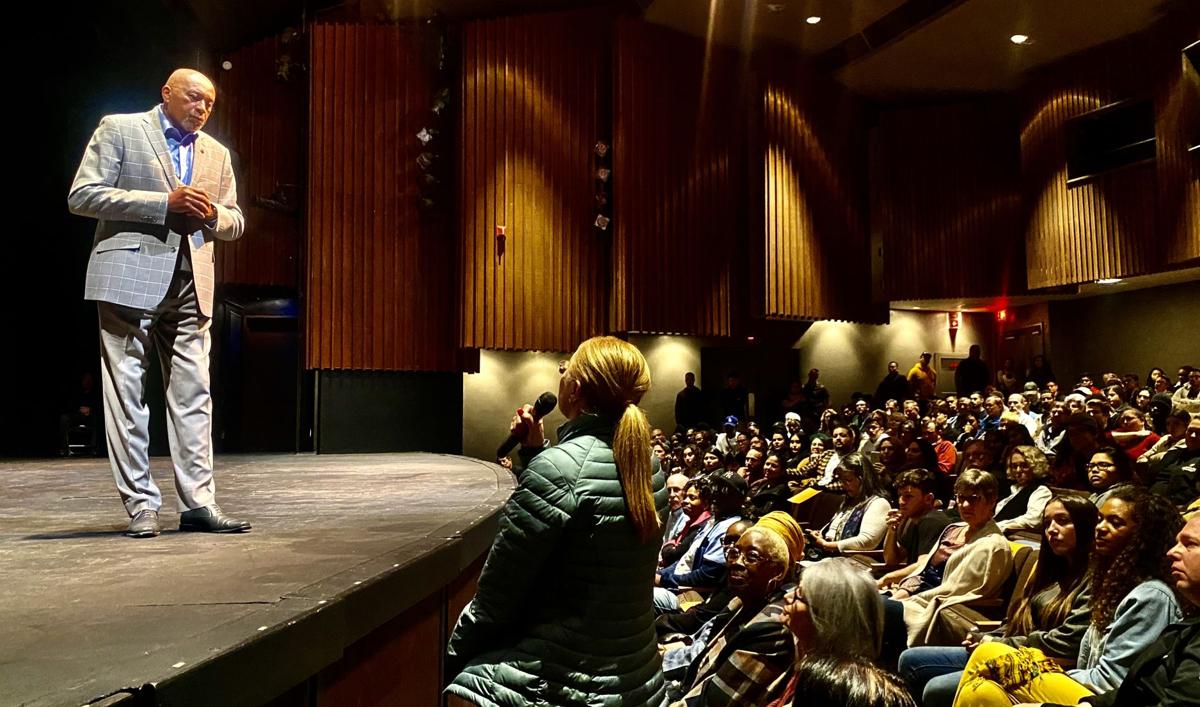 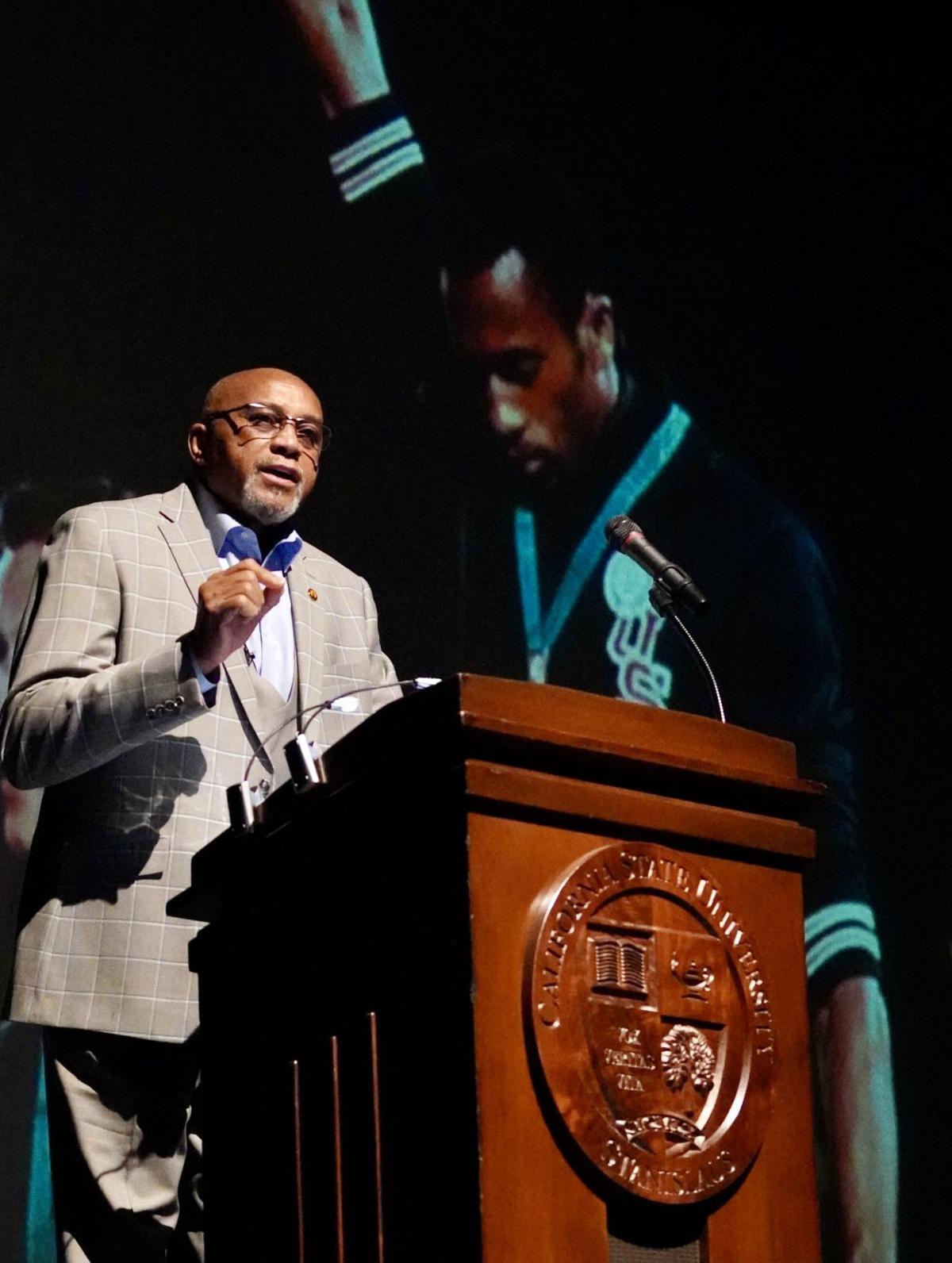 Dr. Tommie Smith concluded his speech by urging the audience to make a positive impact on their communities. (Signal Photo/ Randel Montenegro)

Excitement filled the air Friday night as Stan State hosted Dr. Tommie Smith. Smith is globally recognized for bowing his head and raising a black power fist during the U.S. National Anthem at the 1968 Olympics to raise awareness of racism and human rights violations.

The event began with a beautiful performance of the Black National Anthem by Stan State freshman Kiera Taylor.

President Junn welcomed everyone with an acknowledgement and recognition that Stan State is on indigenous, Yokut land.

History professor Dr. Bret Carroll livened up the audience by cracking jokes, but most importantly by thanking everyone who worked hard to make this event possible.

Stan State alumni MiShaye Venerable is surprisingly first cousins with Dr. Tommie Smith herself, and we were all as shocked as she was to find out the news. Venerable went on to highlight the importance and pressure that student athletes face.

“Dr. Tommie Smith has paved the way for student athlete-activists to use their platform to speak out against social injustice. Student athletes perform at a high level, maintain decent grades and keep a solid reputation. On top of being exploited and a lack of support for their mental and emotional health, it takes courage to stand up against social injustices. Thank you for being the foundation of a movement that allows student activists to be vocal in the face of injustice,” said Venerable.

Dr. Samuel Regalado, history professor, presented a film that gave the audience an insight into Dr. Tommie Smith’s life. He was raised here in the Central Valley, in Lemoore, where he excelled at a young age in track before heading off to college at San Jose State University. He studied sociology and has since then become an educator and trainer after competing in the 1968 Olympics.

After the video ended, Regaldo brought out who the audience had eagerly been waiting for, Dr. Tommie Smith himself.

He also put an emphasis on the educational process.

Dr. Tommie Smith explained why he bowed his head and lifted his fist during the national anthem in 1968. “When I boarded that victory stand, it was a cry for freedom. It meant more than winning the gold medal... I had to win the stand.”

He proceeded to explain where his strength to be this courageous came from.

“I believe in divine intervention and I believe that standing for social justice anytime is redempting and the sacrifice of today is no greater than that those who [fought] for justice, before the civil war, emancipation proclamation of 1863. A battle is never won if at first you don’t engage.”

Dr. Tommie Smith also drew comparison to modern day athlete-activists like Colin Kaepernick, who grew up in Turlock. Although Smith paved the way, he explained that he had sacrifices that athletes today don’t face as much, and that is financial instability. Smith explained that he lost everything after he came home and athletes today don’t face the same repercussions.

He concluded his speech with a challenge for all of those who attended.

“I challenge all of us to become proactive in all we do because our life begins to end the day you become silent to things that matter... We must be willing to sacrifice in order to achieve unity and hope.”

Community member Davon Johnson explained how this event has changed his life. “With this event, it’s been inspiring because you see a figure, either on TV or on the news, but to actually witness it, it’s something that is life changing. There are not many moments when you get this.”

Jarel Grant (senior, Sociology) explained that we need more events similar to this one to help empower our students.

“As a student here, we definitely need more events like this. Having Dr. Tommie Smith here emphasized that we need to do so much more in our community. This is definitely a human issue and a black issue and it has to come together and merge. We need to continue unity.”