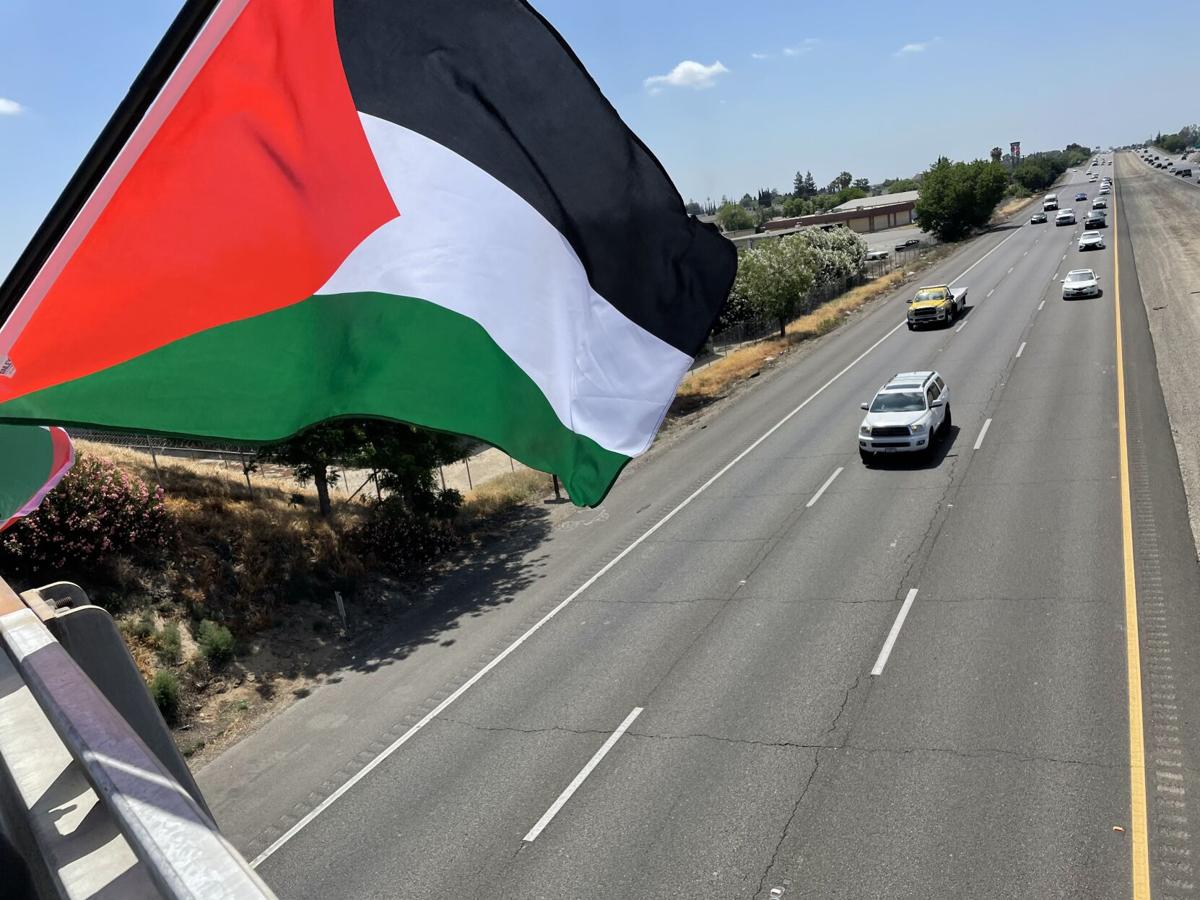 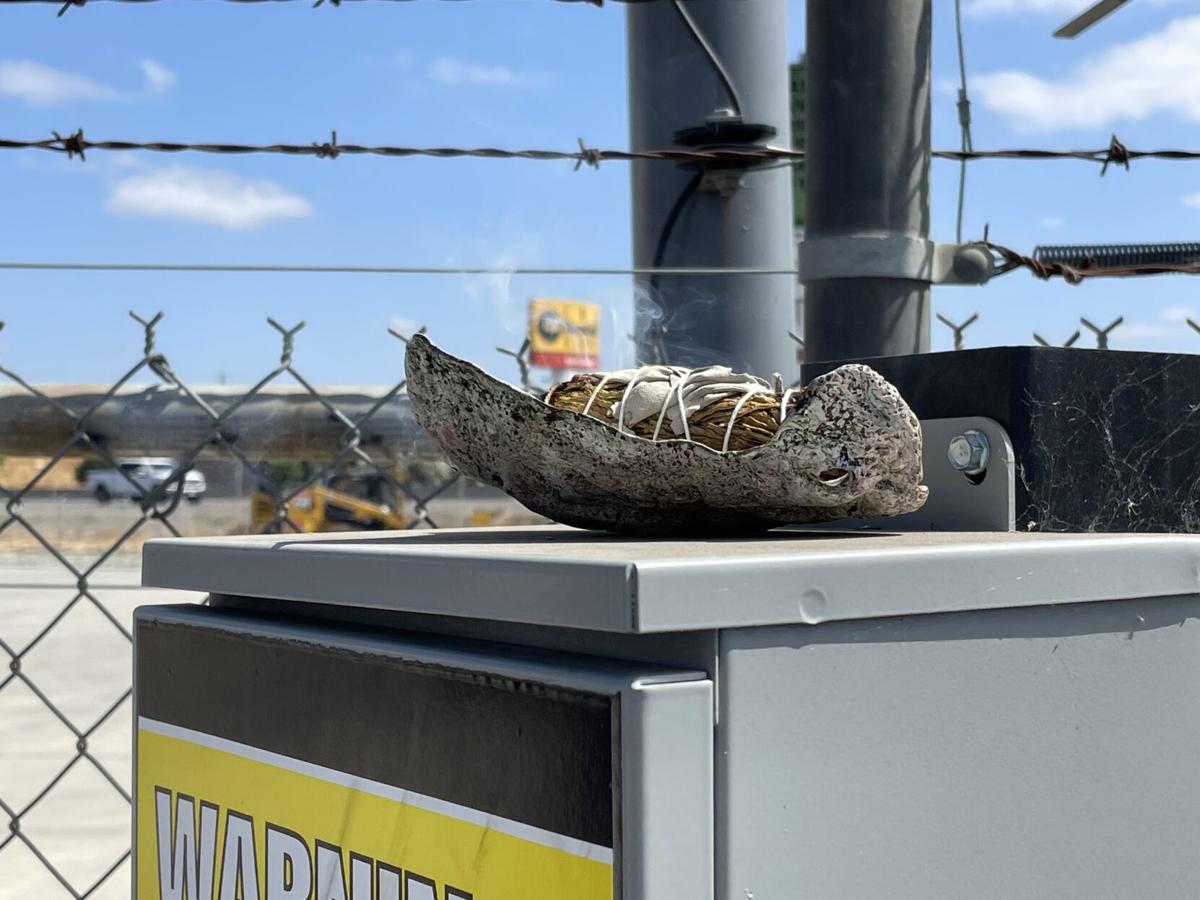 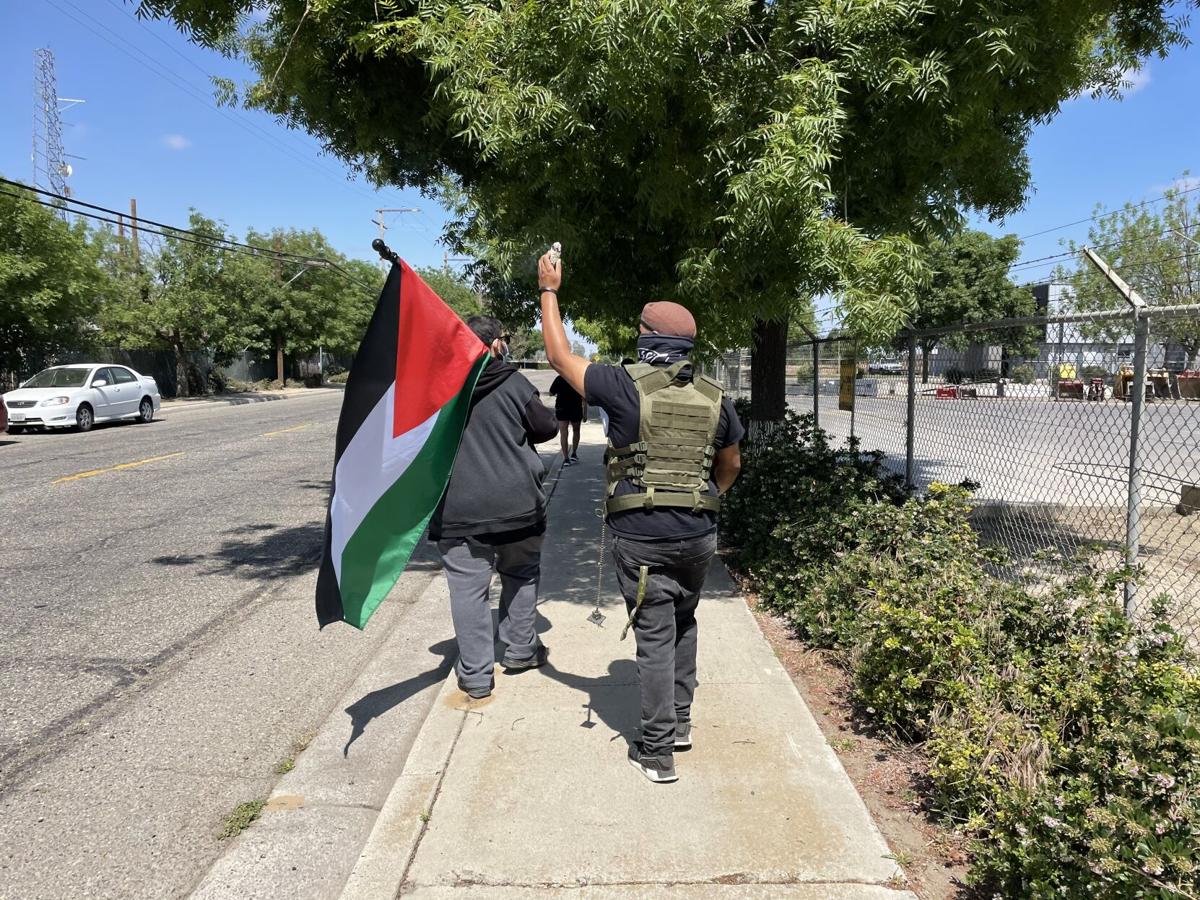 Protesters marching down the street with a Palestinian flag and a Brown Beret cleansing the space with sage. (Signal Photo/ Sandra Plascencia-Rodriguez). 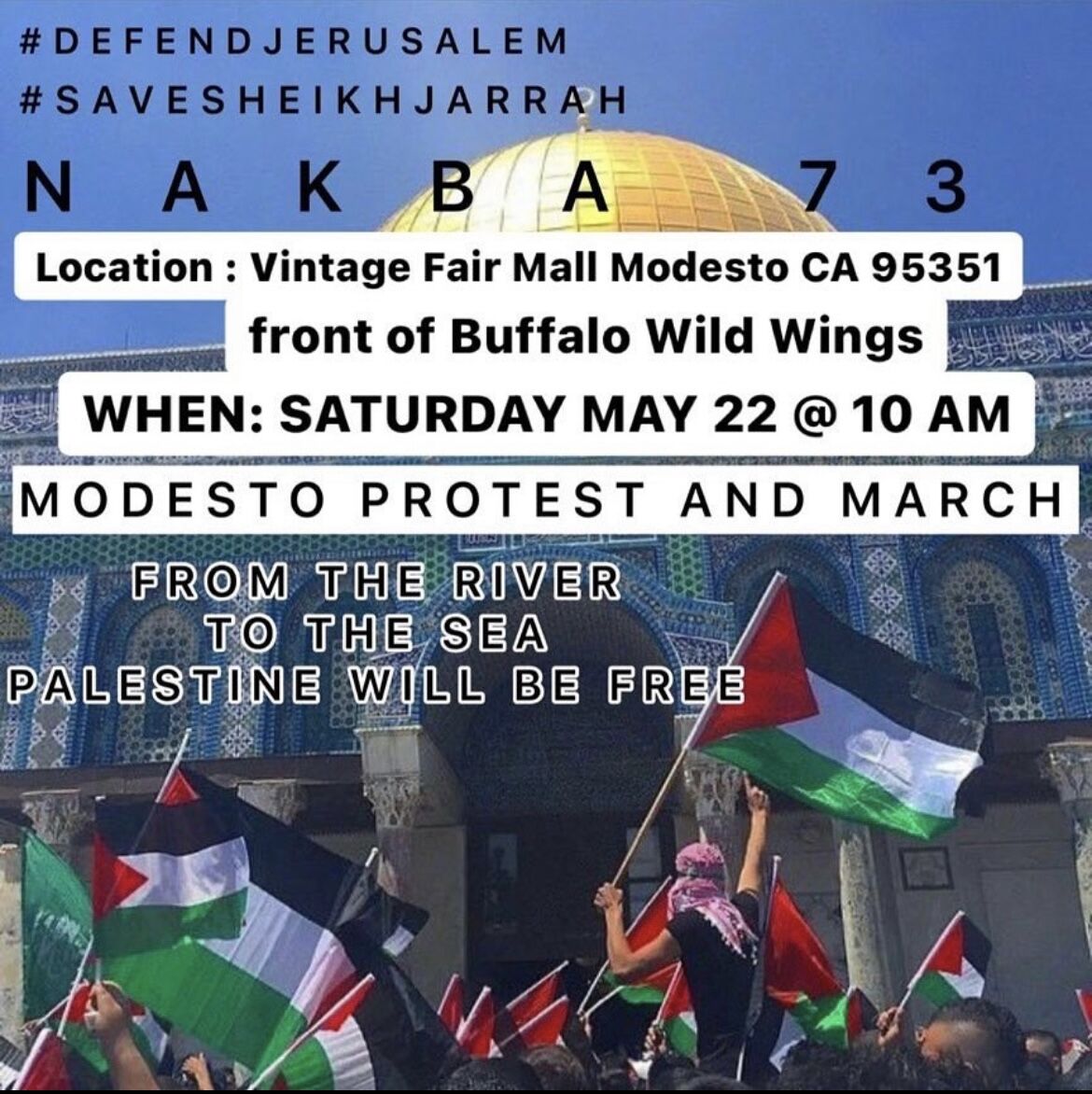 Palestinian flags waved high and proud this weekend above the highway overpass near Walnut street in Turlock, as protesters showed solidarity with Palestine following the recent Israeli airstrike attacks against the Palestinians.

The group gathered to protest against Cat, a rental company that rents out construction equipment for anyone in need. This company has been supplying Israel with bulldozing equipment for decades now and the machinery is being used to wrongfully evict Palestinians from their homes as well as destroy important buildings.

Although the terror Israel is inflicting on Palestinians has recently been making headlines because of the airstrikes and destruction being broadcasted all over the news, this is not a recent or new occurrence. In fact, this is just the first time it’s getting international attention, but this has been going on for roughly 100 years, escalating greatly within the past 70 years.

Initially this conflict began when Britain took control of the Ottoman Empire after World War I. This included parts of the Middle East as well as the area initially known as Palestine. In Palestine, there was a majority Arabic population and a minority Jewish population and a lot of tension between the two. This land is considered the holy land for the Jewish population, so they feel they have a right to occupy the land, but the land was already occupied by Palestinians at the time.

As time has passed by, the Jewish population has slowly been stripping the Palestinians of not only their land and rights, but of their safety, freedom, and sanity. This has all been backed up by Imperialist powers like the United Kingdom, France, Canada and even the United States. Recently President Joe Biden’s administration approved a $735 million dollar arms sale to the state of Israel. These weapons will be used to inflict more terrorism on the Palestinians.

Seeing all of the injustice happening is what fueled folks from the 209 to gather in front of the Cat building and show solidarity with Palestinians.

For Stan State alumnus and organizer, Julissa Ruiz Ramirez, what is happening in Palestine seemed familiar to what happened here, on this land.

“It wasn’t through peace and nonviolence and manifest destiny, it was through violence and genocide that the U.S. occupied this land. We don’t want that to happen to our Palestinian comrades, but it has been happening. Israeli occupation has been committing genocide, ethnic cleansing, [and] violence against Palestinians,” said Ruiz Ramirez.

Following her statements, Ruiz Ramirez also read a statement that Congressman Josh Harder released following the recent airstrikes in Gaza. The full statement can be found here, but specifically, Congressman Harder stated, “I condemn Hamas’ indiscriminate attacks on peaceful men, women, and children. Israel has the right to defend herself against these attacks. Extremist forces in Jerusalem also must show restraint rather than escalate this violence.”

The crowd showed disapproval of his statement, stating that condemning both sides is a gross misrepresentation of the situation when one side is suffering more than the other.

Samuel Garcia, community activist and member of the Party for Socialism and Liberation (PSL), also spoke at the protest. He highlighted American interest in Israel claiming, “Israel is the art of American Imperialism inside the Middle East.” He went on to explain that if it were not for Israel, Americans could not have been in Iraq, Afghanistan or anywhere in the Middle East.

“For every American soldier and base in the Middle East, the starting point is Israel,” said Garcia.

After local activists spoke, the group marched up the street from the Cat building to the highway overpass chanting, “From the river to the sea, Palestine will be free!”

Stan State student Lurdes Carrillo Alvarado (senior, Child Development) said she loved how the protest went. “I thought it was cool to protest above the freeway overpass. Seeing the Palestinian flag wave from side to side looked pretty cool.” When asked if she would attend another protest she stated, “Yes, I would love to continue to show my support to the Palestinians. It breaks my heart to see the rumbles that the missiles caused as well as the kids searching for their toys amidst the debris.”

Guadalupe Piceno (senior, Business, Ethnic Studies) also attended the protest. She felt that it was a powerful event.

“It was a powerful experience seeing the amount of solidarity we had with the honks on an international issue within the Central Valley. I think it shows that a lot of seeds are beginning to sprout here and there is strong solidarity between marginalized communities here too,” said Piceno.

The seeds of liberation are being planted all across the world. They can be found here, in the Central Valley within our local activists, but also oceans away in other countries. Whether in the 559, 209, or Palestine, the seeds for liberation have been planted and are slowly beginning to sprout. Oppression is a global issue and through solidarity, one day we will all be free and sprout like a lotus flower.

Another protest in solidarity with Palestine is coming up this Saturday, May 22 at 10 a.m. in Modesto at the Vintage Faire Mall in front of Buffalo Wild Wings. More information can be found at the @cvbipocc Instagram page!