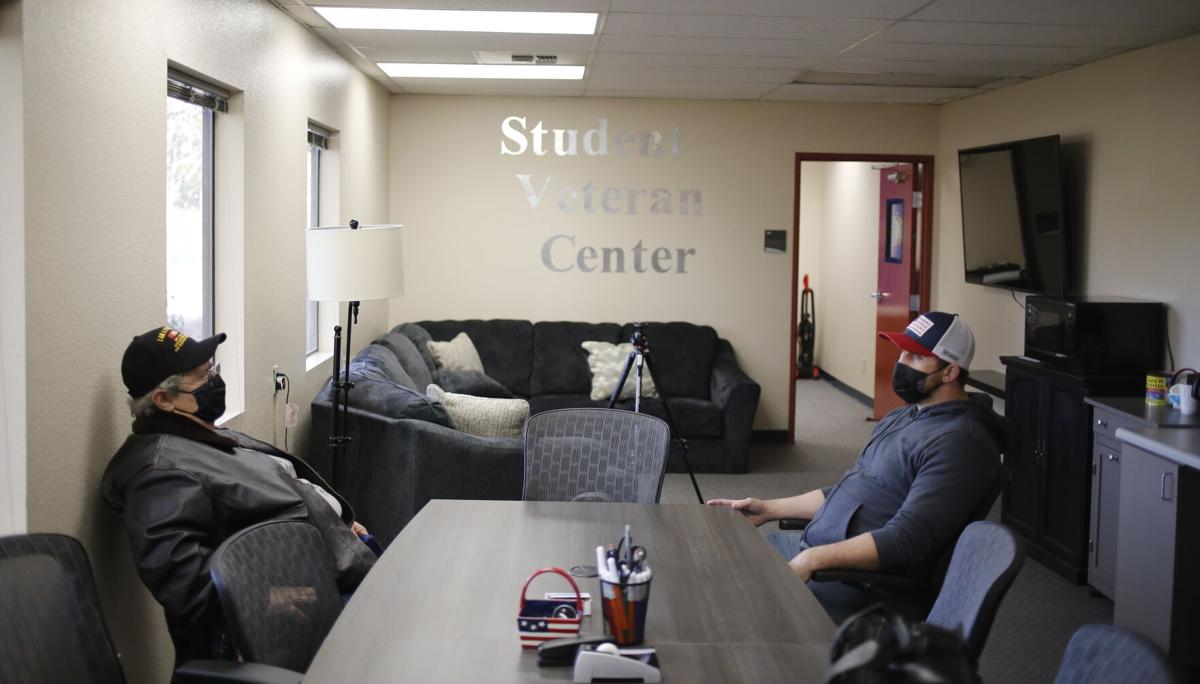 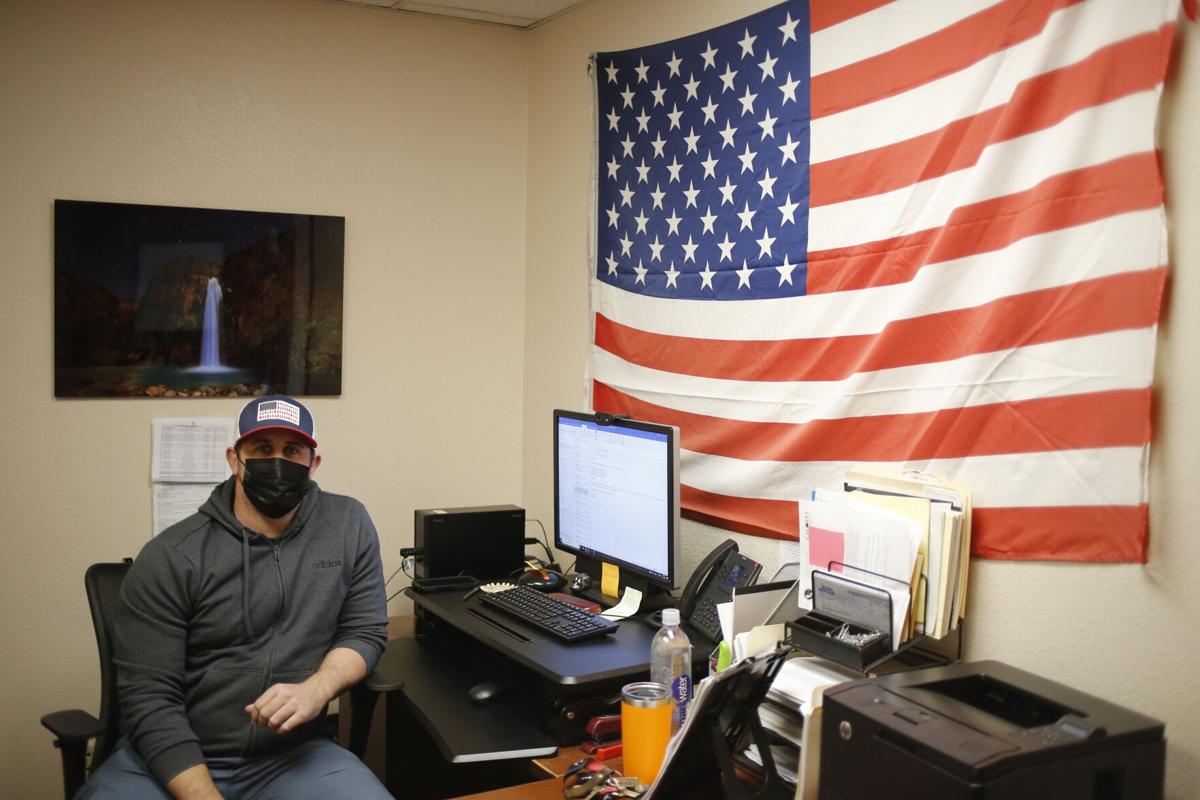 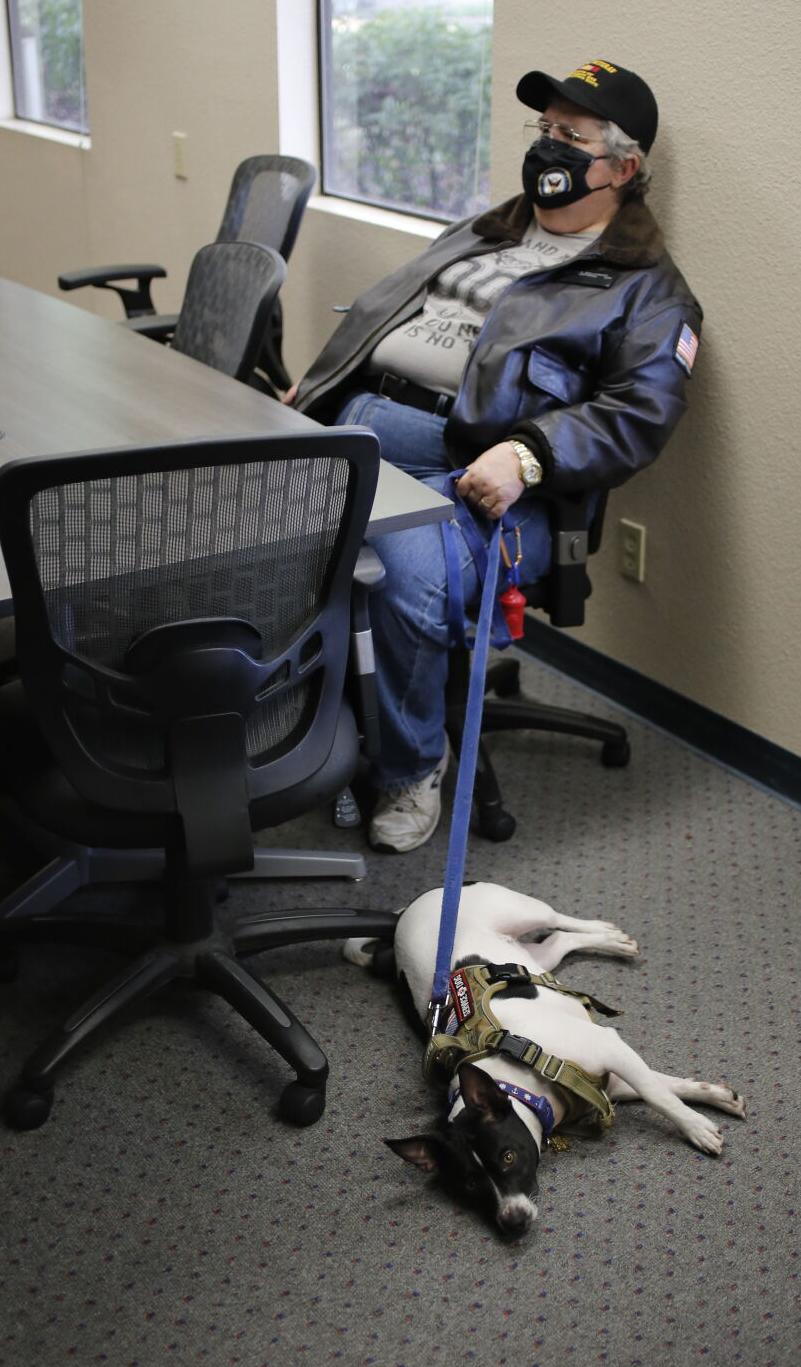 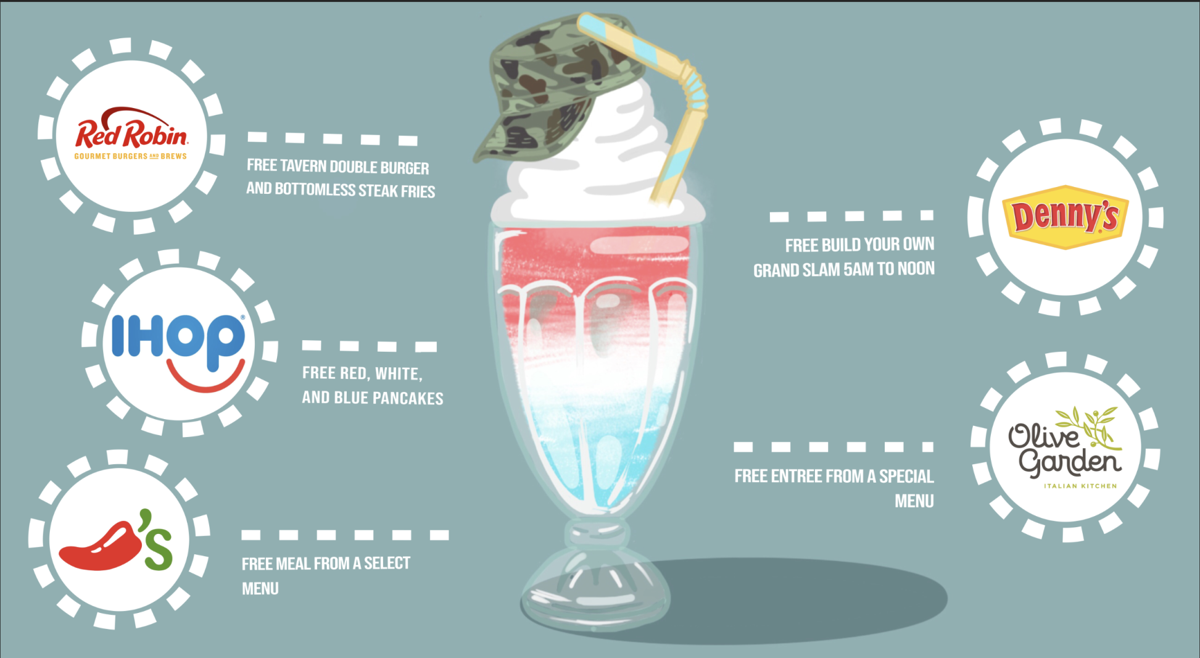 Many local restaurants are offering discounts for current and former service members on Veterans Day. (Graphic by Samantha Tonarelli)

While Veterans Day is on a Thursday this year, the impact of COVID-19 is continuing to put a damper on possible on-campus festivities. However, veterans at Stanislaus State should not feel left out by the lack of events and activities taking place on campus.

Stanislaus State continues to offer many options of support for all students, including student veterans. These resources include StanCares, Human Resources, Equal Opportunity and Compliance, Student Veterans of America (currently forming club), and Veterans Affairs.

Chicago Houdek is the Student Veteran Coordinator at Stan State. He helps veteran students get the necessary documentation together to be turned into the college and the department of Veterans Affairs. This ensures that students are paid for the GI Bill in a timely manner.

Houdek comes from a military family. His parents, grandparents, and multiple other family members have all served in the military. His military background, as well as a Masters Degree from Arizona State University, allow for him to have a level of understanding that allows him to support the student veterans at Stanislaus State.

“This year, there is nothing specifically planned due to COVID-19,” said Houdek. “Next year, there will be an event for veteran’s day.”

This does not mean that there is nothing planned for student veterans in the near future at Stanislaus State.

“We will, however, still have our luncheon for veteran graduates for the spring,” said Houdek. “This is a way to honor all the graduates of that year that we provide them a lunch and a small ceremony. Someone will come out from the congressman’s office and the mayor’s office. We hand out certificates and a stole of gratitude.”

This Veterans Day, student veterans will have the usual opportunities off campus to be supported by businesses.

“There are free lunches, free breakfast, free dinners [across the community]. I always tell people to take advantage of that,” Houdek said.

June Sidlauskasis, a senior at Stanislaus State studying Psychology, is also a veteran, having served in the United States Navy from 1977 to 1997. She served for twenty years and retired after having been involved in communications for the Navy.

“I come from a long line of military family and you could track my mother’s side of the family all the way back to the Revolutionary War,” said Sidlauskas.

“Veterans Day is a time for remembering why we have. I know we have Memorial Day for our long gone, but Veterans Day means remembering our MIA (Missing in Action) and POWs (Prisoners of War). I wear a black armband in memory of that," Sidlauskas explained.

She also remembers her time serving in the military on Veterans Day.

Sidlauskas said that the Cold War was more difficult due to the fact that your enemy was rarely in front of you, but instead was working against you behind the scenes.

“Veterans Day reminds me that my service protects the freedom that my family wakes up with. It is not all about the freebie stuff. It is about the simple thank you for your service and being recognized that way,” Sidlauskas said.

Sidlauskas and her husband will take part in a dinner at Outback Steakhouse or Sizzlers, but will not be restaurant hopping to try to get the most out of the day.

“That’s not what I joined for,” said Sidlauskas. “When I joined, they were still spitting on veterans from the Vietnam War and it was not until Ronald Reagan came into office that people started to really respect the military again.”

“I would go to recognize the veterans that are shut-ins because they are unable to get out of the hospitals. I would thank them for their service,” Sidlauskas said.

Sidlauskas has not been able to spend as much time as she would like in the veterans center due to COVID-19 protocols.

“Chicago is a very understanding person,” said Sidlauskas. “If you need someone to just talk to, he is there for you."

The veterans center also has amenities that student veterans can utilize once it opens up again.

“The veterans center has a television, microwave and computers. Anything you might want at home, but it is a quiet place that you can just chill out at," explained Sidlauskas.

Sidlauskas is also looking to start a student organization on campus for veterans as well as members of the warrior community.

“A lot of veterans, when they get out of the military, there is this hole and I know that hole,” said Sidlauskas. “I didn’t realize that hole was there for comradeship. One reason that veterans need to band together is because of the high suicide rate.”

Sidlauskas explained that 22 veterans commit suicide everyday. The organization Train a Dog - Save A Warrior states this statistic on their website when talking about how dogs can help save the lives of veterans.

“The VA is concerned about the rate of suicides going up because veterans feel like their time served is a waste, and I am here to tell them that their time was not a waste,” Sidlaukas said.

Sidlauskas wants student veterans to get involved with veterans clubs because they are there to help and provide a sense of comradery. The organization takes part in national events that Sidlauskas says make her feel younger and that veterans have a lot of fun.

Sidlauskas also explained that student veterans typically have a higher GPA than other students.

“When I transferred to Stanislaus State, I graduated from Delta College with my Associates Degree with honors,” explained Sidlauskas. “When I was a teenager, I never thought that would be done.”

This club is a project that is important for Sidlauskas.

“I want a place that veterans have a place where they know they can do volunteer service to help out new veterans, fundraisers to help out different organizations, help out with Habitat for Humanity, and get involved with the community,” she explained.

Sidlauskas does not want it to take a lot of veterans' time, but wants to help out in the community where they can. She also wants to give back to the community.

“In the military, we were classified as warriors and our school mascot is a warrior. Whether you are a veteran or a civilian, you are still a warrior and a warrior is somebody who does something from within. They’re not someone who runs out in front of a speeding bullet. A warrior is someone who is loyal to their code, ethics, or beliefs. For me being a warrior as a veteran and a Stan State student, my loyalty lies deep no matter where I am at,” Sidlauskas said.

“We are all teammates. Be there for your teammates,” she said

This sentiment is also shared throughout the Student Veterans Center, as the student veterans club is open to anyone who would like to be part of the group.

As for Veterans Day, Houdek shared a message for student veterans.

“Just enjoy the day. You’ve earned it. They’ve all sacrificed. They didn't have mom and dad for a lot of birthdays and holidays," Houdek said. All sorts of stories because of service. I missed out on the birth of my kid because I was on deployment.”

Veterans will be able to enjoy free food and services as well as discounts at some locations around the city. The VA has a list of places and what they are doing for Veterans Day this year.

Veterans that need support at Stanislaus State are encouraged to reach out to Chicago Houdek at choudek@csustan.edu.