You are the owner of this article.
Edit Article Add New Article
You have permission to edit this article.
Edit
News ▼
Arts & Entertainment ▼
La Letra Ñ ▼
Opinion ▼
E-Edition ▼
Archive
Multimedia ▼
About Us ▼
Sports
Share This
1 of 2 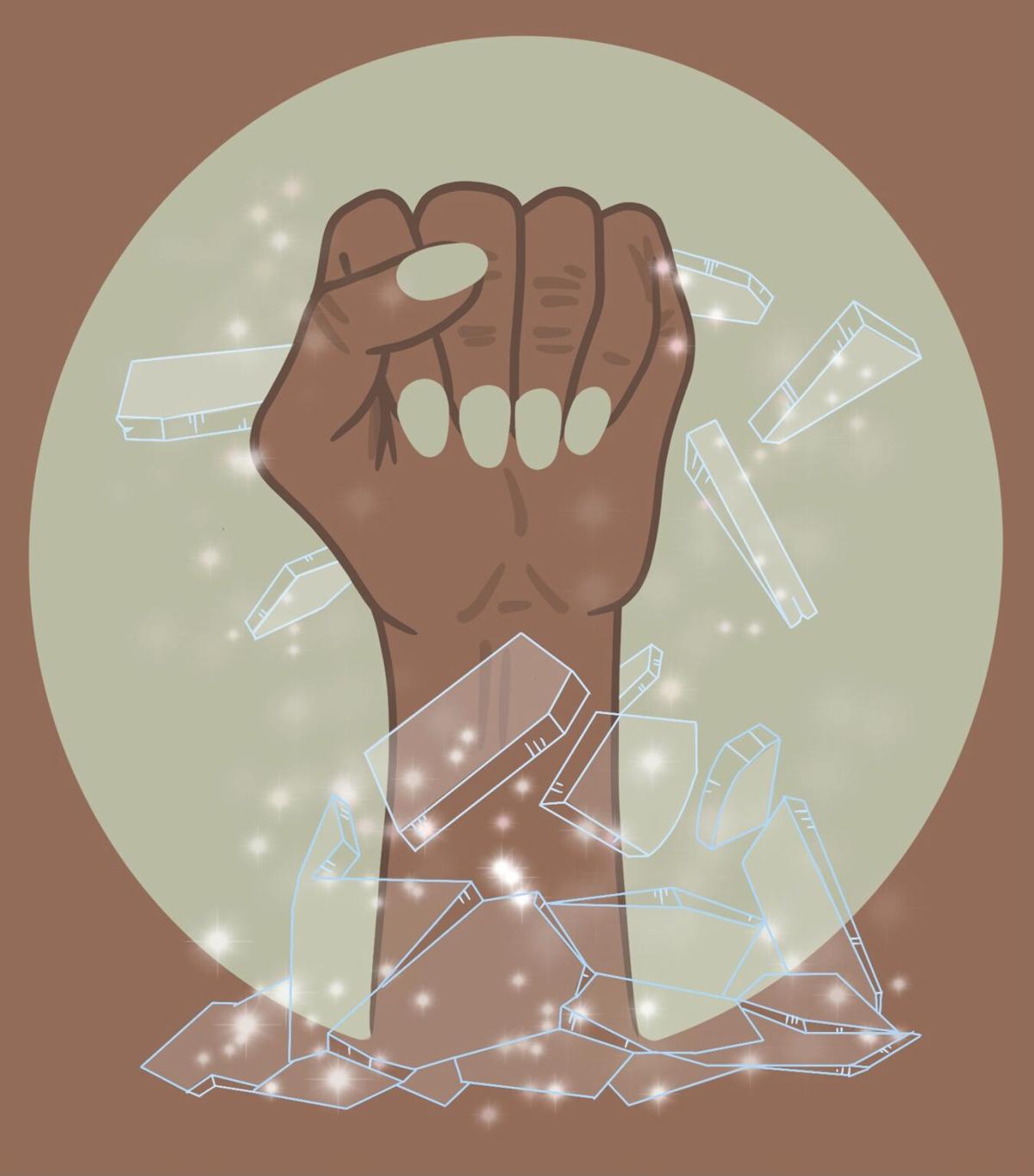 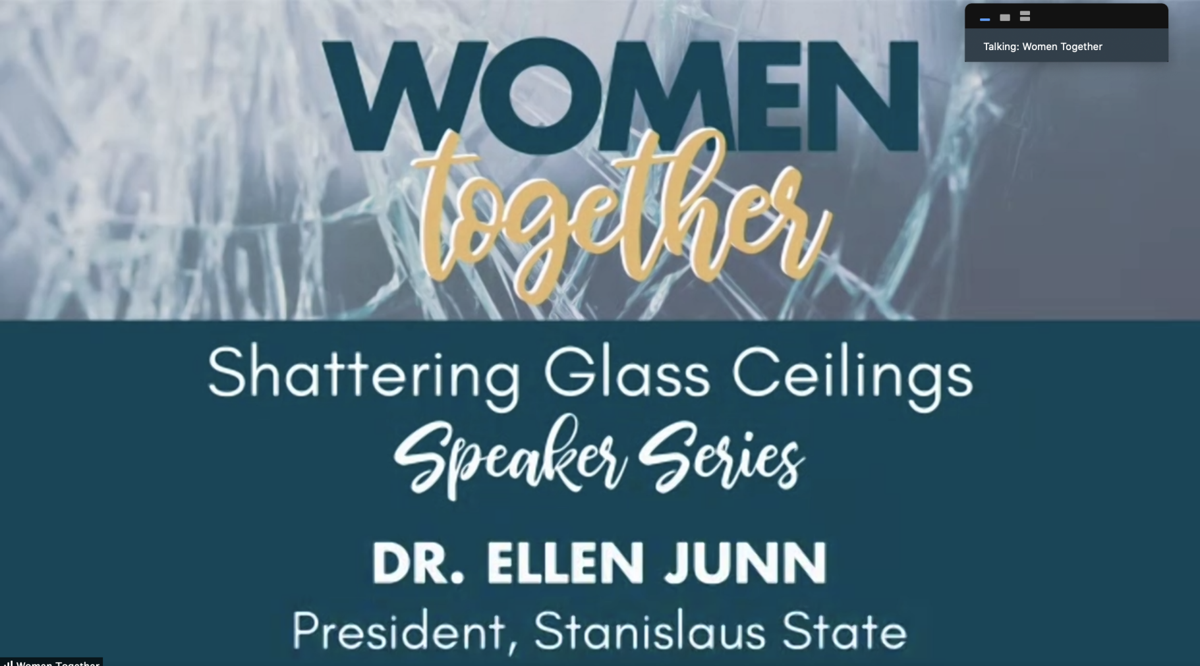 Ellen Junn, president of Stanislaus State University, was selected as the sixth speaker to take part in the Women Together: Shattering Glass Ceilings Speaker Series on September 1, 2021.

President Junn spoke to motivate and inspire women to reach their professional goals. She shared stories of her past and what it took for her to hold the position she has now at Stan State.

Junn began her presentation by speaking about her parents, who had migrated to the United States after the Korean War. Her parents had both been high school teachers at a private school in South Korea. After the war, her father had gone to the U.S. on a student visa. He would help his wife receive a student visa as well once he finished his masters degree.

However, Junn’s mother could not pick up from where she started and would instead have to start her studies over due to the effects that the war had had on her school.

“She was redoing her undergraduate degrees because her original institution was burned in the war, there was no record of her diploma or any of that,” Junn explained.

Soon after arriving in the US, Junn’s parents had settled down and begun growing their family. While growing up, Junn’s parents were very set on raising their children in the American lifestyle and would refrain from practicing Korean traditions and even gave all of their family traditionally American names.

Junn explained that the concept of the U.S. being a melting pot was very profound during this time and there has been a significant amount of change since then.

“Instead of saying that you have to melt away and forget your original country of origin along with your language, traditions, and history, the [more appropriate] metaphor [now] is more like a salad bowl: People come from everywhere and we should understand and appreciate all the different ingredients that make that salad so delicious." Junn said.

Junn went on to discuss her childhood. Growing up in a small Michigan community, she was made aware by those around her that she and her family did not look like the majority of the people within her community.

Junn also reflected on her family’s experience while living in Georgia during the early 1960’s. At that time, Georgia was undergoing great civil unrest during the midst of desegregation. Though she was a very young age at the time, she can still remember how she and her family were treated.

“At that point in time, we didn't talk much about what was happening, but I could see it all around me. I have very difficult memories as a child, walking to school and other people sometimes spitting on me for not being white, or pretending to shoot us and saying ‘Go home Japs,’” Junn recalled.

Junn then described the different highlights of her educational journey and how it helped her become the person she is today.

After graduating from high school, she attended the University of Michigan to major in cognitive psychology. After completing her studies at Michigan, she continued her studies at Princeton, where she finished her masters and doctorate in developmental psychology. From Princeton, she would find herself still in school 37 years later, working for several universities and eventually becoming Stanislaus State's current President.

In the final segment of her presentation, Junn gave the audience advice and offered words of wisdom that she herself had found useful throughout her life.

1. Be Comfortable About Who You Are

Junn made clear the importance of knowing family history and having pride in the different components that makes each person unique. These components may be positive or negative. However, Junn placed emphasis on the understanding that perfection cannot be expected.

“There is no such thing as a perfect person," Junn said. "No matter what happened to you when you were younger, you are worthy and you are talented. The power of the human mind, of your mind, and your resilience, is extraordinary.”

Junn continued her elaboration by explaining how having an accepted understanding of oneself can allow for an individual to share the uniqueness of their background as well as their life experiences as a step in building trust, promoting inclusivity and understanding the perspective of others.

2. Commit to Being a Knowledge Seeker

Junn credited her desire to constantly seek out knowledge as one of the components that helped her get to where she is today.

Many individuals at Stan State understand the process of obtaining knowledge as part of their educational or professional journey, however Junn cautions against complacency in the search for knowledge.

“Being a knowledge seeker will not necessarily get you anywhere. What’s more important is what you do with that knowledge,” said Junn

Many students are well versed in the process of learning and retaining new information, but Junn encourages the use of critical, analytical and creative thinking to create an even more sound understanding when searching for answers to the questions students face.

Those in leadership roles are often faced with the challenge of making difficult decisions on a regular basis. When asked how to balance the goal of being likable while still appearing confident in these situations, Junn offered a unique answer.

“Being likable is not a goal," said Junn. "Once you hold it up as a goal, you compromise everything else. You will make the wrong decision while trying to be liked. People who just do things to be liked, to me, shows a lack of confidence in their decision and also seems cowardly.”

While it is understandable why some individuals may find it difficult to remove being liked from their list of  goals, Junn provided further explanation of her stance on the topic.

“I never say that I'm going to agree with everyone every time, especially in a world as diverse as where we live today. When you have diverse opinions, you will often make a better decision. If you only listen to people who tell you what you want to hear, you'll be blindsided because you will never hear the other side," Junn explained. You don’t learn, and grow, and deepen your understanding of the nuances of an issue without opening yourself up to the other side.”

While many students may only view Junn as the president of Stanislaus State, others see her as an accomplished role model who’s personal journey has led to the collection of valuable advice to be shared with those willing to listen.