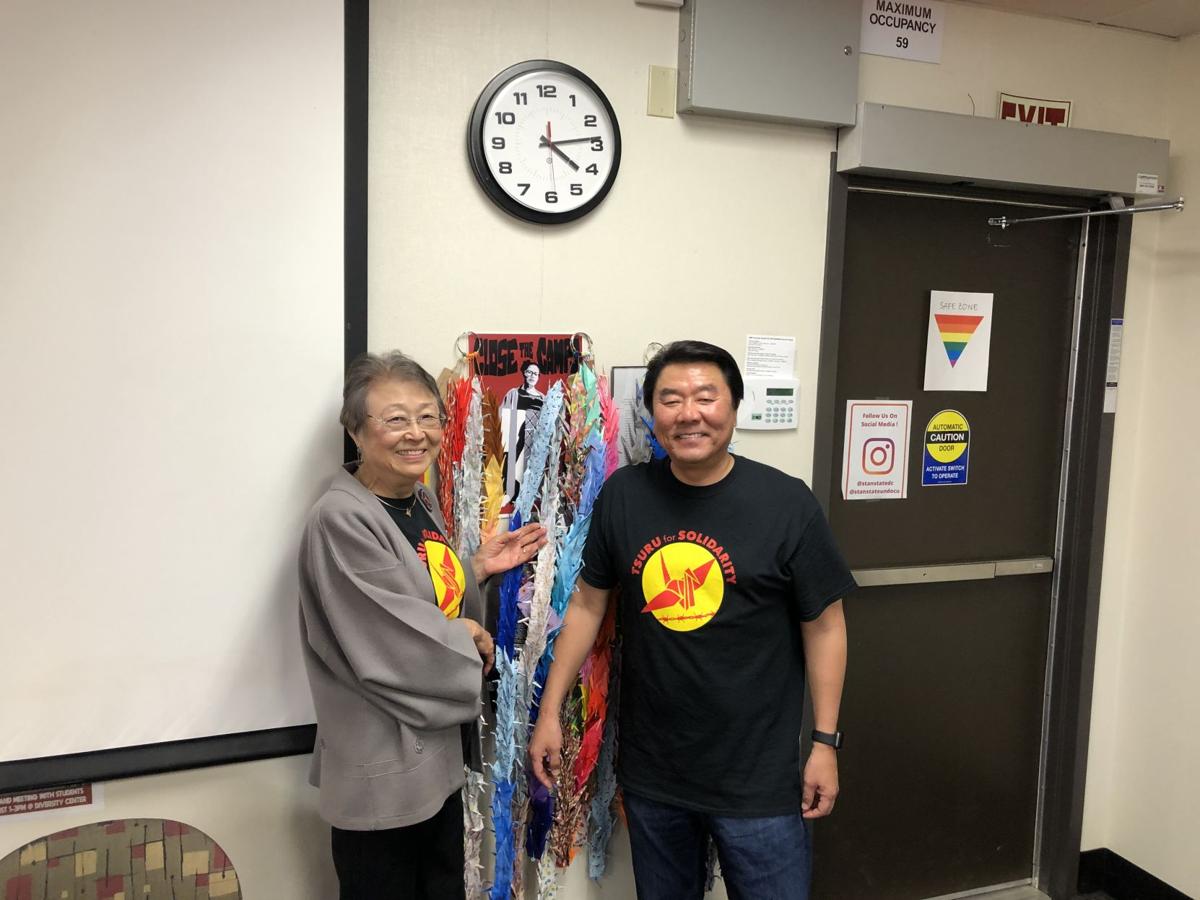 Tsuru of Solidarity presenters Josh Kaizuka and Christine Umeda showing off the paper cranes that students can make at the Diversity Center. Kaizuka explained they 125,000 cranes for their next rally and any help reaching that goal is more than welcomed. 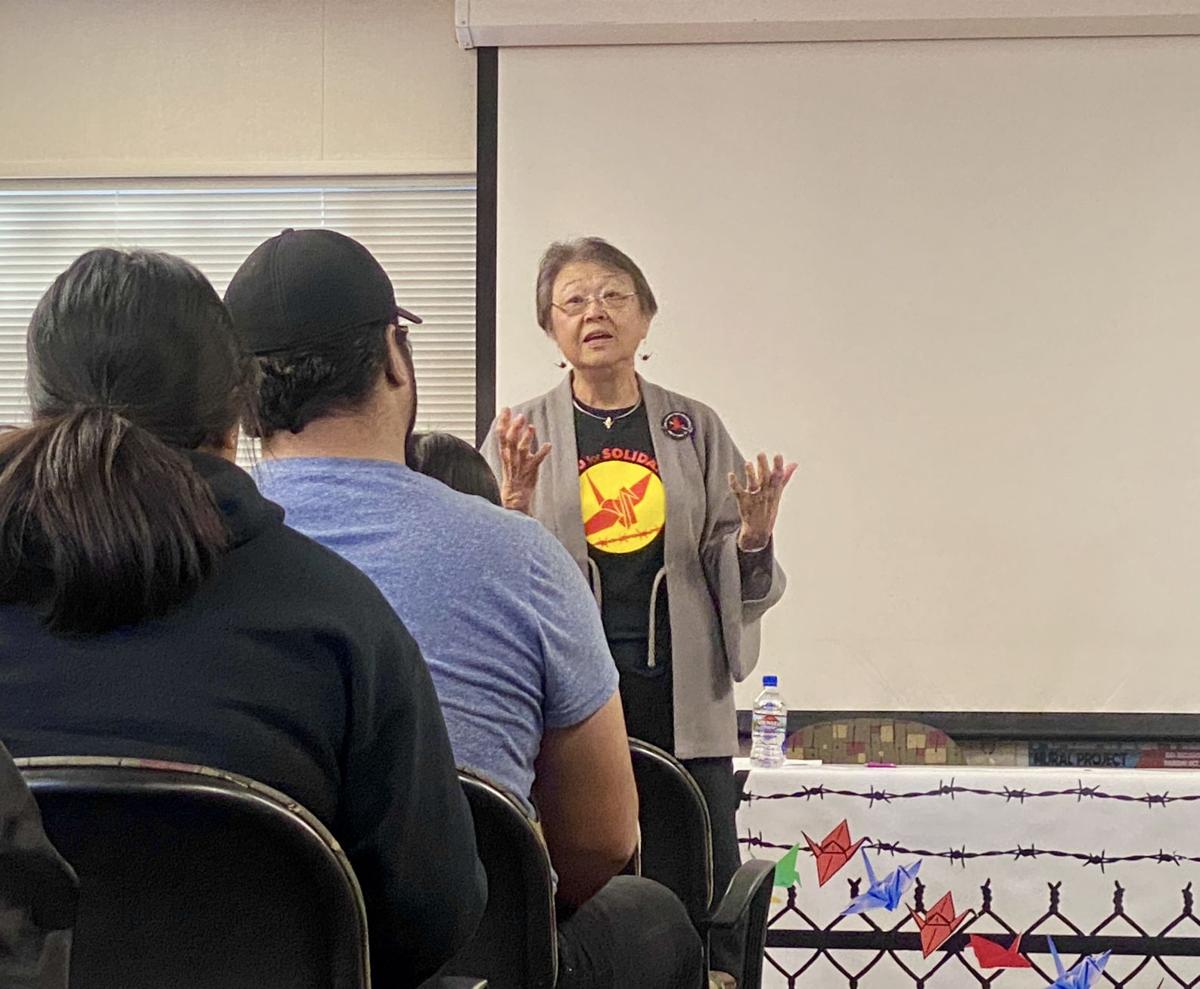 Tsuru for Solidarity's Christine Umeda discussing her experience in a Japanese internment camp as a child. (Signal Photo/ Randel Montenegro) 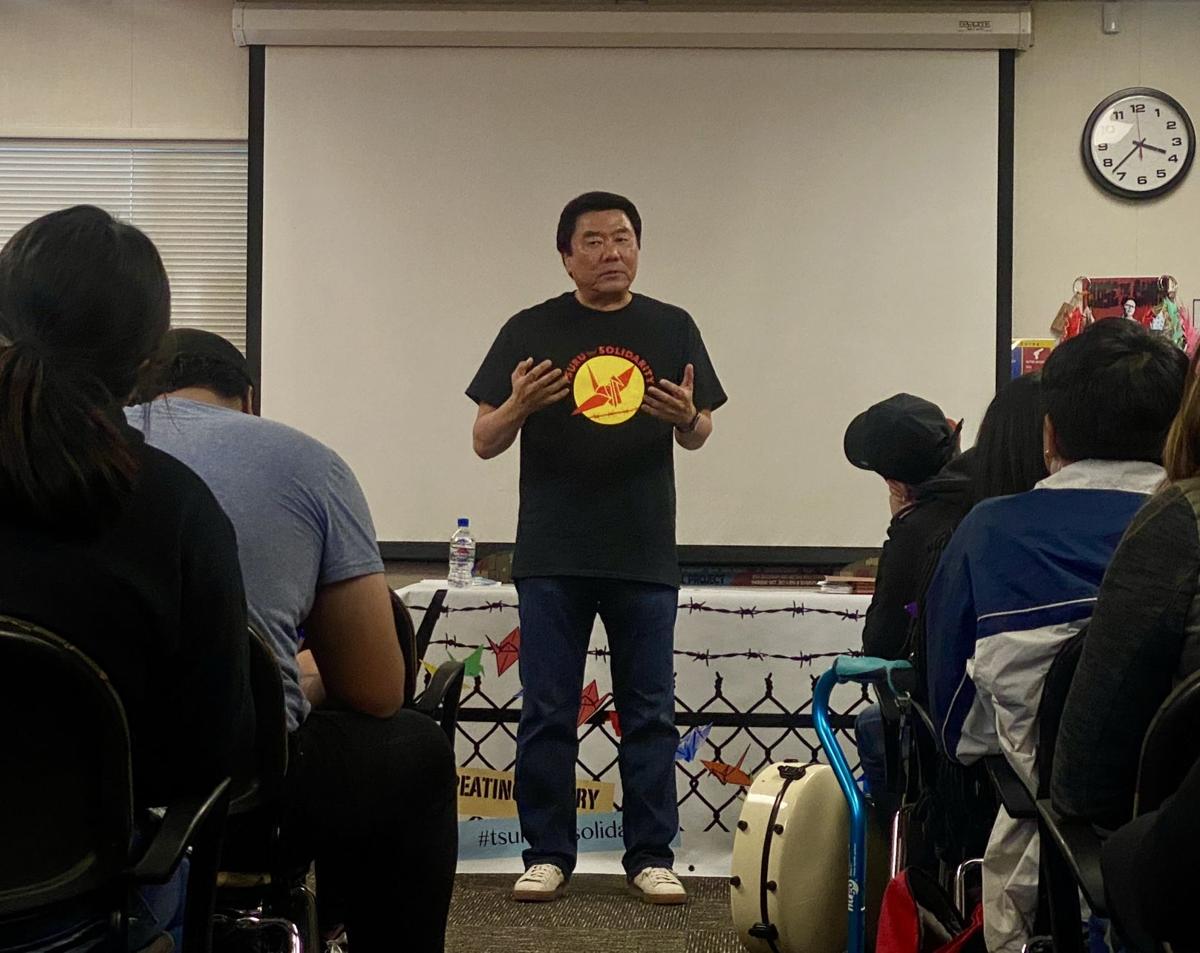 Tsuru for Solidarity's Joshua Kaizuka discussing the importance of the Day of Remembrance and attempting to spread awareness. (Signal Photo/ Randel Montenegro)

Tsuru of Solidarity presenters Josh Kaizuka and Christine Umeda showing off the paper cranes that students can make at the Diversity Center. Kaizuka explained they 125,000 cranes for their next rally and any help reaching that goal is more than welcomed.

Tsuru for Solidarity's Christine Umeda discussing her experience in a Japanese internment camp as a child. (Signal Photo/ Randel Montenegro)

Tsuru for Solidarity's Joshua Kaizuka discussing the importance of the Day of Remembrance and attempting to spread awareness. (Signal Photo/ Randel Montenegro)

On the eve of the 78th anniversary of the passing of Executive Order 9066, the Tsuru for Solidarity project spoke to Stan State students, faculty and staff about the similarities between Japanese-American internment camps during World War II and those we see today at the southern border.

Tsuru for Solidarity describe themselves as “a nonviolent, direct action project of Japanese American social justice advocates working to end detention sites and support front-line immigrant and refugee communities that are being targeted by racist, inhumane immigration policies.”

Tsuru for Solidarity members Joshua Kaizuka and Christine Umeda spoke to a crowd of 77 people, sharing stories about the camp conditions in the 40’s, showcasing their recent protesting efforts and urging all in attendance to be apart of a positive change.

During the intimate reception, Ina described her experience at the internment camps as repressed memory. Ina was not able to truly comprehend what had happened to her until much later into adulthood.

“When I first started to see images about children being separated at the border, I started to recall nightmares that I would have of being placed in a panel truck without windows and the door slamming and screaming,”  Umeda said.

Umeda had no context as to why she was having those dreams. It wasn’t until she asked her sisters what happened that she finally remembered that it was a memory when her family lived on an internment camp and she came down with pneumonia.

Kaizuka  explained the phenomenon of transgenerational trauma and how many Japanase-American parents tried to prevent their children from knowing of the harsh events during the war.

“In the Japanese- American community, parents wouldn’t talk to their kids about what happened… it wasn’t until the redress movement until some people started reflecting back and those traumas really came out and a period of healing started,” Kaizuka

According to Kaizuka, this sort of trauma is something that we see today with the inhumane treatment of children caught crossing the border. “Can you imagine the trauma these children [are] feeling? Some of them are actually born in cages, not just feeling [it now], but they are going to feel it in the future.”

Kaizuka showed the audience videos and photos of some of Tsuru for Solidarity’s protests and explained their slogan and motto of #StopRepeatingHistory.

Kaizuka warned that people would always deny or throw a blind eye towards serious issues in our country. “Keep pounding the fact that things are happening,” said Kaizuka.

Umeda encouraged the audience to use their voice for good and to not be bystanders in any bad situation. “Help diffuse situations. We all have the freedom to stand up for something we believe in,” she said.

At the end of the presentation Kaizuka mentioned that Tsuru for Solidarity is leading a pilgrimage to Washington DC to protest separating families at the border. The event is scheduled for June 5th - 7th.

Kaizuka explained some ways that students could help their cause. If students can’t physically go to Washington DC, then fold paper cranes and string them together to represent peace and solidarity.

“Most importantly, join with other groups that speak up for targeted groups… and find out what you can do so you can make a difference and not be complacent saying nothing,” Kaizuka said.