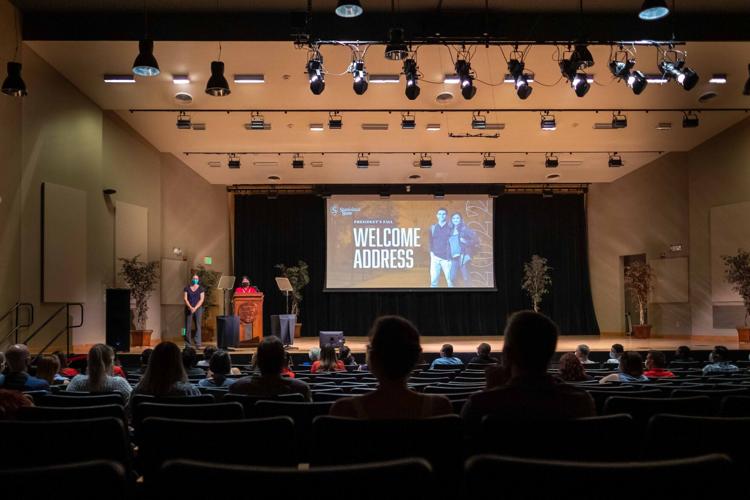 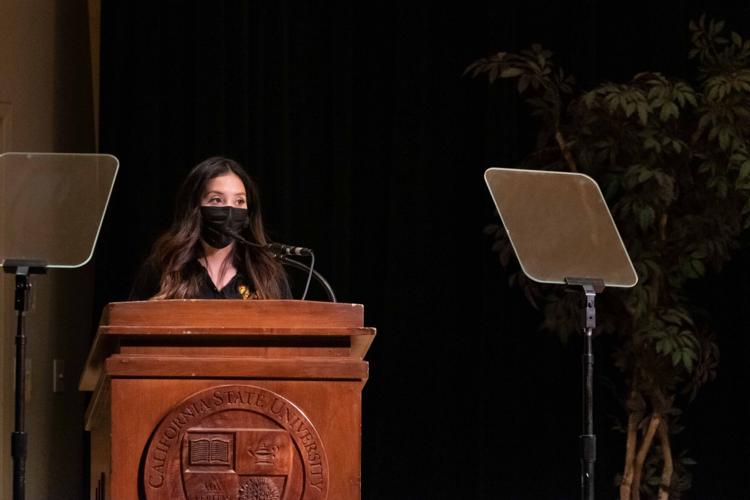 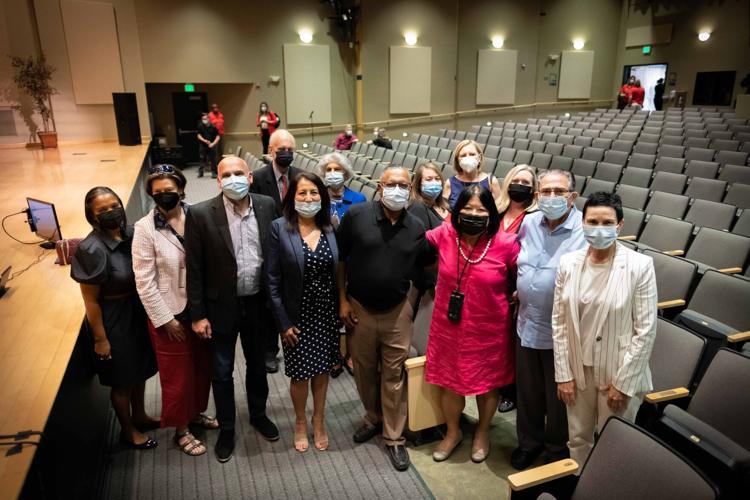 Ellen Junn and her cabinet pose for a photo following the welcome address on Thursday August 18, 2022. Photo courtesy Stan State. 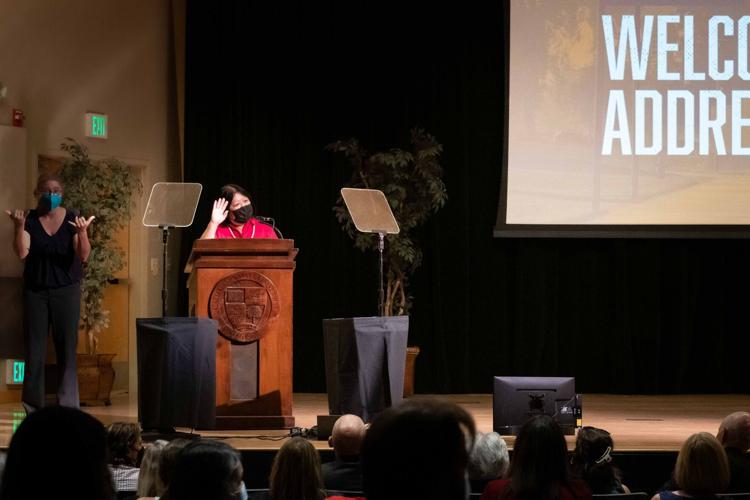 The Stanislaus State community was invited to celebrate the start of the new academic year with President Ellen Junn on August 18. The traditional president’s address felt a little more normal this year, with guests gathering inside Snider Music Hall to hear the address in-person for the first time since 2019.

Before introducing President Junn, Destiny Suarez, Associated Students, Inc.’s (ASI) newly elected president spoke, highlighting plans the ASI board has been working on to make the fall semester one to remember.

“After reflecting on these last years, I truly believe we have embarked on what it really means to be a Warrior,” she said. “Our campus community has struggled and prospered together, bringing to light how strong we are when we work as one.”

Promising that ASI is prepared to rekindle the campus life students once knew pre-pandemic, she announced that ASI has secured approval from the Turlock City Council to wave fees for all Stan State students, faculty and staff who show a Warrior ID on Turlock Transit beginning today, Monday August 22. Suarez went on to discuss the top concerns given by students in an ASI election survey, which included parking issues, more dining options, and tackling issues that might revolve around academic advising in order to support student success.

As Junn spoke Thursday, she reflected in the feeling that fall and a new academic year brings with it.

“The start of the academic year is always an exciting time, because it marks a new beginning that ignites a sense of optimism,” Junn said. “Given the events of the past two and a half years, this semester isn’t just another semester.”

A greater sense of normalcy will be especially noticeable in the increase of enrollments this semester. Although official enrollment numbers won’t be available until the census count in mid-September, according to the university, as of August 15, Stan State expects to welcome 9,608 students to campus, of which 1,059 are first-year students and 1,285 are transfer students. About 77 percent of all fall courses are in-person or hybrid this semester as well. Junn noted that 88 percent of students will be taking at least one of their courses on campus this fall.

With the increase in on campus activity comes an abundance of caution by the university to protect the Stan State community from COVID-19, according to Junn. Stanislaus County has again entered a high level of community transmission per the CDC guidelines, she noted, and students will be required to once again to mask up in all indoor spaces on campus, until further notice.

“When conditions improve, we may be able to pivot to less restrictive masking protocols,” Junn said.

Acknowledging that the university has learned a lot about adapting over the past two and a half years, Junn said, and they’ve used it as an opportunity to improve the college experience.

“From innovative ways of delivering virtual services to yes, using zoom for teaching courses for students,” she said, noting that they will continue to offer options for online and hybrid learning for those who appreciate the flexibility.

But nothing can replace the face-to-face experience of college, Junn noted.

“We know from the research, that college learning is arduous, and from the deepest levels of learning, college should never be a spectator sport or a passive online, anonymous learning experience,” she said.

While most students enjoyed their summer break away from campus, the work being done to the Stan State campus never stopped. Students coming back to campus or just coming for the first time might notice patches of dry grass spread throughout the campus, which Junn explained is by design.

“Because California is now experiencing one of the worst consecutive droughts in recorded history, the university is stepping up to do our part to conserve water,” she said.

The grass on campus is being watered less and groundskeepers are strategically watering to preserve the many trees on campus. Other water saving measures taking place include the planting of more drought tolerant and native shrubs into the landscaping. These measures and many others help make Stan State a leader in water conservation, noted Junn.

“We are always planning ahead to be a strong steward in safeguarding our sustainable resources,” she said.

Many other projects to update the campus took place over the summer. A number of updates to classrooms by the Office of Information & Technology (OIT) have taken place, including updating 30 classrooms to Zoom Room standards with 27 more to be upgraded by the end of the year.

Two notable faculty research grants have also been awarded to the university, Junn announced. For the very first time, NASA has awarded a $620,000 five-year Instrument Grant to the university that will supply two faculty researchers in atmospheric science and up to six student assistants per year. NASA will also supply the university with two ground based atmospheric instruments which will be housed on the roof of Naraghi Hall of Science. A second grant awarded was a 6-year $4.9 million National Science Foundation Grant that will help provide 85 scholarships and prepare students for full-time career opportunities that meet industry needs in the areas of cyber security and data science.

Most importantly, Junn noted, student athletes are continuing to show academic excellence off the field by maintaining GPA’s above 3.2 for a fifth consecutive semester.

Stan State will continue to focus on making strides at its Stockton campus in the upcoming academic year. The university received $54 million in funds to support capital improvements at the campus with another $1 million in recurring base funds to expand the campuses enrollment growth. In addition to five new faculty members being hired at the Stockton campus this semester, students will see a number of facilities upgrades to the student lounge, the recreation room and library, new signage, food services in the library similar to those offered at the Turlock campus, and a soon to be completed food pantry. Junn also said a Stockton campus master plan will commence this fall, which will include designs to update the Magnolia Mansion and enhancements to improve the Acacia facility.

As the university moves forward with improvements at the Stockton campus, Junn said they will also focus on community engagement, which includes sponsoring Family Day at the Park  September 17 at Weber Point. They will also welcome prospective and current students along with their families to Warrior Expo, a culmination of campus activities during Stan State’s Weeks of Welcome.

The annual welcome address, which was also virtually streamed, is available to view on Stan State’s YouTube channel.