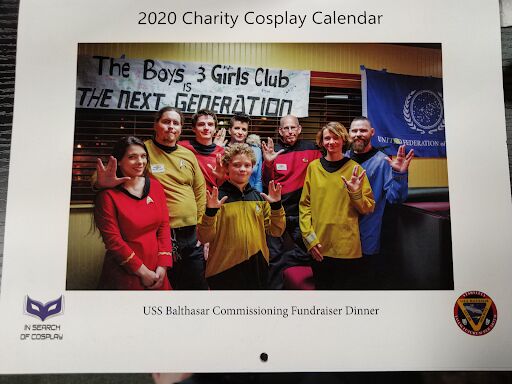 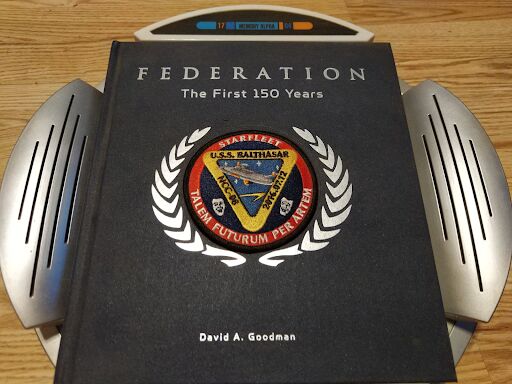 The USS Balthasar is a Star Trek fan club and charity organization based in the Modesto area that supports economically disadvantaged youth involvement in the arts through its fundraising efforts.

The Balthasar was organized in 2016 as part of STARFLEET International, Inc., which is an international Star Trek fan organization. The crew gets together to play games, cosplay, and most importantly, fundraise.

“There are two purposes of the Balthasar: To raise money [to support youth in the arts] and to have fun,” says Bob Van Tuinen (author's father), a US Army Reserves retiree and organization president.

“I have been a fan of Star Trek since I was a kid, since the original series,” Van Tuinen claims.

Van Tuinen explains that, in “non-Covid years,” the Balthasar fundraises and promotes the club at pop culture and comic conventions in the Northern California area. The group’s main fundraiser is the annual cosplay calendar.

“On the fundraising side, our main fundraiser of the year is our annual charity cosplay calendar. We take photos of cosplayers throughout the Central Valley and put together a calendar that is paid for by advertisers. We ask for a $10 donation for the calendars [at conventions],” says Van Tuinen.

Through fundraising and donations, the Balthasar supports multiple organizations within Stanislaus and San Joaquin counties.

“We give money to the Stanislaus County Boys and Girls Club, the Youth Entertainment Stage (YES) Company run by the Gallo Center for the Arts, the Lathrop Area Music Program (LAMP), and this year we gave our first scholarship to a student at Modesto High School who is going on to [Modesto Junior College] to study visual and/or performing arts,” Van Tuinen states.

Van Tuinen explains that these organizations were chosen because they fit the overall goals of the Balthasar, which are to promote visual and performing arts programs as well as supporting underprivileged youth within their organizations.

Van Tuinen believes that it is important to support the Boys and Girls Club because the majority of those served by the organization are underprivileged youth within the county.

The LAMP program that Van Tuinen also loves supporting was established in 2009. It is run by Desiree Bugarin, the music instructor at Lathrop High School, and is focused on supporting children that are super interested in music, but have no music background at all.

The program was created because of a lack of music education programs at the elementary and junior high schools in the Lathrop area and brings children together at Lathrop High School so that they can get started on music education earlier.

“It's even more far advanced than just early musical education because of them being with the high school students. They're getting a more advanced knowledge [of music] of what they should have,” said April Victorine, USS Balthasar member. “It's a more strict, broad based education of music that they're able to learn and still go back to their home school later in the day and go on throughout their day.”

Victorine and her family have been involved with LAMP for many years.

“My husband and I are both musically inclined, and we were hoping that that would rub off on our sons,” said Victorine. “They took an interest fairly early in band, and we were very disappointed when we found out that it was only offered in fifth grade.”

LAMP finally got started once Victorine’s older son was in seventh grade. He was able to be one of the first students to go through the program and continued to be involved in music through high school. Victorine says that the first class LAMP held had between 50 and 60 students and has grown to 200 to 300 students every year.

Victorine says that most of the funds that LAMP receives goes to the buses that bring students in from other schools around the area. Additionally, she says that any time that a student cannot afford something, the instructors tend to cover the costs.

“Most of the fundraising that comes in would generally go for the students that are in an economic disadvantage and aren't able to pay for the uniforms themselves, so it kind of helps carry that burden a little bit,” says Victorine.

The Modesto High School scholarship that Van Tuinen is also very proud of and was awarded by the Balthasar goes to low income students involved in the Performing Arts Academy at MHS and who are going on to attend Modesto Junior College to major in visual and/or performing arts.

Scott Mitchell is a 28-year teaching veteran, with 20 of those years at Modesto High School. Mitchell helped the USS Balthasar set up the scholarship program at Modesto High.

Mitchell has been interested in performing arts ever since he performed at Modesto Junior College. His college experiences helped lead him to teach at Modesto High School and his support of the Performing Arts Academy.

“I wanted to be more involved in theatre; that is literally one of the biggest reasons that I moved to Modesto High. Sure enough, within the first year, I was picked up to be part of what they call the MHETT (Modesto High Entertainment and Technology Training) program,” Mitchell explained. “I was involved, from that point on, in every production.”

The Performing Arts Academy is a program that allows students to focus on both performing arts and the technical aspects of the art and pulls in students from elsewhere in the district. It allows students to engage in acting, stage management, sound and light design, and make-up design for productions. Mitchell explains that the students spend time in many of their classes throughout the program.

“The Performing Arts Academy at Modesto High School is a program where students can come in and be a part of a family atmosphere, if you will. A lot of them have, historically, not done very well in school,” said Mitchell. “It is definitely a program to help students find their footing.”

“There's active students that are learning the process of stage management or even ticket booth management and sales of concessions during productions,” said Mitchell. “We tell them from the time they are freshmen all the way through senior: If you want to work in the entertainment industry in any way, shape or form, the real jobs are behind the scenes.”

The Performing Arts Academy has taken a bit of a hit during the pandemic with virtual education. Mitchell says that the devices that the students have are unable to run Adobe Premiere Pro, which is part of the classes he teaches. He has to share his screen while teaching to walk students step-by-step through the process without the added benefit of the students getting to work hands-on with the program.

"I can share my screen [and] show them exactly how to do the things that we do. There's a lot of video that I have the students engage in, so I find really good content and quality information, but I can only sort of hand feed it to them," says Mitchell.

Mitchell is very grateful for the work the USS Balthasar does, and thinks that the program and the goals of the Balthasar are well matched with what the programs at Modesto High are trying to accomplish.

He states, “The Performing Arts Academy has to be 80% of the underserved population, so these are kids that [get] free and reduced lunch. These are kids that have challenges at home: one parent home or low income. There's lots of disadvantages that a lot of our students have. The Performing Arts Academy itself is a vehicle for those students to try to get them in the right position."

Mitchell expresses pride in the Modesto High School Performing Arts Academy and the students’ accomplishments. “It's just a really great program, and getting those kids to walk across the stage at the end of four years is just a huge thing for us."

Van Tuinen says that the best place to keep up to date on the activities of the club is facebook.com/ussbalthasar. There is also an Instagram and website that has information on how to donate.