You are the owner of this article.
Edit Article Add New Article
News ▼
Arts & Entertainment ▼
La Letra Ñ ▼
Opinion ▼
E-Edition ▼
Archive
Multimedia ▼
About Us ▼
Share This
1 of 5 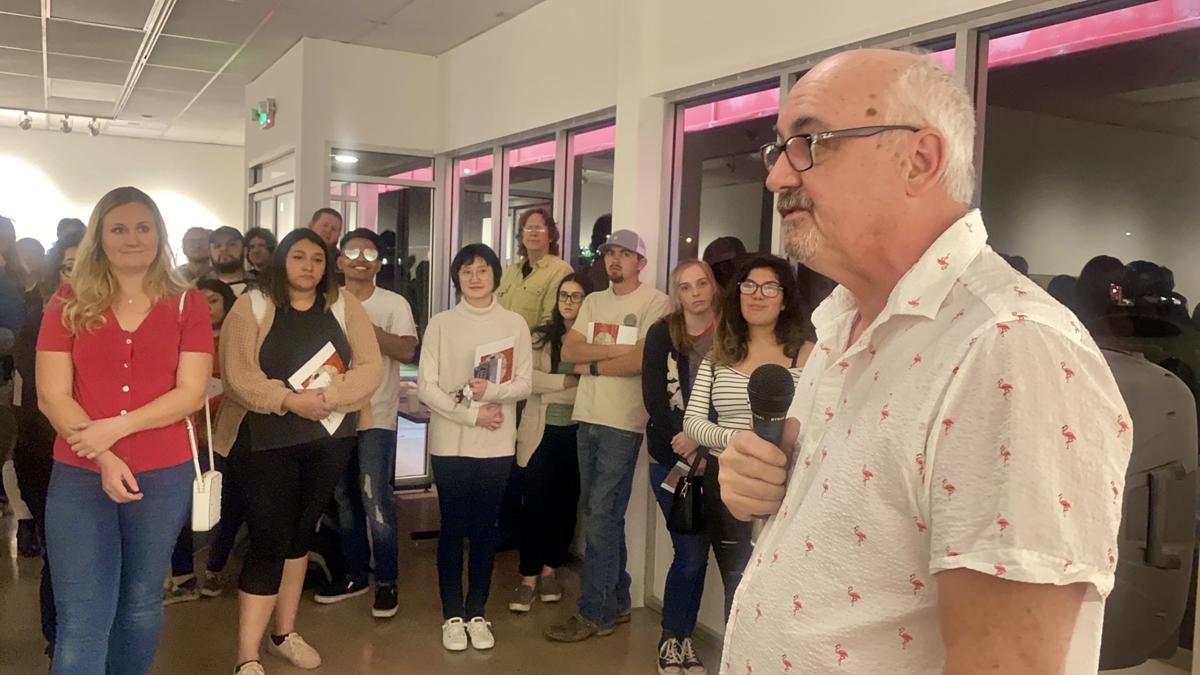 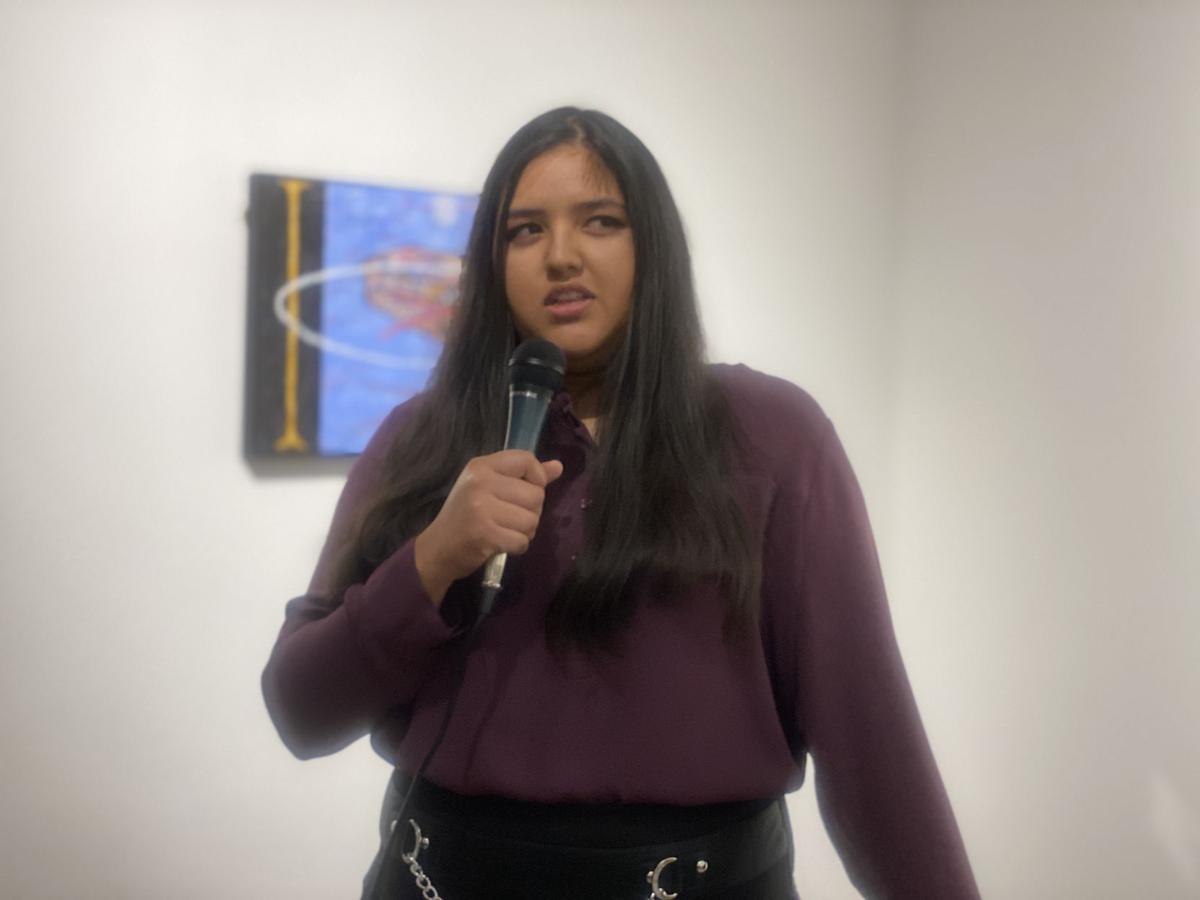 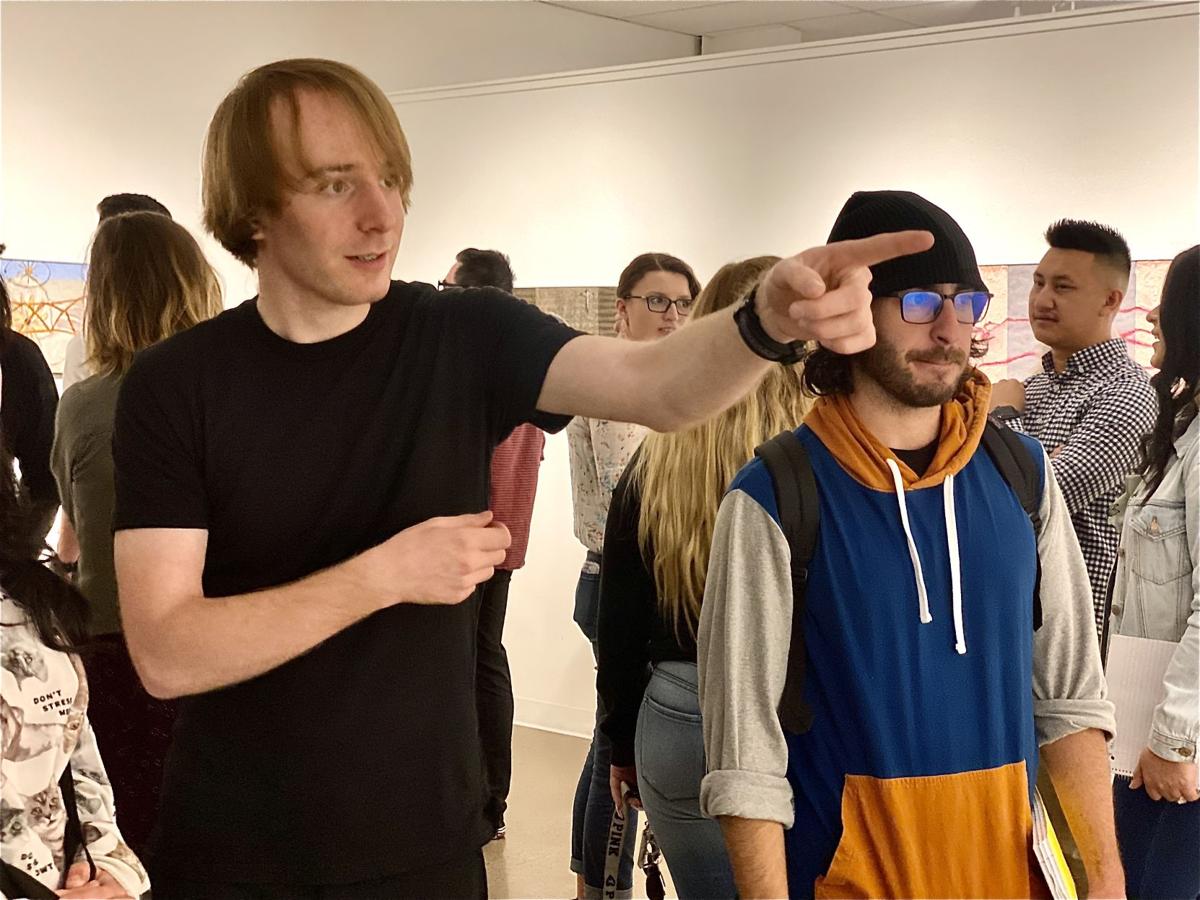 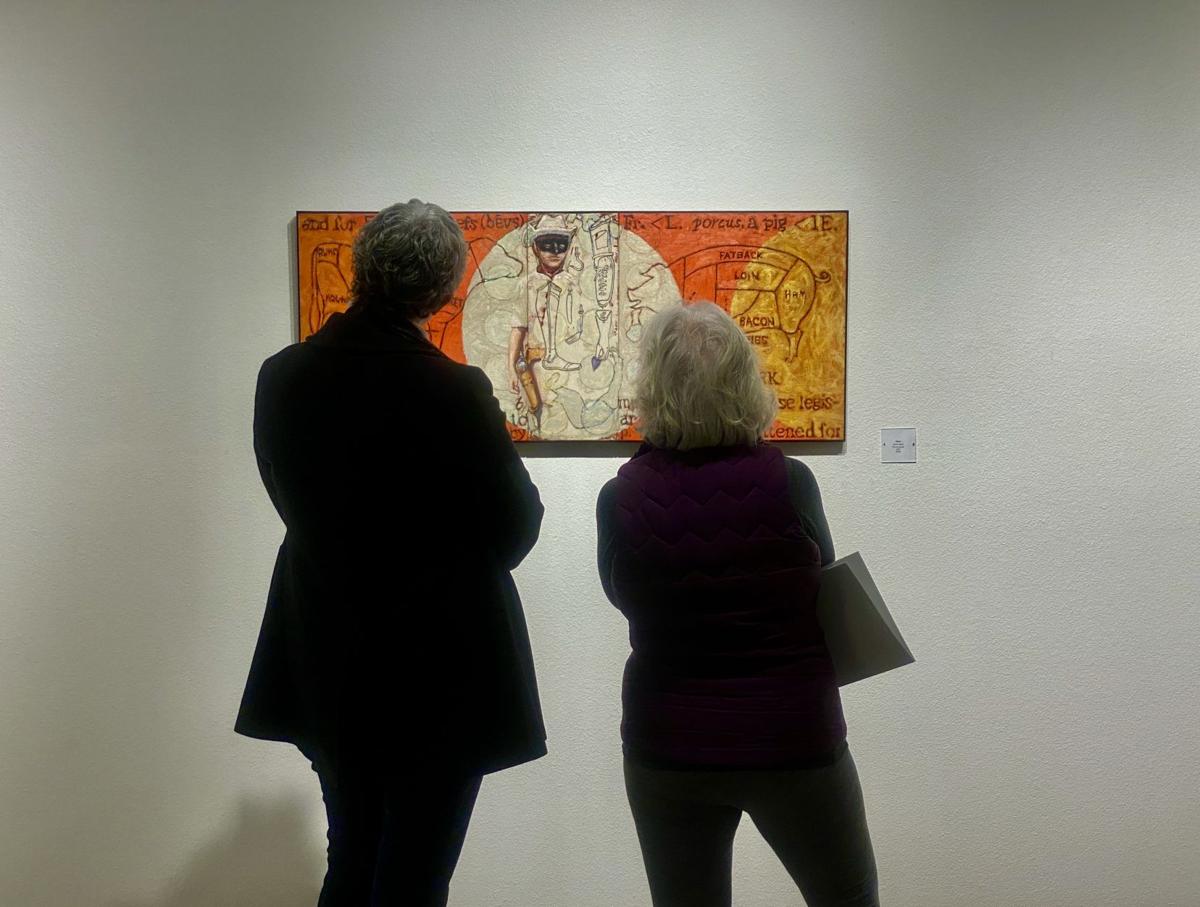 Guests observing an oil canvas called "Hero" created by art exhibitionist James Deitz. He stated that the message is all about the expectation and reality of heroism and military service. He mentioned that the painting is open to interpretation. (Signal Photo/ Randel Montenegro) 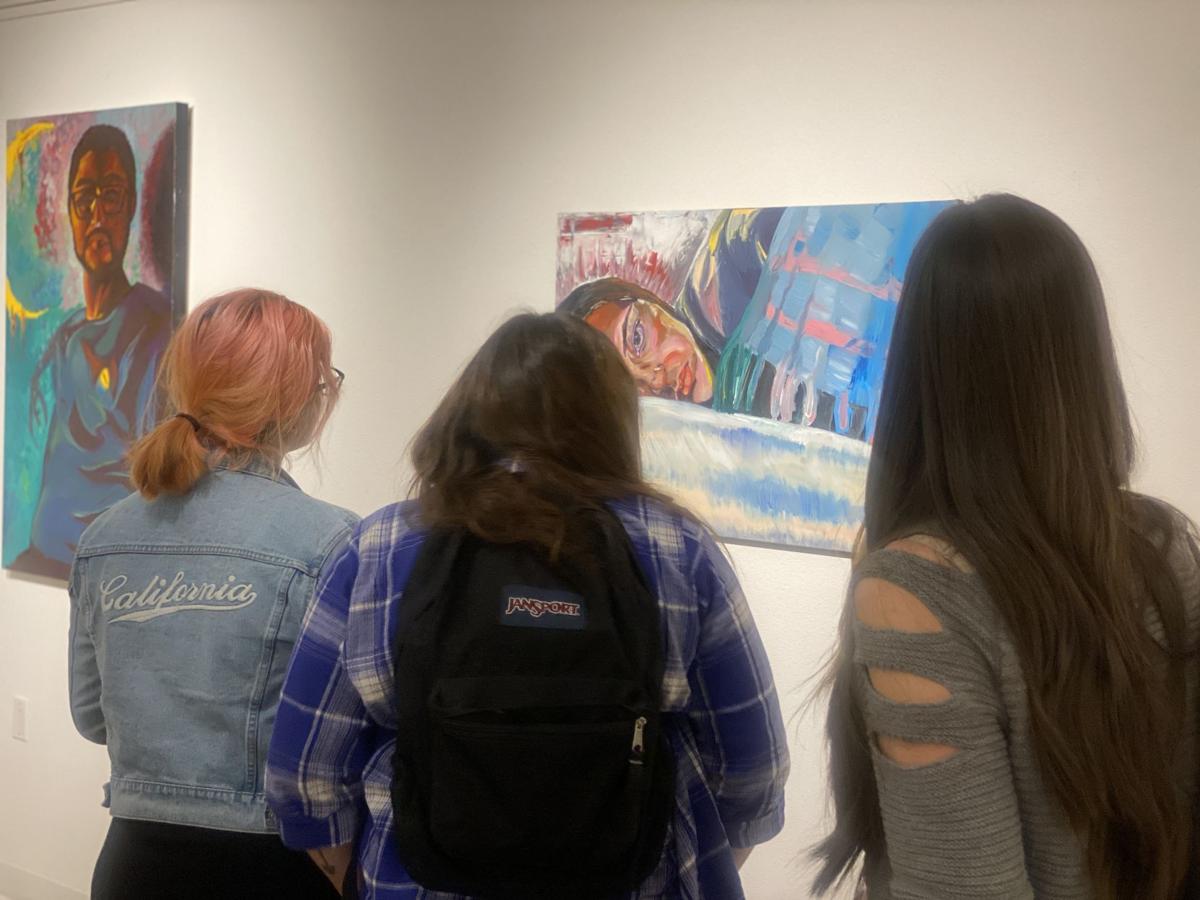 Three Stan State students observing an 2018 oil canvas called "Void" by Elizabeth Ruvalcaba which the message brings an experience of negativity and sadness that the artist learned from other individuals in her life. (Signal Photo/ Randel Montenegro)

Stan State's Bachelor of Fine Arts (BFA) program hosted it's monthly art show and reception at the Art Space in downtown Turlock. Hundreds of Stan State students gathered in curiosity and awe as they listened eagerly to artists like James Deitz and Elizabeth Ruvalcaba talk about their creations and field questions from BFA students.

Local artist and professor James Deitz explained how his story-telling approach helped shape one of his finest pieces of art.

“Mostly, I have a thought about something, an opinion. The most fun is when the other side [of my opinion] is presenting. It’s kind of like a debate. One of the classes I really think I should have taken in high school is debate because I wanted to have the instructor say ‘You are passionate about this, but you have to take the other side and present it in the strongest case possible,'” Deitz explained.

“When I am working on something it’s like, 'How many different scenarios can I get back into one small square [painting] or horizontal piece or whatever,” Deitz continued.

Deitz later answered questions from several BFA students about his coming of age experience that helped influence his paintings.

After Dietz wrapped up his talk, Elizabeth Ruvalcaba followed and discussed the thoughts behind some of her works of art, which include some emotional themes of family, conflict, uncertainty, friendship and inner struggles.

“Usually, it’s either experiences or from those experiences I started imagining...I kind of start to imagine like that’s my negativity manifesting…,” Ruvalcaba said.

"You can't really tell what they [the figures in her paintings] are feeling, but your seeing it. In real life, that moment goes away real fast but in a painting, you have to stare at it and you know something is happening...," Ruvalcaba explained.

There is a variety of complex themes that James Deitz and Elizabeth Ruvalcaba used that help them create their pieces, which includes politics, depression, taboos, social issues, real-life experiences and personal opinions.

The goal of this months reception is to help students better understand the illustrations, artistic themes and influences that this month's featured artists displayed in their paintings.

BFA students Ricky Pelos (junior, Art) and Evan Young (senior, Art) were among those that were attracted to Dietz’s work.

Pelos found the oil canvas painting “Lost and Found” to be a personal “development” of Dietz’s work. “I think it’s very unique and it’s very dynamic. A lot of it, I think, is very personal...That’s what I think of the art,” Pelos said.

“I am learning to maybe expand my thought process...and make stuff more impactful, instead of just having something there as an image. I think it definitely means something,” Pelos continued.

Evan Young (senior, art) was mentored by Dietz, who helped Young and many other BFA students through his apprenticeship.  “I took two drawing courses with Dietz. I am fairly well in his classes. He liked a lot of my work so I guess it’s interesting to see his works directly,” said Young.

Young liked the composition, narrative and use of medium throughout Dietz’s art work.

Maria Davila (senior, Art) described one of Ruvalcaba's paintings. “They just capture those darker emotions that are harder to articulate, but she still manages to catch the colors and expression. The movements, there's a lot of hand [work] in these two particular paintings, ‘The Ticking Time Bomb’ and ‘Red,’ that I feel really help create these emotions of anguish and general feelings of not being in a good place,” Davila said. “I think it’s really hard to talk about, but she [Ruvacaba] is opening a really important conversation... I really enjoy that. I think it’s brave and I think it does it so beautifully,” Davilla continued.

Many BFA students and faculty aspire to become professional artists. The exhibition helps deliver an ambitious vision to push young artists to create more pieces that can help display forms of narrative and emotion for future generations.