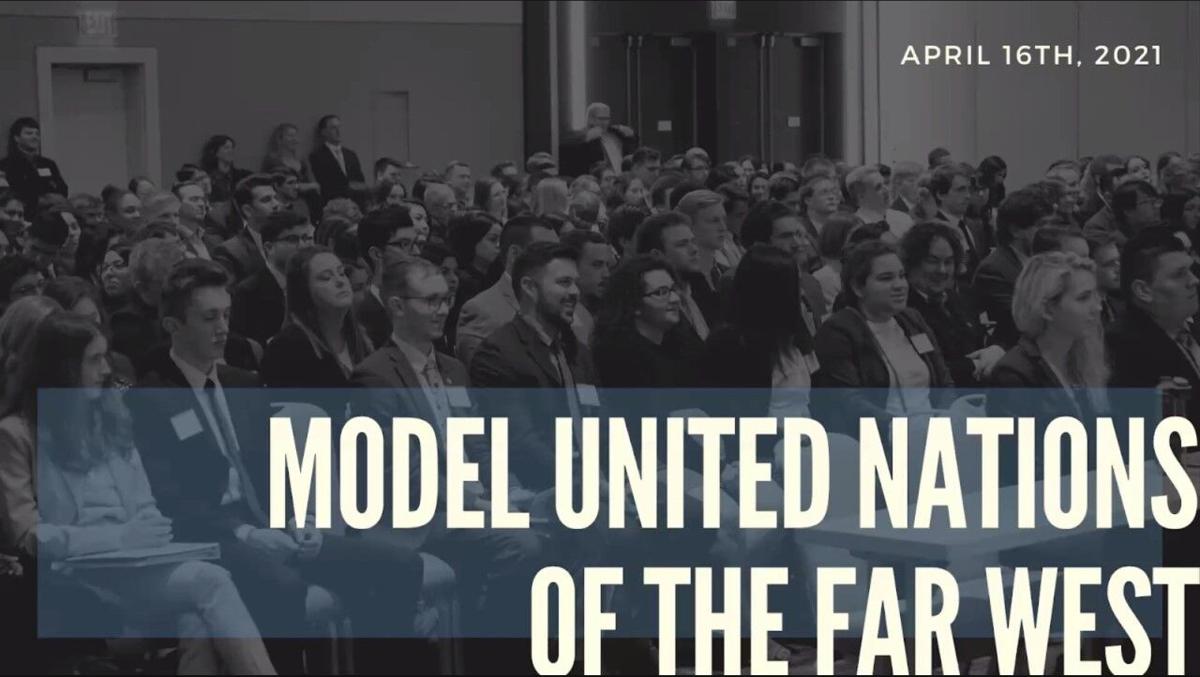 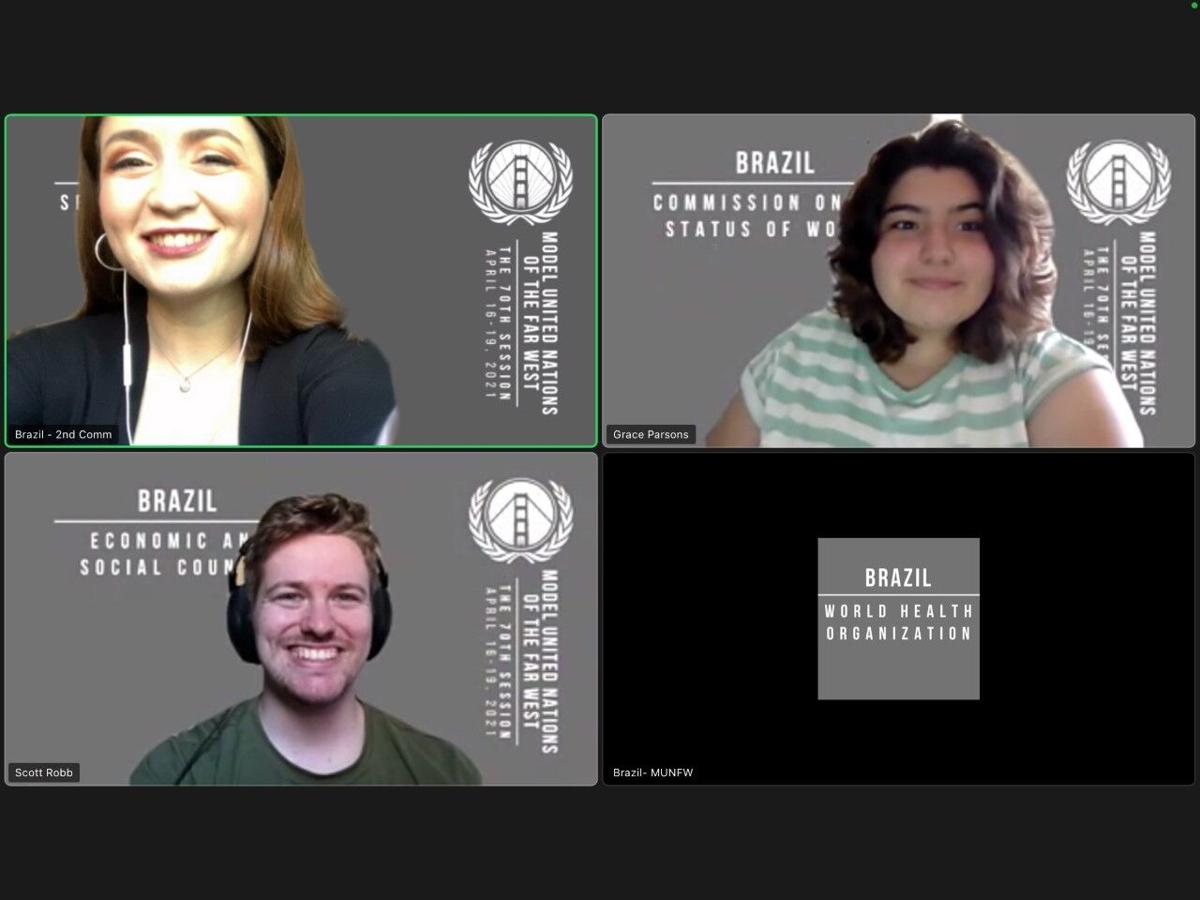 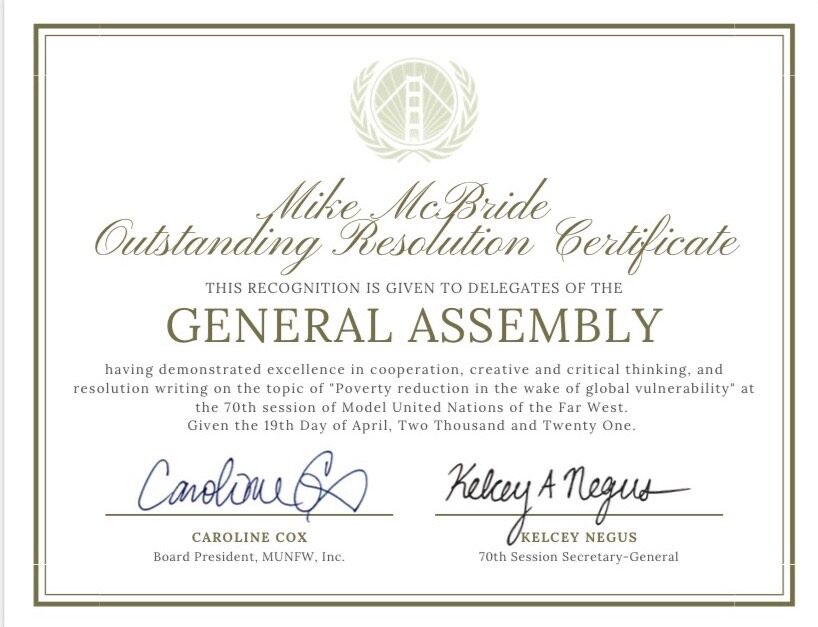 Award granted to all the students in the General Assembly Committee, including the Signal's very own Sandra Plascencia-Rodriguez. The award is for the entire Model UN class at Stan State. Screenshot taken by Jessica Silva.

The following weekend after spring break, Stan State students took part in the 70th Model United Nations of the Far West Conference. It was the first time the conference has ever been held in a virtual format, and as most things have been held virtually, it sure was memorable for all of those who attended.

The conference was a requirement on behalf of the Model United Nations class held at Stan State and taught by Dr. Andrew Conteh, a Political Science professor. The class is meant to be a mock version of the United Nations, in which a college and/or university is selected to represent a country or countries in a mock United Nations session that occurs halfway through the spring semester. This semester, the class represented the country of Brazil, continuing the work of the previous class in 2020 who could not complete the work nor participate due to COVID-19 restrictions.

“This program is not just for Political Science [majors], in the UN there is room for everyone,” said Dr. Conteh. “There is room for people in Women Studies, Multicultural Studies, Environmental Studies, Business, hardcore sciences, everyone is welcome.”

This spring semester, there were only six students that enrolled in the class, but nonetheless they made the best of it. “I think the class was fun, it was really informative and it covered a lot of topics that I wouldn’t have been able to learn anywhere else,” said Grace Parsons (sophomore, Political Science).

Aileen Aleman (senior, Political Science) agreed with Parsons on the way Dr. Conteh teaches the class. “I thought the professor was super in depth and prepared me well for the conference...I think that derives from him being so passionate about his topics."

Dr. Conteh explained that the class is also important in promoting CSU Stanislaus, of which he hopes that students of the class represent themselves as the best ambassadors of CSU Stan. There were many institutions on the West Coast extending to the Midwest that also participated in the Conference, as well as an institution from the Philippines.

“I actually had a lot of fun at the conference because I got to kind of seek out different political allies and different countries on different positions...then kind of pick out the enemies out of it and press them with hard questions,” said Scott Robb (senior, History).

“I had a good time, I definitely would have liked it if we had actually been in-person, but overall it was fun,” said Aleman, referring to her experience with the Conference.

Dr. Conteh has served before as a delegate to the actual United Nations on behalf of Sierra Leone, a country in West Africa. With his experience of being a delegate and an ambassador, he first went to Minnesota and taught international politics, including Model UN, at Minnesota State University Moorhead. While he was there he was awarded the Minnesota Professor of the Year award in 1999 and established the Andrew B. Conteh Student Academic Conference at the university.

Since coming to Stan State, Dr. Conteh wants to make it known that students “should expect one thing, that I have invested interest in making sure CSUS is known out there. It’s about promoting CSUS as a learning institution.”

Dr. Conteh would also like to extend his gratitude to Dr. James Tuedio, Dean of Arts, Humanities and Social Sciences as well as his colleagues in the Political Science department for giving him the opportunity to share his passion with his students. The entire class including Dr. Conteh would also like to thank Lisa Anderson, the Politics and Public Administrator, for helping them get things ready for the Conference, as well as Tim Held, Stan State librarian for helping them with resources.

The class will continue in the spring and students of all majors are highly encouraged to enroll. The course is under PSCI 4650 and will continue to be taught by Dr. Conteh. It will also teach them leadership skills and research skills, as well as how to be the best ambassador's of Stan State.